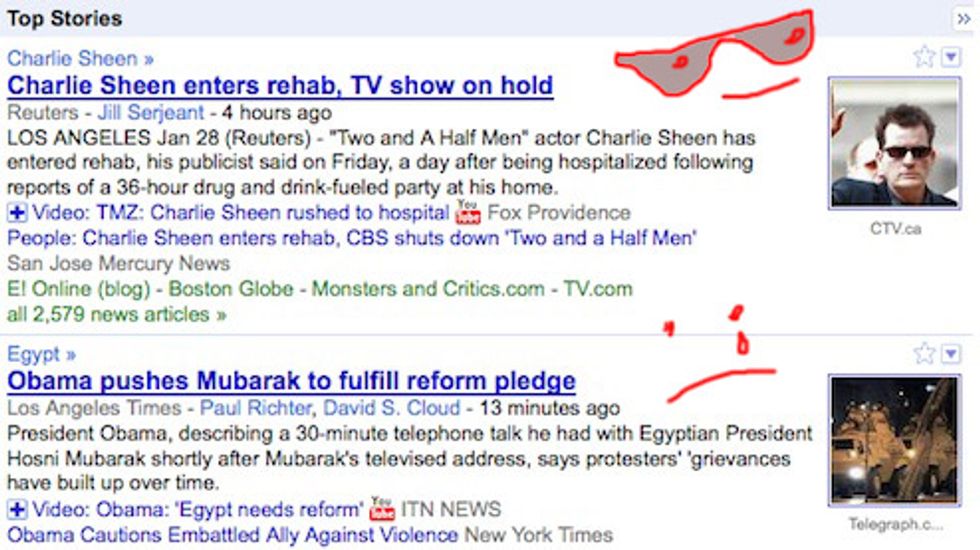 It's time for another episode ofAmerica's Choice: The Final Days, starring wacky cocaine addict/hooker assaulter Charlie Sheen, who is apparently a television star and not just a full-time human joke, and what's it, the place with King Tut. Iran? Guess who lost?

If you said, "Well it looks like America lost," then you hate the troops.

As for the Charlie Sheen thing, remember that his talented father not only made such artistic/commercial successes as Apocalypse Now! and Badlands -- and teevee's The West Wing, for those of you who remember a time not so long ago when a serious drama about the White House was a hit broadcast show -- but he has also spent most of his adult life in the earnest, sober pursuit of liberal causes such as nuclear disarmament, workers' rights, civil rights, women's rights, etc. His talentless embarrassment of a son is a bloated drug addict who abandoned his many children, beat his wife, shot the mother of his first child, and is constantly arrested for violent attacks on prostitutes. (This is all in two paragraphs on Wikipedia. God knows what a half hour's search on the Internet would discover.) America: Where intellectual and moral and cultural collapse are painfully visible from one generation to the next.