American Muslims Raise Money For Vandalized Jewish Cemetery. Just What Are They Up To??? 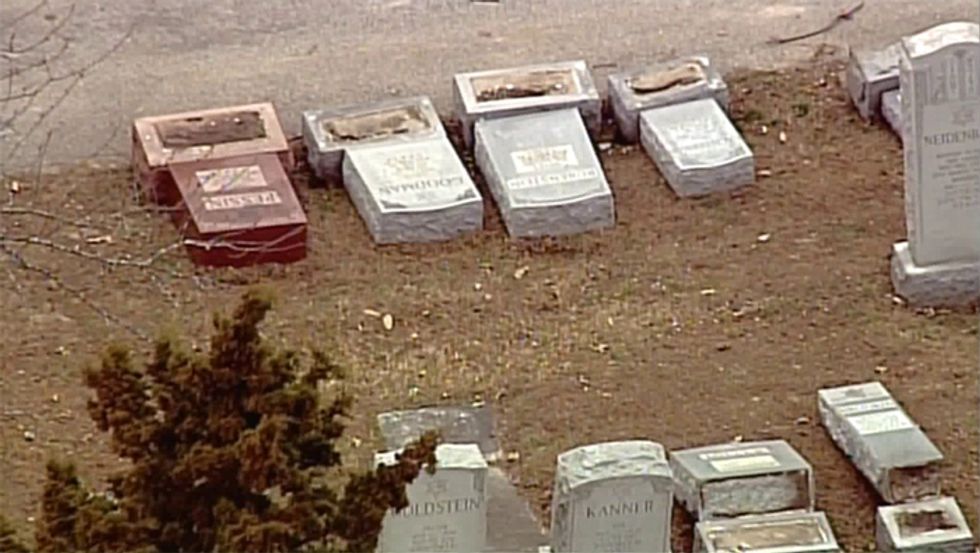 Is anyone investigating whether Sweden was involved?

Here's a little bit of news to restore your faith in humanity, and Crom knows we all need frequent infusions of THAT these days: After more than 150 graves in a St. Louis Jewish cemetery were vandalized over the weekend, a group of American Muslims set up an online fundraiser to repair the damage. The fundraising page at LaunchingGood explained the effort's motives:

Through this campaign, we hope to send a united message from the Jewish and Muslim communities that there is no place for this type of hate, desecration, and violence in America. We pray that this restores a sense of security and peace to the Jewish-American community who has undoubtedly been shaken by this event.

The fundraiser also cited a story about the prophet Muhammad, who, when asked why he'd paused to stand up and pay his respects as a Jewish funeral procession passed by, replied, "Is it not a human soul?" That Muhammad sounds like some kind of darn Unitarian or something there.

And here's the cool thing: The fundraiser met its $20,000 goal in three hours; as of blogtime, the total was just over $77,000. The fundraiser will continue, with a pledge that any funds in excess of repair costs for the vandalism of the Chesed Shel Emeth Cemetery in University Park would be donated to "other vandalized Jewish centers nationwide."

The campaign was organized by activists Linda Sarsour and Tarek El-Messidi; El-Messidi told the Washington Post the story about Muhammad paying his respects to a Jewish funeral procession was the first thing he thought of when he heard the news about the vandalism:

“That story goes to show more than anything the humanity of the prophet. … We should bring the story to life here and show every person deserves to rest in peace,” El-Messidi said. “This is a great way to show respect and honor for our Jewish cousins.”

El-Messidi's nonprofit group, Celebrate Mercy, has previously raised funds for victims of the ISIS-inspired San Bernardino terrorist attacks, and in 2012 organized a letter-writing campaign for American Muslims to send condolences to the family of Ambassador Chris Stevens, who was killed in the Benghazi attack. He'd be one of those Muslim moderates the wingnut right insists don't exist (or are just lying, you know, to fool us). El-Messidi told the Post that the rise of hate crimes against both Muslims and Jews following the election has helped build solidarity:

“This is really a human issue,” he said. “But out of this horrible election cycle, something beautiful has come out of it and [Muslims and Jews have] bonded together to support each other and stand up to this hate. Politics can get in the way of our basic humanity; I hope this breaks through all those walls, no pun intended, to help bring us closer together.”

In response to the fundraiser, a woman named Barbara sent a message to El-Messidi to let him know she appreciated what he was doing:

You have helped to heal the pain in my heart. I live in Los Angeles but was born and raised in St. Louis. I have family buried in that cemetery and was heartbroken seeing the desecration of the final resting place of some of my loved ones. Your kind and loving spirit gives hope to me that we can have mutual respect and tolerance of our differences and shared humanity. Bless you.

El-Messidi said he's been in contact with the director of the cemetery to learn the exact damage estimate, although the figure hadn't yet been determined. He told the Post that any excess money would fund efforts to fight anti-Semitism.

Oh, hatred? Yeah, Donald Trump thinks it's bad. What hatred are you talking about?

So, sure, maybe Donald Trump finally got around to actually saying anti-Semitism is a bad thing, following threats to Jewish community centers and the St. Louis vandalism. But did he donate any money to help repair those graves? If he did, the source of the funds should be investigated.