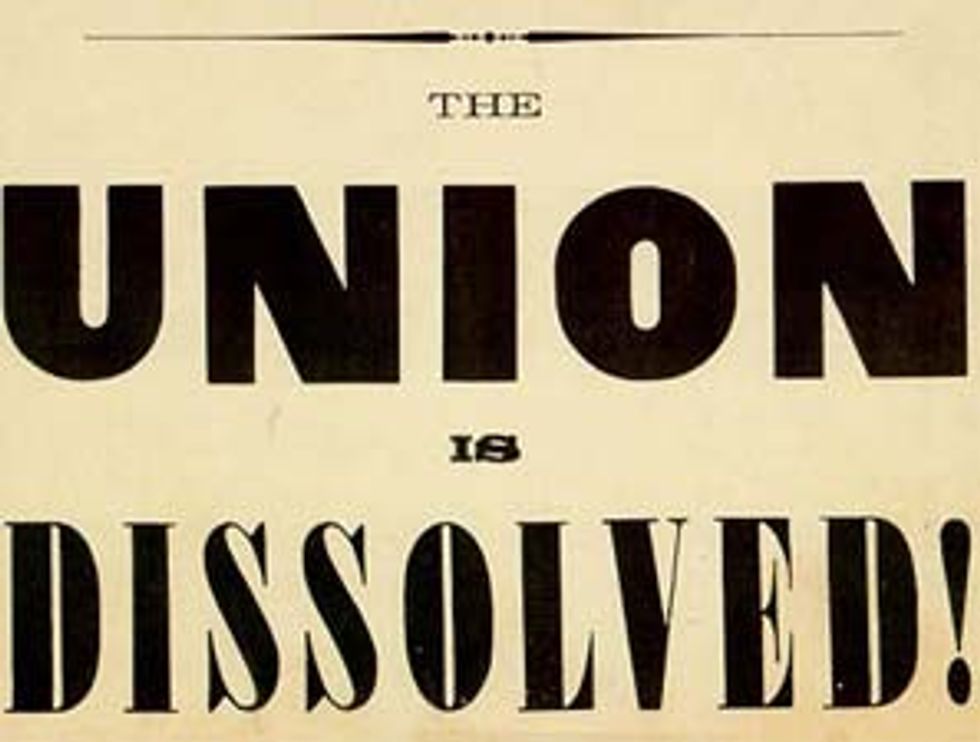 True Americans everywhere are finally wising up to the fact that they will live another four years under the rule of the Nobamanation, and that basically all hope for freedom is now lost. We remember long ago in this nation when a skinny liberal weirdo from Illinois got elected, and threatened to redistribute Real Americans' wealth, by acknowledging that some of that wealth was actually human beings. And those Real Americans responded in the honorable fashion: by founding an entire republic based on the defense of slavery, and waging an insanely bloody war for four years in an attempt to defend it. And so in the year of our Lord 2012, similarly brave souls pledge their lives and sacred honors to fight against tighter regulation of the health insurance industry and moderate increases to marginal tax rates, by using the 2012 equivalent of charging headlong into a wave of Union bullets: adding their names a strongly worded petition on the White House's website.

As part of the Obama administration's commitment to transparency and Internet-y stuff when it came to office in 2008, they put up a page on the White House website where "we the people" (i.e., cranks) could create petitions about any subject. If you can't get even 25,000 people, or 0.008% of the U.S. population, to sign your petition (and "signing" can mean just putting your first name and last initial!), it will be completely ignored. If you manage to get to 25K, some White House staffer will do some half-assed Googling and come up with a list of links that explain why your petition will be ignored, as the marijuana legalization people discovered.

Anyway, now people from pretty much the states you'd expect are signing on to petitions demanding secession from America, in order to form a better America. They quote generously from the Declaration of Independence, which is funny considering that the actual signers of the real Declaration of Independence were considered traitors and were hunted down by vicious Hessian mercenaries, while these brave souls will have an unpaid intern roll their eyes at them. Texas and Louisiana are coming pretty closed to getting an actual snooty response from the White House, though! It will no doubt be more or less identical to the helpful note from the Kansas City Star, which gently informs its readers that "the petitions have no legal significance, and the constitution does not allow states to unilaterally secede from the union."

Meanwhile, Rick Perry, who was always threatening to break Texas away from America while he was trying to run for president of America, which was an interesting strategy, now "believes in the greatness of our Union and nothing should be done to change it," what a little baby. [WaPo/KC Star/HuffPo]

Let's Do MORE Shopping At Our Readers' Stores!

Yes, Gov. McMaster, South Carolina Is ‘Unique’ But Everyone Still Needs To Stay The F**K Home

Trump Firing Intelligence IG For Doing His Job? Sure, Why Not?