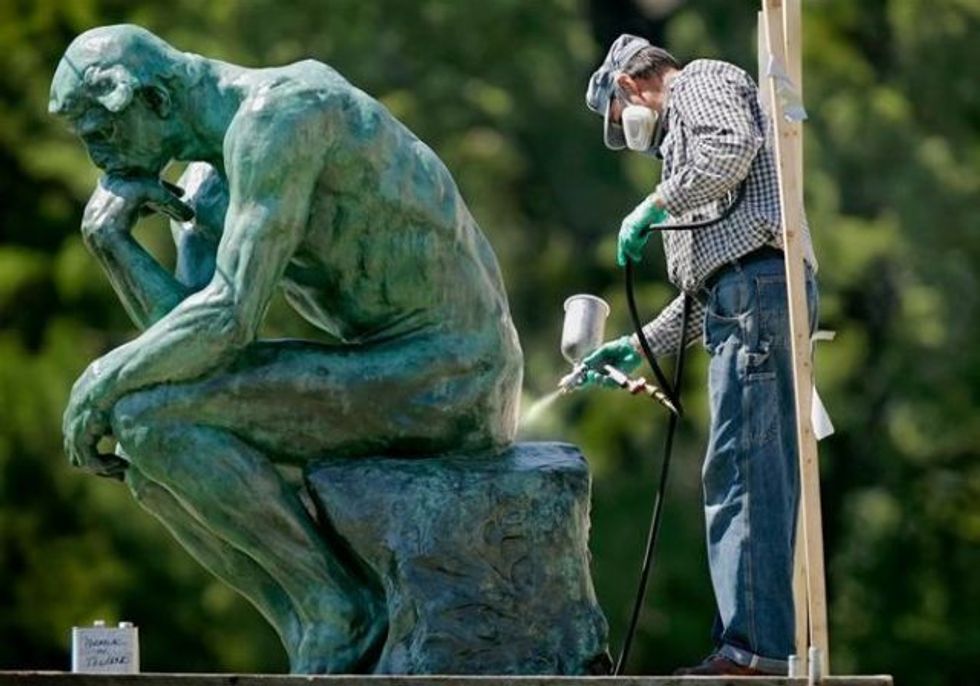 cleaning up the american thinker's shit has got to be the worst.

Where were we? Oh yeah, those letters. They always followed a formula that was somehow completely predictable and completely outrageous at the same time. You could guarantee that the framework would be a boring intro like "I'm a college sophomore and I never thought I'd be writing this letter" and the actual tale would be something over-the-top like "four hot motorcycle babes fucked me, and the fifth availed herself of my car's stick shift to finish herself off." Nobody has to write these things any longer because no one needs to read them. We can just fire up PornHub/PornTube/TubePorn/whatever and go to town.

Unless, of course, you're a conservative, in which case you think God frowns on you spankin' it to actual thoughts of naked people or gearshifts. You have to repress that sexual energy, squeeze it down into a white hot ball of rage, and let it burst back forth in completely inappropriate and weird ways, like this insane guest column from David Prentice over at "American Thinker" about how he learned to stop worrying and love the Donald. Just like those Forum letters of yore, it starts exactly as you'd expect -- he never thought it would happen to him -- and promptly veers off into a completely nonsensical stratosphere.

Prentice starts out his fap fodder by explaining, of course, that his love for Trump was a long time a-comin' because at first he loved Ted Cruz because Ted Cruz is the straight-up reincarnation of Saint Ronnie. But slowly, surely, the Donald taught Prentice the ways of loving the Donald. First, though he did not yet love Trump, he watched the cruel liberal media mock Trump for doing nothing but saying the truth, and Prentice's love began to take root.

He first spoke of the problems with illegals from Mexico. He was called a racist (wrongly, but you know our media), and given the raspberry by every one of the GOP candidates other than Cruz. As you may have guessed, I think the issue of illegals is one of the biggest that face us today. I watched as Trump was given the normal crucifixion by our media, our own party joining in. I begrudgingly watched him gain a victory and marveled as he actually won one of the first PR campaigns against illegals in the public mind. Sanctuary cities were shown to be wrong, and the American public saw that, indeed, illegals were a large source of violence and wrongdoing.

If you're oh-so-quiet, you can hear the first stirrings of David Prentice's long-neglected penis. Christ. We even grossed ourselves out thinking of that. Moving on.

So Trump hates "illegals" as much as Prentice does. You know that Prentice felt oh-so-daring typing "illegals" so many times in that paragraph, a naughty stupid schoolboy who has just learned that you can look up the word "vagina" in the dictionary. Prentice goes on to explain that he really started to feel swoony over Trumpkins when Trump said he hated Muslims just as much as Prentice did. Soulmates! Trump would be riding little David's gearshift in no time!

Of course, it took Trump hating Hillary for Prentice to really come around, and here's where things go Full Fap Fantasy.

Then the earthquake happened: Hillary attacked him as a misogynist and a sexist. Oh no, he’s done for now. But no, he retorted with one tweet, and one paragraph lambasting the Clinton’s prior activities with women, highlighting the Clintons’ hypocrisy. The press reported it. The Clintons skulked away without responding. The press wrung their hands, talked about it, had panels, articles, and in the end Trump won the first victory any GOP representative has had with the Clintons. Her popularity dove, an entire generation was hearing for the first time what had happened. Inconceivable. One tweet, barely one paragraph.

That shook me to the core. Then someone showed me an article in December where Ted Cruz had stated that the Clintons’ sexual history had no place in his campaign. The light went on. Two weeks later after reassessing my preference, I switched from Cruz to Trump.

How do we even begin to unpack the silliness here? First, we really do not recall Trump devastating or eviscerating or defenestrating Hillary ever, much less with one tweet, and we certainly don't remember any panels about it?? And "an entire generation was hearing for the first time what had happened"? Really? Like your side of the aisle hasn't been talking about how Clinton got his knob polished by a lady that was not Mrs. Clinton for the last 20 years??? And finally, of course, the supreme nonsense of being completely desperately wholeheartedly in favor of Ted Cruz until Ted decided that he didn't want to spend his presidential campaign speculating about Bill Clinton's penis. (Also, if how one treats women is fair game in the electoral process, Mr. Prentice will be saddened to learn that Trump is not a shining example of how to treat women.)

Prentice wraps up by circling back to reminding us that he loves Donald because Donald hates illegals and Muslims also too, just like David Prentice does! Most important, though, is the winning. The big strong handsome winning.

He knows how to win. He will win [...] When he wins, he will have to implement the agenda; we need someone who has that same strength to take the barbs that will be flung by the democrat/media complex (and our GOP sellouts). The new (R) President will need to be strong; they will try to destroy him every day. He will need to be able to form a narrative about the media, he will need to handle the PC police, and he will need to be resolute.

You will note that paean to Trump's winnability does not actually explain how he will get his agenda through if he is beset on all sides by Democrats and RINOs, but that's the beautiful part of a complete fantasy: it doesn't need to make any goddamn sense at all.