Americans Swear To Remember To Blame GOP For Shutting Down Homeland Security, LOL 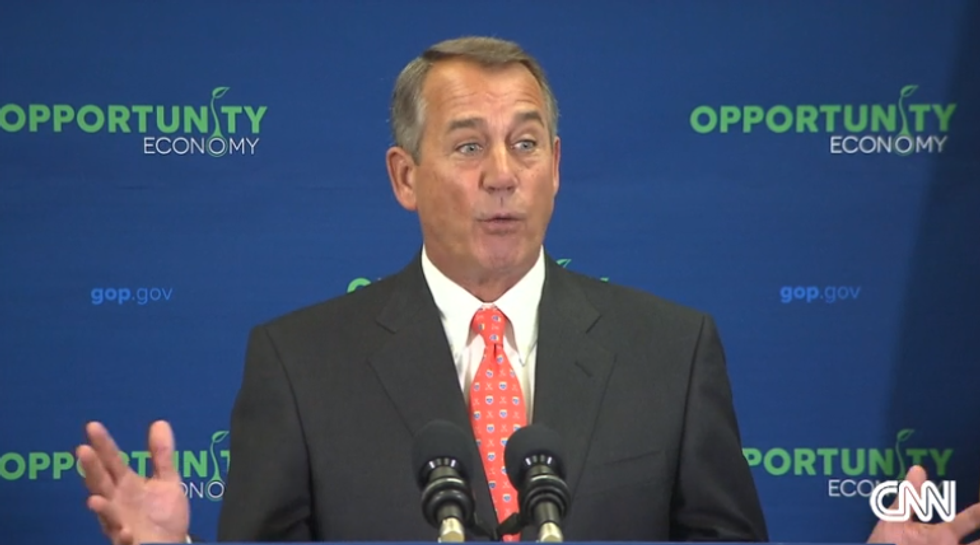 Republicans have a terrific plan to humiliate President Obama by refusing to fund the Department of Homeland Security unless he promises to stop hearting those damned Messicans. This is flawless plan, obviously, and proves how, with the Very Grown Up Republicans finally in charge of the entire legislative branch, things really are going great, just like they'd promised back in November. Sure, shutting down DHS might hurt a little -- you know, because national security and all -- but that's a small price to pay in order to teach the president a lesson.

So how's that going for the Republican Party? Oh, just swimmingly:

In excellent news for Serious Pundit Ron Fournier, perpetual champion of "bipartisanship" -- where "bipartisanship" means Obama does what Republicans tell him to -- 13 percent say Both Sides Do It and would blame the GOP and Obama, yay, bipartisanship!

Last week, Crybaby of the House John Boehner was saying cusses about how it is really Senate Democrats' fault for refusing to go along with the Republican plan to humiliate president Obama, and he demanded, like a serious governing grown-up would, that they "get off their ass and do something, other than to vote 'No.'"

Democrats in response said, "LOL, John, have another drink and try repealing Obamacare some more, you dolt." (Not a direct quote, but we imagine it's more or less accurate.)

Then Republicans said, "Screw this, governing is hard, we're going home!" and went on vacation, because when it comes to funding homeland security, really, what's the rush? And yes, that is accurate.

So after all these years of Republicans insisting they are the only ones who care about national security, and Democrats are a bunch of cut-and-run wussies who want to follow dumb war rules and not rape prisoners with food -- because it works on a teevee show, ergo, it works in real life -- it turns out Republicans aren't so concerned about funding the department in charge of doing that security thing. Not Republicans in Congress, and not Republicans out there in Real America either.

The CNN poll found that while the majority of Americans think shutting down that department, even for just a few days, would be a tad problematic, Republicans are a lot more likely to say, "Eh, whatever, it's not that big a deal, it's only homeland security, SHRUG." Less than half -- 46 percent -- of Republicans think it's a problem, compared with the 66 percent of Democrats who are all, "Um, yeah, can we please not do that?!?"

We're sure it will all get worked out eventually, once Congress is refreshed from yet another vacation, and somehow the parties will be able to agree that we should probably keep the lights on and the fax machines plugged in at the Department of Homeland Security, regardless of whether the jerk president wants to help undocumented immigrants, because playing politics with national security is not such a good idea after all. But just in case they can't do that, it's nice to know that even idiot Americans who believed, in November, that it was a smart thing to put Republicans in charge so they could repeal Obamacare some more, know that if The Terrorists win after all, it's the Republicans' fault.