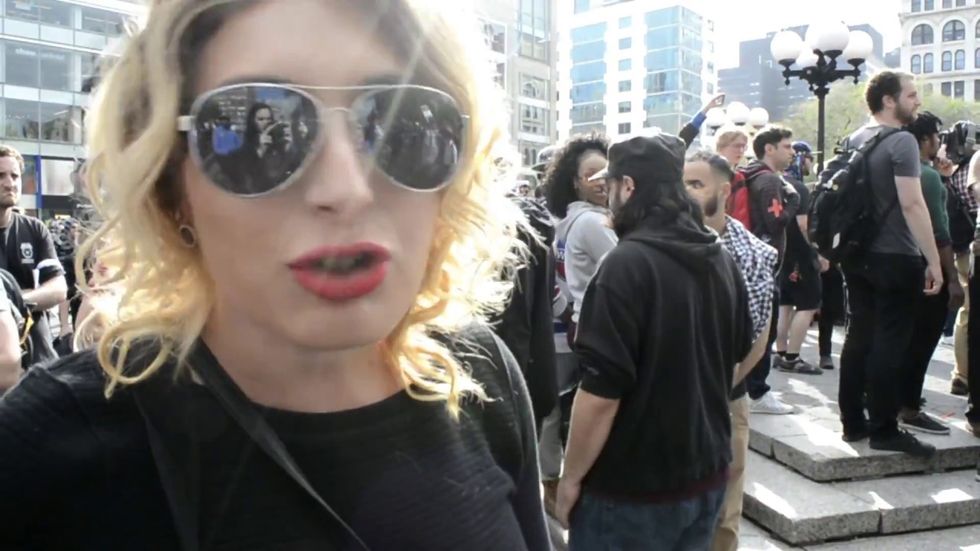 Laura Loomer, the far-right "citizen journalist" whom you may know from that time she yelled at Shakespeare for trying to murder Donald Trump and Steve Scalise, was in Manhattan yesterday following the terrorist car crash incident. Mostly she was there to do the real important journalism the mainstream media WON'T do, like taking pictures of random women in hijabs and demanding to know why they were allowed to walk around "aimlessly" on the street.

Then, she decided to do some hard-hitting investigative journalism into why there is not a rideshare app that discriminates against drivers based on their religion, which is for sure a thing it would be legal to do here, in America.

She then blamed Uber and Lyft for her being late to an NYPD press conference, on account of the fact that she couldn't find a non-Muslim driver. Probably because religion is not actually listed on driver profiles.

As a result, Uber and Lyft decided to ban her from using their apps, on account of the fact that their drivers don't need that shit. Which means that she's either gonna have to get her own ride, start taking public transportation, or perhaps get herself a couture bindle and start hopping trains if she wants to get around.

AND NOW SHE IS GOING TO SUE! Which will be very difficult because that is not actually a thing you can sue over.

Uber and Lyft are responsible for protecting their drivers. Someone like Laura Loomer puts those drivers in danger. Therefore, they have every reason to ban her from using the app. Duh. And besides, they can't very well make her a special Laura Loomer Muslim-Free Uber or Lyft App without facing legitimate discrimination charges, so why would she want to use them anyway?

Additionally, the way the Uber and Lyft business model works is that the apps themselves are facilitators of rides between people with cars and people who need rides. Drivers don't have to pick up anyone.

Still, some guy who is not a lawyer, but rather some kind of professional Mike Cernovich fan, has her back, and would totally represent her in her lawsuit if he were a lawyer, which he is not. AND HE'D DO IT FOR FREE.

That is quite an offer! Too bad businesses are definitely allowed to not serve you if you are an asshole. It's like the old sign "No shirt, no shoes, no common human decency, NO SERVICE."

Loomer is far from the first right wing "activist" to find themselves banned from using rideshare apps. Tim “Baked Alaska” Gionet, Matthew “Millennial Matt” Colligan, and James Allsup were all banned from using Uber after getting into a fight with a driver over saying some racist bullshit during the drive. Whoops! Can't take these people anywhere! Literally!

But hey. If this whole "citizen journalist" thing doesn't work out, perhaps Laura can start her own rideshare app for bigots? Like Gab but for people too repulsive for anyone else to want to be in a car with.

Ass, grass or gas nobody rides for free. Pay the lady.