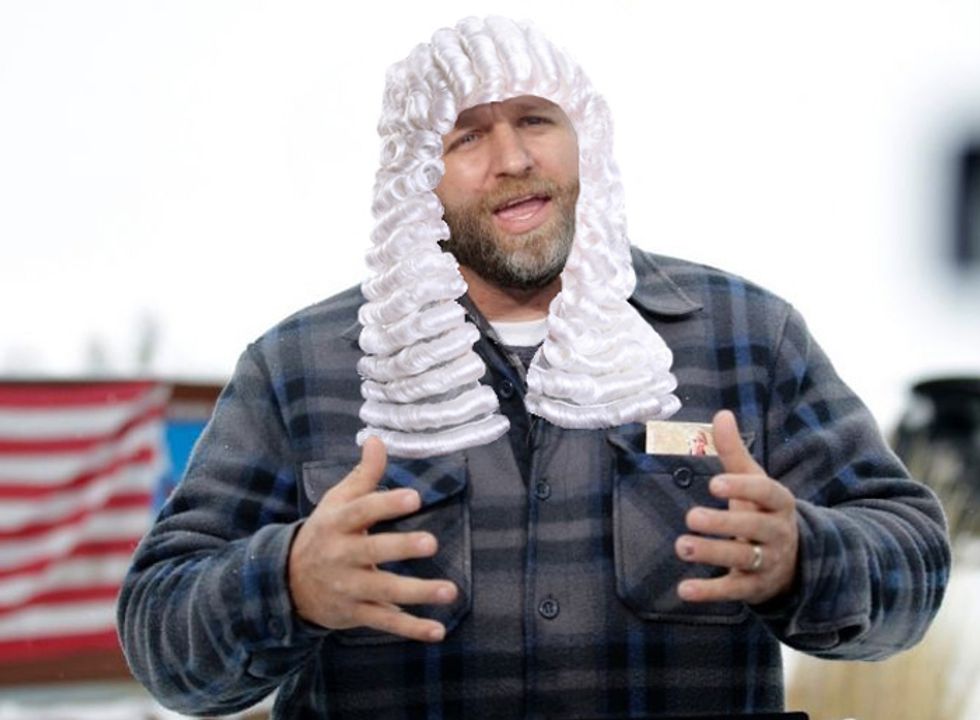 Oh goody, it looks like the defense team for malodorous wildlife refuge terrorist Ammon Bundy is taking its cues from the squirrelly legal theories of the defendant, which should make the coming trial no end of laughs, especially when the contempt citations start flying like penalty flags at an Oakland Raiders game. Bundy's attorney, Lissa Casey, filed a motion Friday arguing that the federal government has no authority to try Bundy for any of the "crimes" he's charged with in taking over the Malheur Federal Wildlife Refuge, since the federal government has no constitutional authority to own land in the first place. It's a very special kind of stupid that is much beloved of the Bunditarians, as Yr Wonkette pointed out in our very first post about the Malheur takeover.

In an incredibly stupid online manifesto posted a month before the occupation of the Malheur Refuge, the Bundys argued that the federal government can only own land when it is a territory, but not after the land becomes a state, because of sovereign citizen word magic, even though the portion of the Constitution they cite, Article IV Sec. 3, actually says "The Congress shall have Power to dispose of and make all needful Rules and Regulations respecting the Territory or other Property belonging to the United States" [emphasis added]. You might think that last clause might matter, but it's probably not relevant, since the word "territory" comes first, no tagbacks.

The Oregonian summarizes the defense motion's logic, such as it is:

Similar arguments have been made by other defendants in federal court in the past, without much success. Most recently, a Bundy co-defendant Kenneth Medenbach attempted to make that same argument in U.S. District Court in Eugene, but federal Judge Michael J. McShane dismissed it as lacking merit.

[wonkbar]href http://wonkette.com/597936/oregon-militia-idiot-steals-gubmint-truck-for-vital-snack-run-goes-directly-to-jail[/wonkbar]Medenbach, you'll recall, is the nice fellow who was arrested before the rest of the Moron Militia when he drove a stolen U.S. Fish & Wildlife Service truck into Burns, Oregon, for a beer run -- with its door sticker carefully removed and replaced by one proclaiming it the property of the “Harney County Resource Center,” the new name the wackadoos gave the place after they took it over. He seemed awfully put out about getting arrested, even though he had a warrant out for him in the 2015 case he just lost.

Medenbach's case offers a useful preview of how well Bundy's motion is likely to be received. In 2015, he was arrested for illegal camping on federal land in Josephine County, in southern Oregon. He'd set up a cabin along a Bureau of Land Management road and declared it his "homestead," arguing in court that the federal government has no jurisdiction over public land, because he thinks the Constitution says so, and so therefore the "federal judicial department" had no authority to prosecute him. Judge McShane tossed that argument before the case went to trial, even though Medenbach really, really sincerely believed it. Medenbach acted as his own attorney, and a jury found him guilty; he faces up to a year in prison and a $1,000 fine on the illegal camping conviction. Undeterred, he's also planning on acting as his own attorney in the Malheur case.

Ms. Casey's motion on behalf of Ammon Bundy contains a similar spew of constitutional argle-bargle, asking for more time to argue for dismissal of all charges against him on grounds of lack of jurisdiction:

Since the charges against Bundy include "conspiring to impede federal officers at the refuge through intimidation, threats or force" and "possession of firearms or dangerous weapons in a federal facility," he simply needs to prove the federal government doesn't really own the wildlife refuge. Then he couldn't possibly have been committing crimes on federal property or against federal workers. It's a pretty smart strategy, akin to shouting "NANANANANA YOU'RE NOT REALLY THERE" only pointing at the Constitution while doing it.

As The Oregonian notes, the Supreme Court has actually ruled specifically on the federal government's right to own the Malheur Refuge, in a 1935 decision which held the federal government owned the refuge, all of it, and had never deeded away the property as Casey's motion alleges. Obviously, say the Bundy crowd, the Supreme Court was wrong, and so they need time to prove it. Casey argues that

the land that is now the Malheur National Wildlife Refuge was not always 'federal land.' The federal government relinquished that land when it was previously deeded and homesteaded, thus relinquishing jurisdiction. It was mainly through property acquisition from the original deed holders that created this vast area now considered the wildlife refuge.

[wonkbar]href http://wonkette.com/600722/bundy-gang-get-their-day-in-court-as-if-courts-have-any-jurisdiction-on-bundy-gang[/wonkbar]To lay the groundwork for an endless series of appeals, the motion asks for additional time to gather documents and witnesses to prove the federal government doesn't really own the wildlife refuge. Monday, U.S. District Judge Anna J. Brown denied the motion and gave Bundy's attorneys until Wednesday to get their evidence together. Bundy has been returned to Oregon after his amusing courtroom antics in Nevada in a separate case stemming from his participation in the Great Big Bundy Liberty Jamboree and Armed Standoff of 2014.

Yr Wonkette has a feeling we'll be hearing more interesting legal theories from the Bundys as the corrupt federal courts continue to pretend they have jurisdiction over these Free Patriots. We can hardly wait until they get to the part about how county sheriffs are the only law enforcement officers with any legal authority.