And Lo, Unto Us A Special Prosecutor Has Been Given 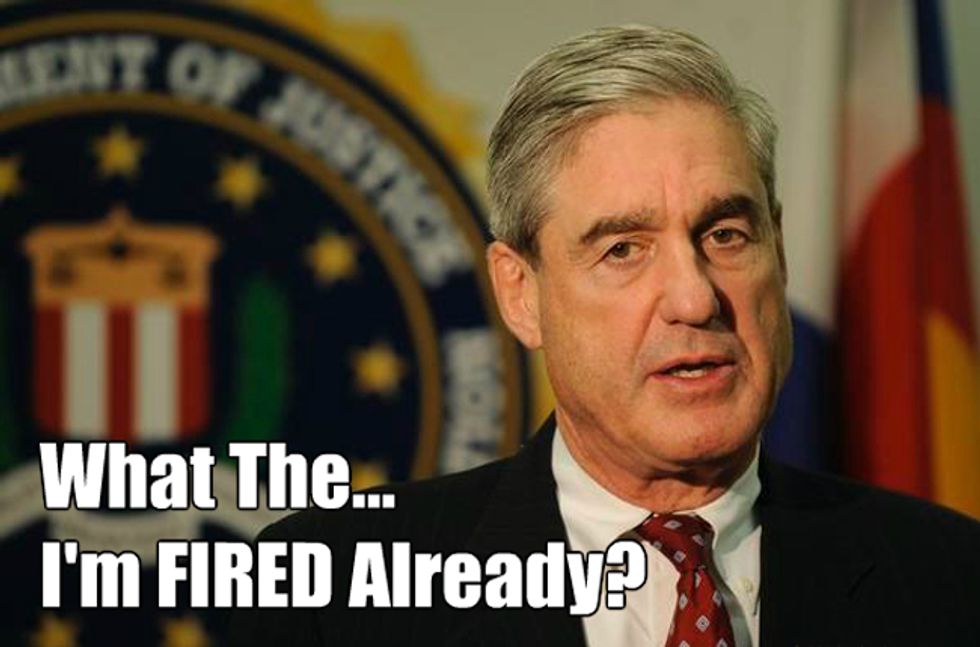 We're just getting our graphics ready in advance

Rosenstein issued a statement saying the appointment of Mueller was "not a finding that crimes have been committed or that any prosecution is warranted." Rather, he explained, a bit vaguely,

What I have determined is that based upon the unique circumstances the public interest requires me to place this investigation under the authority of a person who exercises a degree of independence from the normal chain of command.

A statement put out in Trump's name -- sure, this sounds exactly like his voice -- said

[A] thorough investigation will confirm what we already know — there was no collusion between my campaign and any foreign entity. I look forward to this matter concluding quickly. In the meantime, I will never stop fighting for the people and the issues that matter most to the future of our country.

The news of Mueller's appointment was only sent to the White House 30 minutes prior to the public announcement; after being informed of the news, Trump called his top staff to the Oval Office to draft the statement. The Washington Post got a nice atmospheric leak from a "senior White House official" who said Trump's reaction was "unbelievably calm and measured.”

“I expected him to be ranting and raving, but he was like, ‘Fine, let them do what they have to do, but we’ll be focused on our agenda,'" said this official, who spoke on the condition of anonymity to describe the private talks.

We'll just assume the raving and breaking things came after Trump found out someone (we are guessing Trump!) at the Oval Office meeting had already leaked to the Post. By this morning, Trump had found his phone and was back in Pouting Victim mode (expect the first one to be deleted and replaced, with "councel" corrected at some point, probably).

Rod Rosenstein will brief the Senate today on the decision to appoint a special counsel, and presumably to tell senators that the whole memo about how James Comey was fired for being mean to Hillary Clinton was just a prank that got out of hand.

Donald Trump seems to be the only person surprised to learn James Comey kept notes on their conversations.

As it happens, Yr Wonkette just mentioned Mueller yesterday as part of our look back at that time James Comey and pretty much the entire Justice Department told George W. Bush to take his warrantless wire tapps and put them where the sun shone a little more than where they were, which was deep in the NSA. Back in 2004, James Comey, then the Deputy Attorney General, was actually the boss of Mueller, the head of the FBI, and the two of them thwarted an attempt by Bush's White House Counsel (with an s), Alberto Gonzales, to sneakily get AG John Ashcroft to reauthorize the wiretap program while he was recovering from surgery and barely conscious. So there's the kind of guy who'll now be running the Trump-Russia investigation: a highly respected law-n-order man who's not willing to take any guff from a president who wants to play outside the rules. For a nice longread on the working relationship between Comey and Mueller, including a detailed look at the Ashcroft/Gonzales hospital showdown, see this 2013 Washingtonian profile of the two.

And finally, there's the big question: Can Donald Trump just get pissy in two weeks and fire Special Counsel Mueller? He can't go straight to Mueller and tell him he's fired, but he can tell D.A.G. Rosenstein he wants Mueller fired, and then Rosenstein can either comply and ruin his reputation forever, or refuse and get fired himself, after which Trump would have to take the Saturday Night Massacre approach, moving through (and possibly firing) others in the DOJ chain of command until someone agrees to rid him of the turbulent prosecutor. The rules governing special counsels are designed to limit presidential interference, and if Trump went ahead and tried to pull the plug on Mueller, you'd expect that to be the last straw before impeachment, but Donald Trump does seem to have that protective coating of Teflon over titanium, so who knows? Norms don't apply to Donald Trump.

And now it's time to sit back and wait for Trump to accuse Mueller, a nominal Republican but according to all sources, professionally apolitical, of being one more cog in the mean old Democratic machine that's out to get him. We weren't terribly worried that "unbelievably calm and measured" act would last more than a few hours.

Yr Wonkette is supported by reader contributions! As your attorney, I advise you to click the "Donate" clicky below.