And Now, A Timely Reminder That Jared Kushner Is A Goddamn Moron 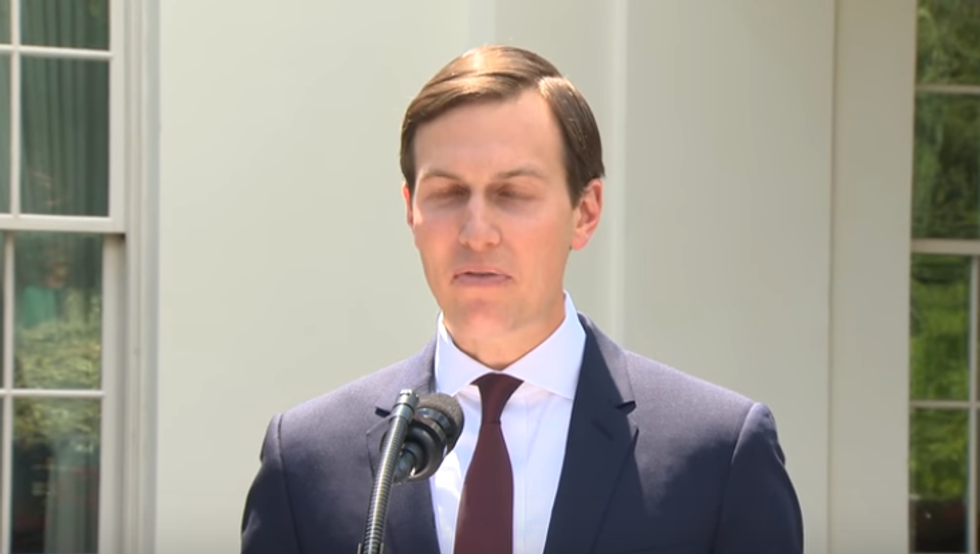 This story should not be brand new to Wonkette readers, as we wrote about it last year, when we first learned about that time Jared 'n' Ivanka, early in the Trump administration, met with Cecile Richards, the head of Planned Parenthood, and suggested they could be the progressive shining light deal-makers to "save" Planned Parenthood, if only they could convince the organization to stop doing That Little Thing It Does AKA Dirty Stinky Abortion. In that telling of the story, Javanka was going to stand between Planned Parenthood and a GOP Congress trying to defund it, and it was Ivanka's surrogates who reached out to Planned Parenthood like "Hey, we thought of this one weird trick!"

But now we have a few more details, because Cecile Richards, who is retiring from Planned Parenthood, has written a book called Make Trouble: Standing Up, Speaking Out, and Finding the Courage to Lead, and in it, she talks about what really went down when she met Trump's idiot daughter and Trump's idiot daughter's idiot husband.

According to People magazine, Richards writes that when she found out Vanky was bringing Dipshit along to their meeting, she "begged" her own husband Kirk Adams to come, because at least she would have a "witness" to whatever went down. And oh lord, shit did go down:

... Kushner told her Planned Parenthood “had made a big mistake by becoming ‘political.’"

That's right, Planned Parenthood made the choice to become "political," when it started a campaign 50 years ago begging Republicans to try to defund it every five seconds, and also asking anti-choice protesters to block its doorways and harass its patients, and maybe occasionally bomb a clinic or three. It's just more fun when things are political! Or maybe it's the other way around and motherfucking god-bothering misogynistic Republicans -- and a few asswad Democrats too! -- have made it their life's mission to deny women (and LGBT folks, and really just whomever) the affordable healthcare they need, including reproductive healthcare, WHICH VERY MUCH YES includes the 3% of Planned Parenthood's very many services that start with an "A" and end with a "bortion."

Also, do we merely like how Jared Kushner is mansplaining Cecile Richards where Planned Parenthood went wrong, or do we love it with all our hearts?

“The main issue, he explained, was abortion,” Richards writes. “If Planned Parenthood wanted to keep our federal funding, we would have to stop providing abortions. He described his ideal outcome: a national headline reading ‘Planned Parenthood Discontinues Abortion Services.'”

Undeterred, Jared Kushner was apparently totally convinced he could do this deal, the same way he has now solved the Middle East and opioids, so he told Richards to "move fast" on quitting all the 'bortions. Strangely, Richards did not feel like moving fast!

“If it wasn’t crystal clear before, it was now. Jared and Ivanka were there for one reason: to deliver a political win,” she writes. “In their eyes, if they could stop Planned Parenthood from providing abortions, it would confirm their reputation as savvy dealmakers. It was surreal, essentially being asked to barter away women’s rights for more money. It takes a lot to get [Richards's husband Kirk Adams] mad, but it looked like his head was about to explode.”

Bet he would've gotten REAL mad if Jared had asked Planned Parenthood for a bail-out loan for the Kushner Companies. (Wait, did Jared do that? Richards doesn't say. He might have done that, but she was too embarrassed for him to put it in the book? It would be irresponsible not to start a rumor that he did that.)

Point of this post is go buy Cecile Richards's book, because it sounds like a hell of a read, and also Jared Kushner is a total dipshit, and so is his wife, in conclusion and in summary, THE END.