And Then Barack Obama Released His Birth Certificate 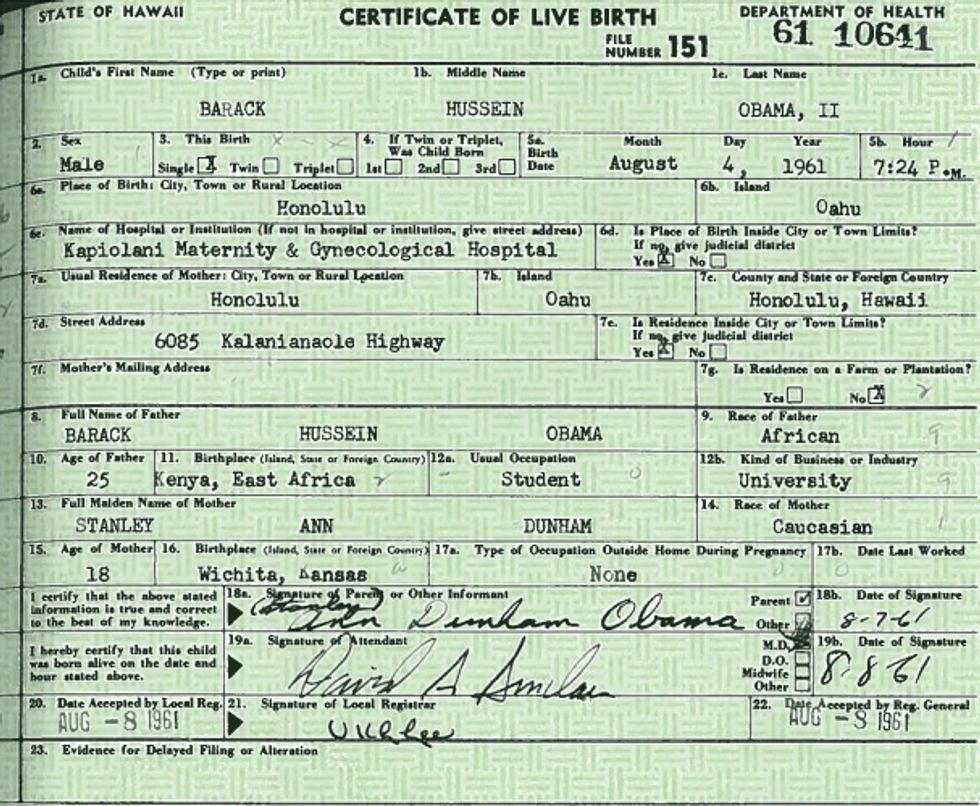 The White House gathered the press this morning as usual and just passed out the president's birth certificate. And then that was it. It's here. The full thing. Long-form. Signed by the doctor. Etc. President Obama finally just asked Hawaii for the thing, and Hawaii finally just gave it to him. According to the document, no twin or triplet was born. The mother had no occupation. Her residence was not a farm or plantation. Here it is. The president of the United States has given into the trolls. What do you even say at a moment like this? "The President’s hope is that with this step, we can move on to debating the bigger issues that matter to the American people and the future of the country." He's right: issues like, why did it take three whole days for his mother to sign the birth certificate? What are these strange "x" marks and penciled-in numbers everywhere? And why did it take somebody so powerful so long to buy a fake long-form birth certificate?

From the official release:

The President believed the distraction over his birth certificate wasn’t good for the country. It may have been good politics and good TV, but it was bad for the American people and distracting from the many challenges we face as a country. Therefore, the President directed his counsel to review the legal authority for seeking access to the long form certificate and to request on that basis that the Hawaii State Department of Health make an exception to release a copy of his long form birth certificate. They granted that exception in part because of the tremendous volume of requests they had been getting.

The document looks pretty much exactly like this long-form Hawaiian birth certificate from the era that was put up on WorldNetDaily just weeks ago to show everyone what they were after. And now they have it. (Or, more accurately, WND finally gave the White House a template document to pull off THE GREATEST CRIME IN AMERICAN HISTORY.)

So, Donald Trump? Will he hold a press conference and just melt? Or does he press on like a true patriot, demanding to see Obama's hospital band, which, oh, he removed it from his wrist some time between 1961 and now, how convenient.