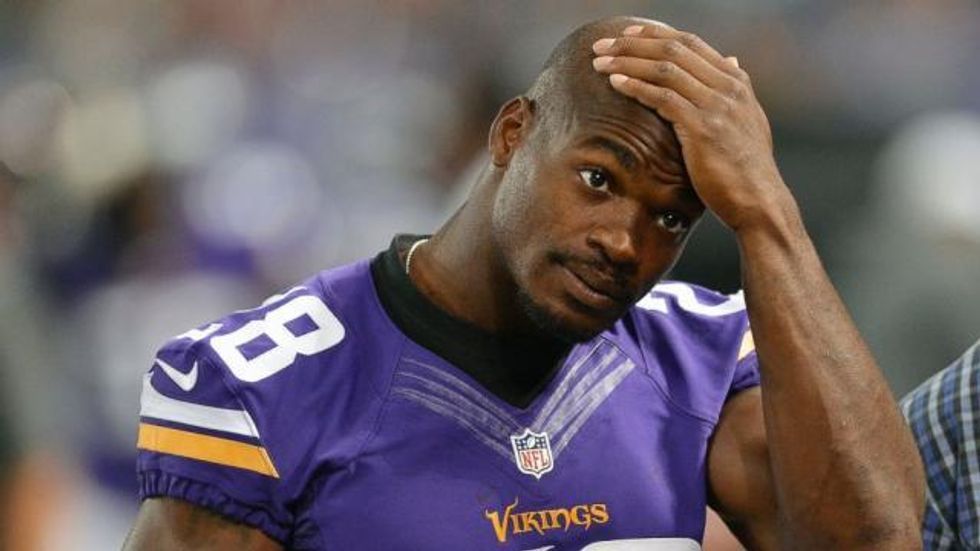 For a guy who "never intended to harm his son and deeply regrets the unintentional injury," Minnesota Vikings sportsball player guy Adrian Peterson sure has some poor dumb unintentional luck. It seems beating up his various four-year-old sons and causing serious injury somehow just keeps happening to poor unfortunate Peterson.

According to a report by KHOU in Houston, Texas, police investigated an incident in June 2013 in which Peterson was disciplining his son -- a different son, not the one he recently beat the crap out of with a tree branch -- when, oops!, the kid happened to somehow injure himself.

Earlier Monday, a top law enforcement official confirmed knowledge of the allegations by the mother of Peterson's son back in June 2013. Photos, which the KHOU I-Team obtained from a source, show a head wound to a boy identified as Peterson's four year old son. It is a wound that weeks later, left a scar above his right eye.

Police never filed charges against Peterson, though, because according TMZ's super secret source who was "close to the investigation," Peterson did not directly cause the permanent injury to his son, but rather, "the child accidentally hit his head on a carseat while Adrian was punishing him." Well, that sure makes it so much better, doesn't it? Dumb four-year-old should have just taken his punishment like a man, if he didn't want to end up with a permanent scar.

Seriously. That's what Peterson said at the time, according to text exchanges obtained by KHOU.

Mother : "What happened to his head?

Peterson: "Hit his head on the Carseat".

Mother "How does this happen, he got a whoopin in the car"

Peterson: "I felt so bad. But he did it his self."

The text messages go on to show Peterson saying he was disciplining his son for cussing to a sibling. Also in the text messages, the mother asks "What did you hit him with?"

Peterson never answers directly but writes "be still n (and) take ya (your) whopping, he would have saved the scare (scar)."

Apparently, the punishment Peterson doled out to his son is perfectly legal in Texas because Texas, which is why Peterson was never indicted for that accidental permanent injury for which he "felt so bad." You know, about his child doing it to himself. Kids, right?

Later in the text exchange, the mother wrote, "I'm real sensitive about my baby and him being hit." Which is crazy, of course, since Peterson had already explained that it was an accident that his son was injured when Peterson "gave him a whopping." Good thing Peterson set the ridiculously hysterical paranoid mother straight:

Peterson: "You tripping if you want him, come get him. I'm not about to be getting questioned down like you (you're) CPS."

Does Peterson's attorney, Rusty Hardin, have a perfectly reasonable response to this incident too? Of course he does!

The allegation of another investigation into Adrian Peterson is simply not true. This is not a new allegation, it's one that is unsubstantiated and was shopped around to authorities in two states over a year ago and nothing came of it. An adult witness adamantly insists Adrian did nothing inappropriate with his son. There is no ongoing or new investigation.

So ... the allegation of an investigation is not true, except that the authorities investigated it enough to determine his scumbag client "did nothing inappropriate." Okay, then.

Good thing the Minnesota Vikings owners had a complete change of heart about whether to let "due process" take its course and suspended Peterson indefinitely on Wednesday, or defending Peterson -- who admitted to injuring his child in 2013, even if the authorities had no problem with it -- could start to get very awkward.