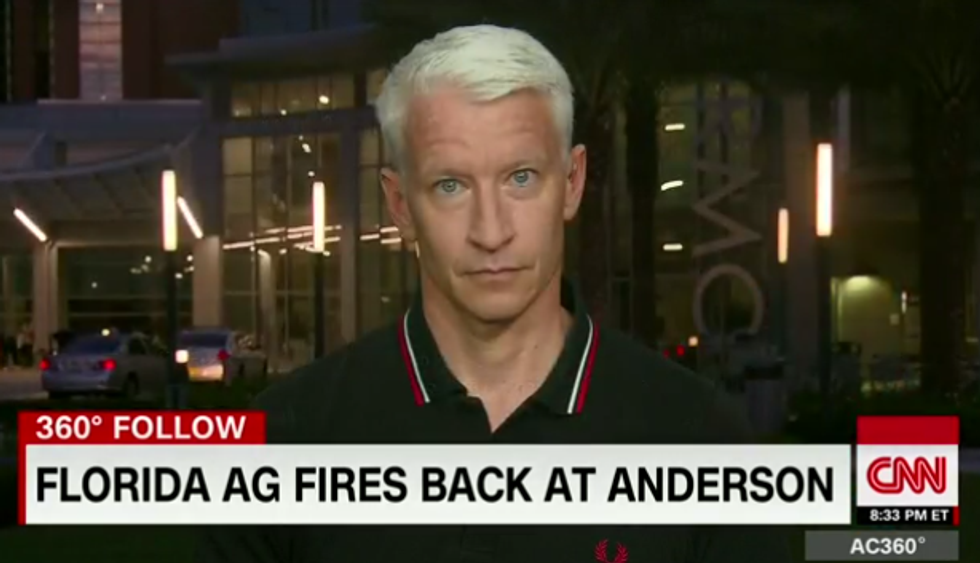 girl he is going to eat you alive

We have a very important update on the escalating catfight between hero journalist Anderson Cooper, a gay, and Florida Attorney General Pam Bondi, who has spent much of her professional career fighting against LGBT equality, but who, in the wake of 49 people murdered at a gay club in Orlando, wants us to believe she's ALWAYS been a friend of the Friends of Dorothy. Like, you guys, it is so unfair how Anderson Cooper and all of the internet is saying, "Fuck that bigot." Pam Bondi is flipping her hair this way and that, asking why everybody gotta be so mean? You guys! You guys?

[wonkbar]<a href="http://wonkette.com/602974/anderson-cooper-tells-florida-attorney-general-pam-bondi-to-sit-her-ass-down"></a>[/wonkbar]Bondi responded to the hilariously bad interview she gave to Cooper earlier this week, saying that for him to actually ask her questions about her anti-gay record, right in the middle of her crocodile tear meltdown, "encourage[d] anger and hate." How can Pam Bondi do her very important job of suddenly giving a fuck about LGBT people if that fine-ass gay CNN man is encouraging everybody to "anger" and "hate" in her general direction? Also, she complains that he edited the really good parts out of their interview. WHINE!

Anderson, honey, are you listening to this shit? Oh, haha, yes he is. He explained Wednesday that all of Bondi's #sads about how she was booked specifically to talk about scam donation funds for Orlando victims, and how he was a mean journalist to her, were poppycock, and he told viewers why he asked her all the rude questions about how she has a history of being a gi-normous bigot:

Today, the attorney general went on a radio show and made some claims about our interview that are just factually incorrect. Now, she's either mistaken, or she's not telling the truth. [...]

I chose to ask her about comments she herself publicly has made on numerous other television show appearances in just the last few days ... comments which seemed contrary to her record in dealing with gays and lesbians in this state.

And what about all those amazing parts of the interview that Anderson personally cut out with his big gay scissors?

The interview aired live and unedited in the 2 PM hour yesterday on CNN.

Let's be real here. Ms. Bondi's big complaint seems to be that I asked in the first place, in the wake of a massacre that targeted gay and lesbians, about her new statements about the gay community, and about her old ones. [...]

But what I think doesn't matter. It's my job to hold people accountable. And if on Sunday a politician is talking about love and embracing quote "our LGBT community," I don't think it's unfair to look at their record and see if they have actually ever spoken that way publicly before. [...]

The fact is, Attorney General Bondi signed off on a 2014 federal court brief that claimed married gay people would quote "impose significant public harm." Harm. She spent hundreds of thousands in taxpayer money -- gay and straight taxpayers' money -- trying to keep gays and lesbians from getting the right to marry. [...]

Ms. Bondi is championing ... her efforts to help survivors, but the very right which allows gay spouses to bury their dead loved ones, that's a right that would not exist if Ms. Bondi had had her way. I think it's fair to ask her about that. There is an irony in that.

Agreed! Now, he adds that people should NOT be mean to her or send her shitty messages, OK? It's not necessary, because Anderson Cooper, as you can see, has already wiped the floor with Pam Bondi and stolen her lunch moneys. That is HIS JOB, and the rest of us can just go on loving each other and stuff, hooray!