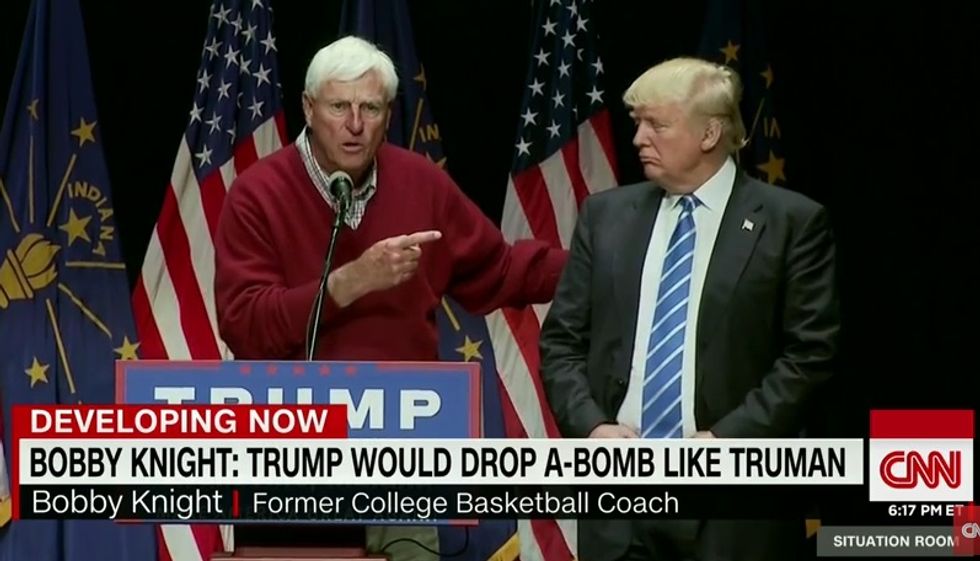 A day after Donald Trump proved his mastery of Foreign Policy, former Indiana basketball coach Bobby Knight offered his own foreign policy genius to the Trump campaign. In a speech Thursday in Evansville, Indiana, Knight introduced Trump as having the potential to be another great president like Harry Truman since he's got the guts to "drop the Bomb." It was a huge hit with the crowd, even if elitist snobs insisted on pointing out that a lot of what Knight said was a potent mix of incorrect history and pure bollocks. (And also terrifying.) Said Knight, sounding exactly like your idiot uncle who's got three "MAKE AMERICA GREAT AGAIN" hats,

And Harry Truman, with what he did in dropping and having the guts to drop the bomb in 1944 saved, saved billions of American lives. And that's what Harry Truman did. And he became one of the three great presidents of the United States. And here's a man who would do the same thing, because he's going to become one of the four great presidents of the United States.

We're pretty sure you don't need us to play "spot the errata" in that paragraph. The point isn't that Bobby Knight is kind of a moran, it's that he would like Mr. Trump to please oh please use some nukes against ISIS. While it's hardly original to Trump, it makes no sense at all, as we pointed out when idiot Arkansas state Sen. Jason Rapert had a nice wargasm fantasizing about "taking out" ISIS with one or two well-placed tactical nukes:

Can’t see how anyone could object to a few nuclear strikes in the Middle East -- it’s all just sand and camels anyway, amirite? Oh, but then stupid liberals started misrepresenting Rapert and pointing out pesky little details, like how ISIS doesn’t have just one big Death Star base that we could take out, and how some of their “strongholds” are located in “cities” with “large civilian populations.” Oh, and that a lot of the territory they control is in “Iraq,” which is one of our “allies” in the region and might object to having nuclear weapons dropped on it. Not to mention minor problems like “nuclear fallout” all over the Middle East, settling on Israel and Lebanon and Saudi Arabia and such, depending on the breaks.

Jesus, why do rightwing dorks have such a stiffy over using nuclear weapons for everything, from scattered terrorist groups to fixing leaky oil wells? It's like they all watched Disney's "Our Friend the Atom" when they were 12-year-old boys and never gave up fantasizing about all the cool stuff they could do by tossing around a few nukes.

For the little it's worth, Trump did at least reassure NBC's "Today" show Thursday he wouldn't just go around dropping the Bomb all willy-nilly. He'd have to be really, really pissed at somebody to do that:

"It's a horror to use nuclear weapons. The power of weaponry today is the single greatest problem that our world has. It's not global warming, like our president said. It's the power of weapons, in particular nuclear."

Trump continued, "I will be the last to use it. I will not be a happy trigger like some people might be."

Isn't that nice, knowing he won't be a happy trigger? Or some kind of idiot fucking?

In any case, seems like we have little choice but to end this post with a classic, Randy Newman's "Political Science":