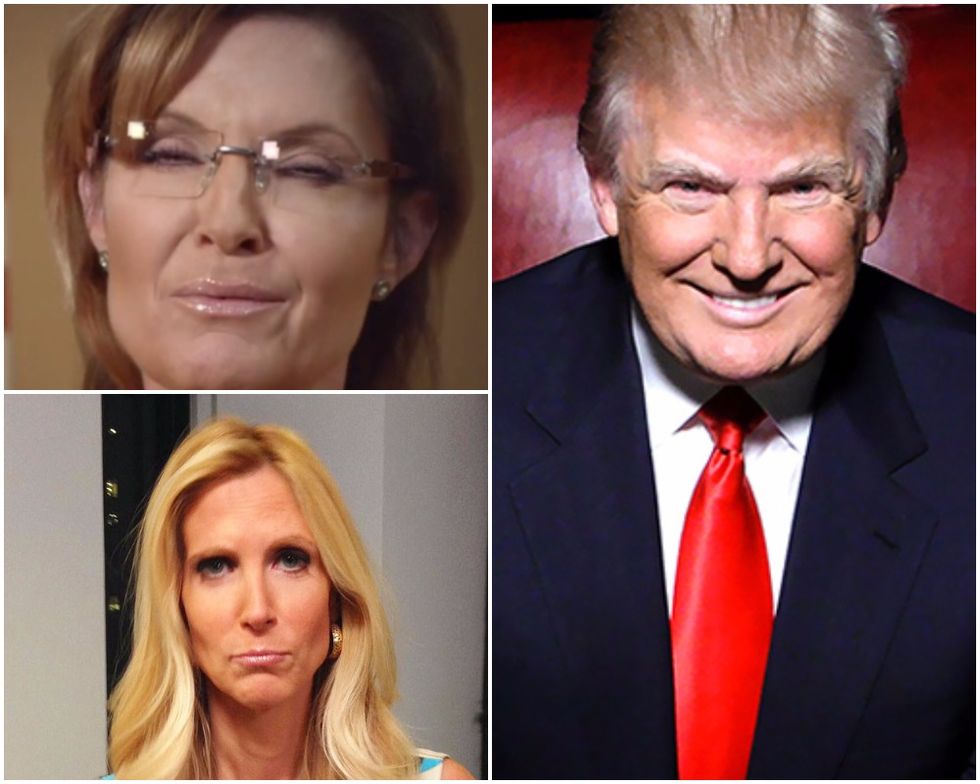 Are you riddled with ennui because you really, really believed Donald Trump was going to do every single little racist thing he said on the campaign trail? We don't know how many of them he's going to actually do, and we'll be ready to push back HARD the second he tries anything, but Ann Coulter is riddled with ennui because she's starting to think she mighta gotten conned by Trump, which makes her :(

LIFELIKE APPROXIMATION OF HUMAN TEARS! That is what Ann Coulter is doing about the article Mickey Kaus tweeted, where Mike Pence says he's going to work with Congress on immigration, all quick-like, but which also mentions how Speaker Paul Ryan has said Trump's little thing about immediately deporting 11 million people ain't gonna happen. Trump's gonna sell out! He's not going to Holocaust OR deport all the brown people, and that was literally the only thing Ann Coulter wanted for Christmas.

She was still sad on Sunday, responding to a rumor that former Utah Gov. Jon Huntsman may now be on Trump's list for secretary of State. She was also still retweeting Mickey Kaus:

WON'T SOMEBODY THINK OF THE RACIST SNOT-WAFFLE TRUMP VOTERS?

[wonkbar]<a href="http://wonkette.com/605864/ann-coulter-will-die-of-broken-heart-if-donald-trump-stops-yelling-at-mexican-rapists"></a>[/wonkbar]To be fair, Coulter telegraphed her pain and anxiety over how Trump might not do racism as hard as she likes it MONTHS AGO. You see, she had a book to sell, which was all about Trump throat-cramming America with the hate and bigotry she feels so deeply in the chest cavity where her heart is supposed to be. She was specifically worried Trump might actually "soften" on immigration, because that would be the ultimate betrayal. Did Trump not get all the "spicy stuff" about Mexican rapists from reading her books? Does he no longer love her? Is he going to trade her in for a younger model of racist white lady pundit, like maybe that Tomi Lahren chick?

[wonkbar]<a href="http://wonkette.com/608932/donald-trump-bribes-carrier-into-still-moving-some-jobs-to-mexico"></a>[/wonkbar]In other news, Sarah Palin is kinda worried, also too. On Friday, the same day she was tweetin' "HOOHAH!" because Trump's Defense secretary nominee makes her yell vagina nicknames into the sky, Palin's ghostwriter published an op-ed on the YoungConservatives website about how Trump's alleged Great Deal to keep Carrier jobs in the US and A might not have been a great deal, and sure enough kinda looks like crony capitalism, and holy shit we need our fainting couch and our smelling salts, because Palin is ... (DEEP BREATHS) ... totally right:

When government steps in arbitrarily with individual subsidies, favoring one business over others, it sets inconsistent, unfair, illogical precedent. Meanwhile, the invisible hand that best orchestrates a free people’s free enterprise system gets amputated. Then, special interests creep in and manipulate markets. Republicans oppose this, remember? Instead, we support competition on a level playing field, remember? Because we know special interest crony capitalism is one big fail. [...]

Gotta’ have faith the Trump team knows all this. And I’ll be the first to acknowledge concerns over a deal cut by leveraging taxpayer interests to make a manufacturer stay put are unfounded – once terms are made public.

She WANTS to believe in Trump. Gotta have faith! But somethin' just smells funny to Mama Grizzly's nose-face, kinda like when Todd does a big S.B.D. poot when he comes home from a long day of snow-mobilin', like EW GROSS, TODD, STOP THAT! Surely Trump knows ... come on, Donald Trump! ... Sarah ... has ... conservative ... Republican ... principles ... to ... uph-

But know that fundamentally, political intrusion using a stick or carrot to bribe or force one individual business to do what politicians insist, versus establishing policy incentivizing our ENTIRE ethical economic engine to roar back to life, isn’t the answer.

Sarah's doin' straight talk on the Straight Talk Express, but she never imagined she'd have to BEEP BEEP! the bus's horn in Donald Trump's direction.

Anyway, we are so very sorry Ann Coulter and Sarah Palin aren't doing so well right now, and we mean that with our sincere feelings. (That's a lie.) And we are very sorry if they don't get any jobs in the Trump administration now, because they opened their mouths and criticized Dear Leader. (More lies.)

We look forward to watching these two unravel completely when they figure out Trump was just using them to attain power and doesn't give one solitary moose turd about them. (And THAT'S THE TRUTH.)