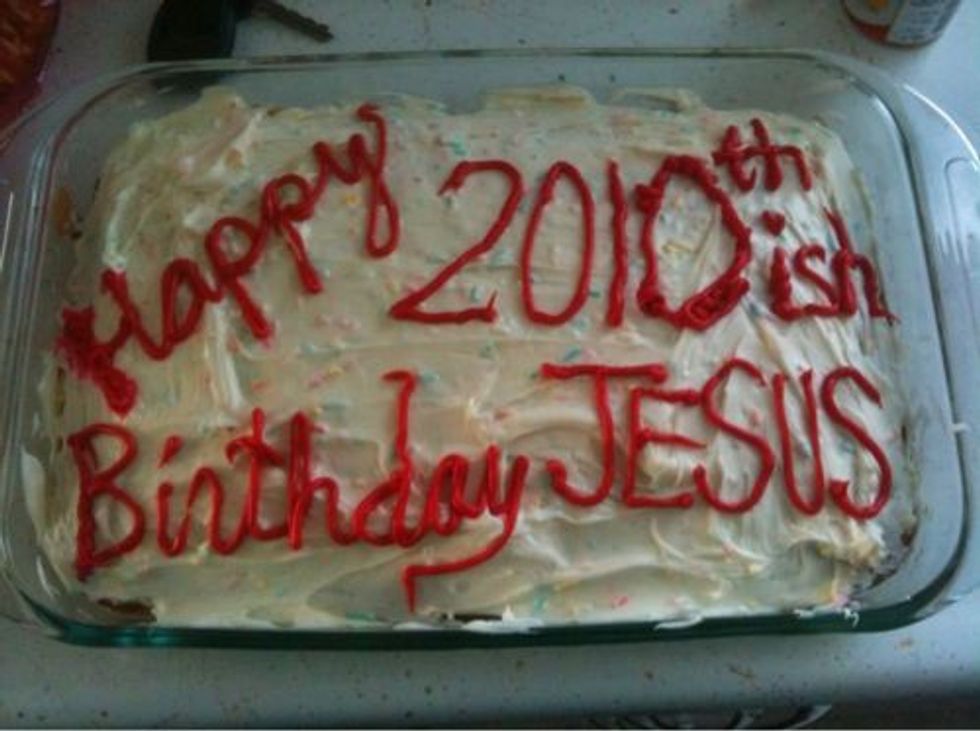 The Colorado Court of Appeals has given another homophobe cake baker the gift of martyrdom and however many virgins fundamentalist Christian assholes get when they eat dirt and die. Oh no, the judges didn't LITERALLY kill the baker, they just wrote a real mean ruling what says that Jack Phillips, owner of the Masterpiece Cakeshop in Lakewood, Colorado, did bad discrimination when he refused to put some of his world famous frosting on a gay cake, in a gay way, for a gay-marrying couple, and now he must REPENT! Indeed, all three judges on the panel agreed:

“[T]he Supreme Court [has] recognized that, in some cases, conduct cannot be divorced from status. This is so when the conduct is so closely correlated with the status that it is engaged in exclusively or predominantly by persons who have that particular status. We conclude that the act of same-sex marriage constitutes such conduct because it is ‘engaged in exclusively or predominantly’ by gays, lesbians, and bisexuals. Masterpiece’s distinction, therefore, is one without a difference. But for their sexual orientation, Craig and Mullins would not have sought to enter into a same-sex marriage, and but for their intent to do so, Masterpiece would not have denied them its services.”

Since Masterpiece admitted it refused to serve the couple because of their intention to marry, it’s reasonable to infer an intent to discriminate because of their sexual orientation. Citing an example proffered in a similar case — “[a] tax on wearing yarmulkes is a tax on Jews” — the Court found that “discrimination on the basis of one’s opposition to same-sex marriage is discrimination on the basis of sexual orientation.”

See, this was necessary to spell out, all idiot-style, because Phillips claimed that since he was willing to let homosex-Americans give him money and eat his delicious cakes, as long as they weren't going to use them to sodomy marriage each other, there's no way he can be discriminating. Au contraire, as they rarely say at whatever Christian baking camp Phillips went to for his certification. Because it tends to be gays and lesbians getting gay marriages, then ipso facto, you are discriminating against GAYS when you say "no gay marriage cakes."

This is similar to that old religious right trope, which lost forever at the Supreme Court in June, that our old marriage laws were completely fair, because all people had the same right, to marry a person of the opposite sex. Of course, Justice Anthony Kennedy so eloquently pointed out that people who say that are dumbshits, so shut up.

So, in Colorado, this isn't just happening because of the Supreme Court ruling, but also because of the Colorado Anti-Discrimination Act (CADA), which is really good and strong and also very mean to fundamentalist wombat turds who think things as boring as "laws" shouldn't apply to them. Because remember William Jack, that angry wingnut who thought he was being all clever-like when he decided to go order himself a "God Hates Fags" cake, but got smacked down under that very same law when he whined and complained about how the bakery agreed to make the cake, but wouldn't write about God smiting queers, in frosting? (They offered to provide him with the supplies to write it himself.) Wingnuts think these two situations are the same, because wingnuts are stupid, and do not understand that "God hates fags" is "speech," whereas two men getting married is "legal in the United States."

Anyway, Phillips has said in the past that if he's forced to make gay cakes, he's just gonna close up shop, rather than risk an eternity in hell for writing words in cake frosting that piss off his savior, the one who is called the Christ, but that's fine, there's always GoFundMe. Maybe that whining bigot florist in Washington State or the "Deliverance" extras who run that gay-hatin' pizza joint in Indiana can show him how to set up his very own account.