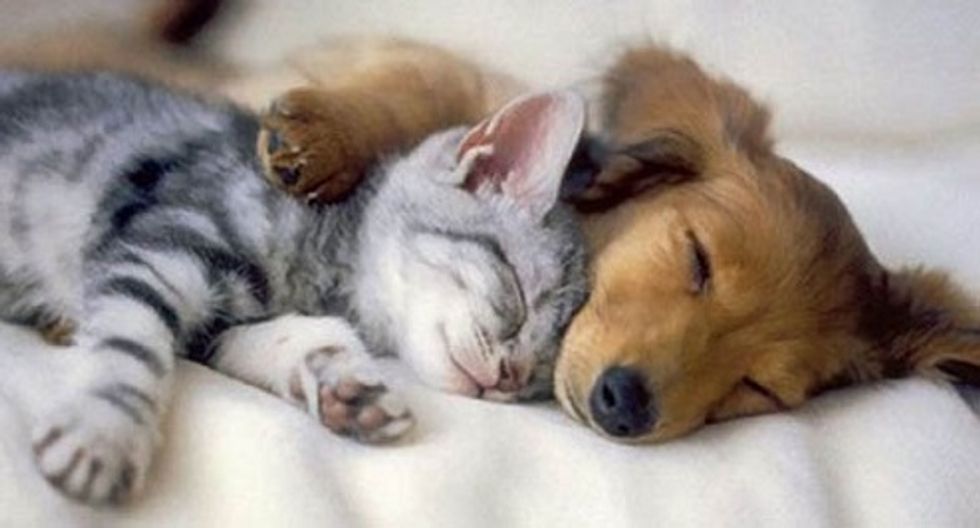 Everything else is terrible, the least we could do was find a happy pic for you.

Pope Frank was in town to basically tell Congress to get its shit together. In response, Congress is flinging poo in every direction but "together," because it is full of insolent assclowns and juvenile numbnuts. With government funding running out at midnight on Sept. 30, we'll use a metaphor that the Pope would probably frown upon: We're f'ed in the A. Let's wonksplain.

If Congresscritters actually did their jobs, they would pass 12 separate funding bills, each funding a discreet part of the gub-mint (like Defense, Transportation, HHS, etc.). But work is hard and we elected a bunch of Tea Party jagoffs with the combined IQ of week-old Santorum. So rather than pass separate bills, Congress lumps all of government spending into one bill, called an omnibus. And this time, Congress isn't even doing that!

They are arguing over a Continuing Resolution, which simply says, "We are too fucking lazy and incompetent to do one of the only goddam things the Constitution requires of us, which is to appropriate funds. That being the case, just keep spending at the same level as last year cause fuck if we know how to govern."

If the government does shut down, not every door is locked with a sign that says, "Gone Fishin." Some folks still have to work:

Air traffic controllers stay on the job to keep flights going, and federal prisons stay staffed. The meteorologists at the National Weather Service and the cyber security experts at the Department of Homeland Security come to work. Meat and poultry inspectors at the Agriculture Department stay on the job. Veterans’ hospitals stay open and Social Security checks still go out. Mail still gets delivered, since the U.S. Postal Service gets only a sliver of its funding from Congress. And the active-duty military — and many of the Defense Department civilians who support it —keeps working, at home and abroad.

But national parks will close, Head Start centers will begin to close, and this year Food Stamps will not be paid. FUCKING CHRIST, we will literally be starving people so that the tin-foil-hat wearing wing of the GOP (yes, all of them) can stomp their feet and pout about fake videos. Some members in Congress are so adamantly pro-life that they will try to kill people to prove it, because logic is apparently dead.

But we'll save money, right? All those federal workers will just sit at home and not get paid, so at least there is some good, right? WRONG!

And that's not even counting the "macroeconomic effects on economic output" and the "general state of inefficiency and domino effect on customer services of a shutdown’s three stages of planning, execution and reopening."

Republicans like to whine about "waste, fraud, and abuse" in government. Holy hell, all they need to do is look at their own actions.

Waste: The last shutdown in 2013 literally cost the government about $125 million PER DAY that the government was shut down. That money was spent on back pay for federal workers who DID. NOT. WORK. We approve of the back pay, but we are just smart enough to know that shutting down the government because you are a whiny-ass Canadian man-child who believes the lies of a heavily edited video about abortions is fucking stupid. We’re borrowing money to pay for Congress being stupid.

Fraud: Fuck that – it’s not Congress that's being stupid. It’s Republicans. The two-faced knuckle-dragging race-baiting tea party weaselfuckers promised fiscal responsibility. This is not fiscally responsible. This is reckless pandering to a constituency that is too fucking stupid to know that they’ve been had. The tea party is a fraudulent front for a bunch of frothing asshats determined to fuck up the machinery of government so long as that Kenyan Socialist Communist dude sits in the Oval Office.

Abuse: This is a clear abuse of power by Congress. You literally have ONE JOB to do every year: fund the government. Just pay your goddam bills. Keep the government open and running. A Continuing Resolution can be like 2 pages long. TWO PAGES. Instead, we the taxpayers are stuck begging China for more money so we can pay federal employees not to work, just so whackjobs can get politiboners harping about trying to deny funding for women's health care.

If this isn't enough to get liberals to vote in 2016, then we're definitely f'ed in the A.

Follow DDM on Twitter (@Wonksplainer), because he knows that the government will never be able to shut down a well-timed dick joke.