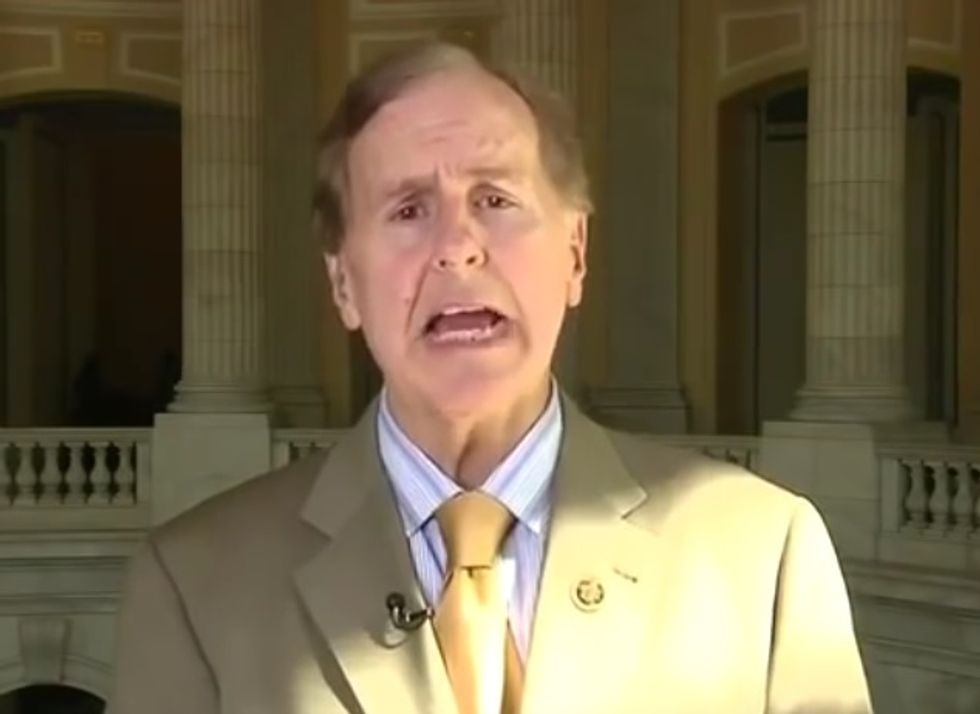 Another dispatch from the National Conversation on Race, in light of the protests in Charlotte, North Carolina, following the police shooting of Keith Lamont Scott on Tuesday. Congressidiot Robert Pittenger explained why black people get so darn angry when police gun down black people, even the ones who may have deserved it:

The grievance in their mind is the animus, the anger. They hate white people because white people are successful and they’re not. I mean, yes, it is, it is a welfare state. We have spent trillions of dollars on welfare, and we’ve put people in bondage so they can’t be all that they are capable of being.

For some reason, a lot of people didn't take too kindly to Pittenger's comments, which were really little more than standard GOP anti-Great Society talking points, but delivered without the usual varnish of euphemism. Pittenger later took to Twitter to notpologize -- not because he'd said anything inherently racist or anything, but because he was all upset over the protests in Charlotte, so he didn't word things goodly:

You will note the lack of any apology for the substance of what he said. That shit was dead on, just phrased a bit inelegantly. We imagine Pittenger -- who has endorsed Donald Trump -- was genuinely surprised anyone had a problem with his comments, since hyperbole has worked so well for him previously, like when he explained the Iran nuclear deal was worse than Hitler.

Kathy Miller claims that she never saw any of this 'racism' stuff when she was growing up in the 1960s.

Rep. Pittenger's comments followed on the insights of an Ohio county chair for the Trump campaign, who explained how Barack Obama brought racism into existence. Kathy Miller had to quit her job -- so unfair! -- simply for saying "If you’re black and you haven’t been successful in the last 50 years, it’s your own fault. You’ve had every opportunity, it was given to you."

You will be delighted to know that Ms. Miller has also notpologized following her resignation as chair for Trump's campaign in Mahoning County, issuing a statement saying,

My personal comments were inappropriate, and I apologize. I am not a spokesperson for the campaign and was not speaking on its behalf...I have resigned as the volunteer campaign chair in Mahoning County and as an elector to the electoral college to avoid any unnecessary distractions.

Inappropriate and distracting, sure. But darned if she was going to say she was wrong.