Anthony Kennedy Probably Not Retiring From SCOTUS This Week, So CALM YOUR TITS! 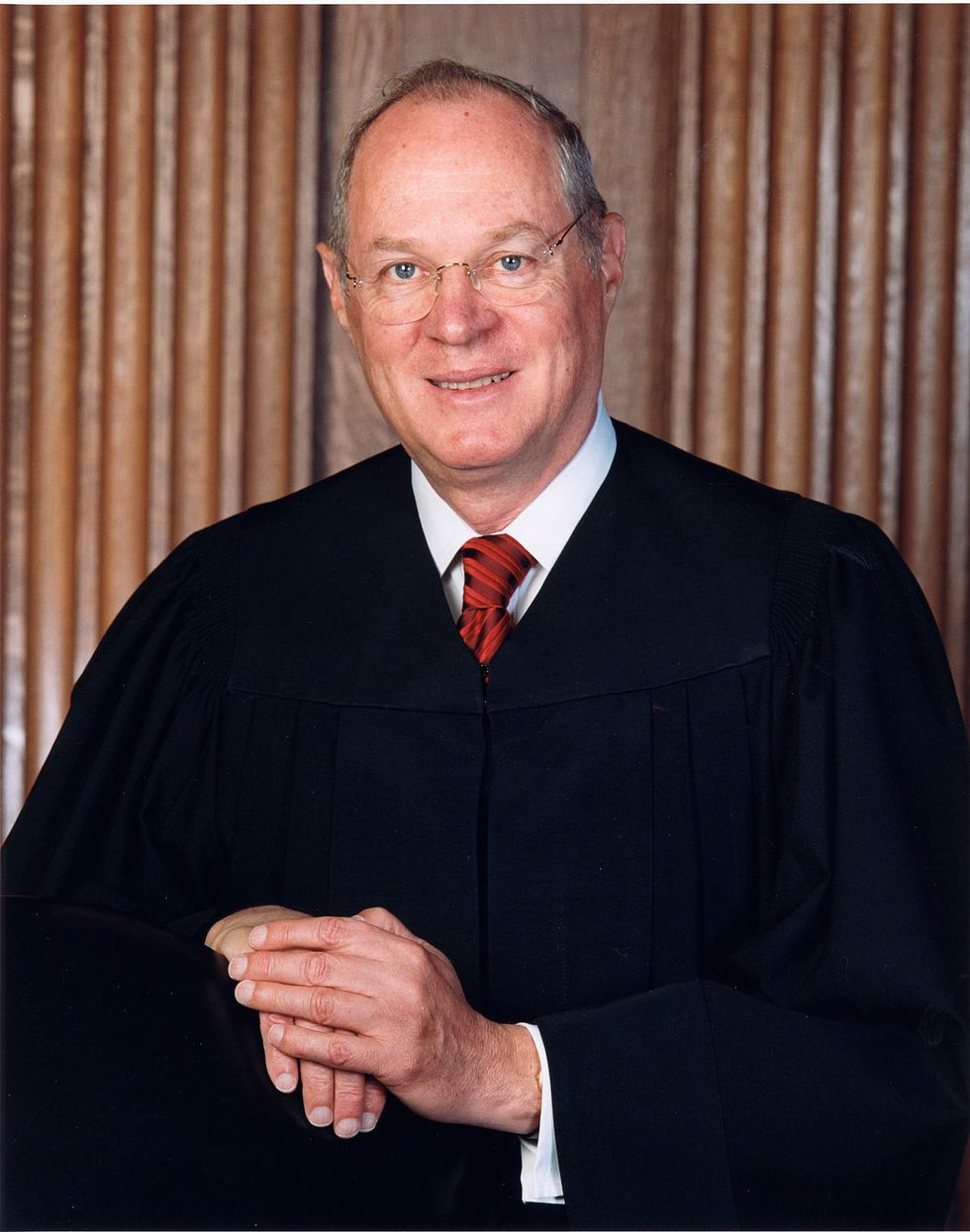 The past few days (months) there have been rumors a-flying that today or tomorrow, SCOTUS Justice Anthony Kennedy, AKA "THE SWING VOTE," might maybe announce his retirement. WHOA IF TRUE, because that would be bad, you guys. It was one thing for the Republicans to steal Merrick Garland's seat and give it to frightening wingnut Neil Gorsuch, because that just put a really scary conservative guy in the chair of another scary conservative guy, Antonin Scalia, who got pillowed to death by his own face.

But Kennedy is right there in the middle! Sometimes he is the deciding vote on "I'm DTF with the gay marriages!" and "Here are some abortions!" On the other hand, sometimes he is like "That's right, fools, corporations like Citizens United are PEOPLE!" Like we said, sometimes he is good and sometimes he is bad. But regardless, we need him in there, because if Donald Trump got to nominate his replacement, then he would probably pick the lovechild of Pat Robertson and Satan and the Supreme Court would go to hell and Roe v. Wade might go away and just PLEASE DO NOT RETIRE, 80-YEAR-OLD ANTHONY KENNEDY.

The good news is that it probably isn't going to happen. David Lat at Above the Law notes that the retirement rumors really got going several months back, based on a few readily available "clues," which were these:

... (1) moving his law clerk reunion up a year, a departure from the customary schedule of every five years; (2) not teaching in summer 2016 at McGeorge Law’s Summer Program in Salzburg, suggesting a possible slowdown for Justice and Mrs. Kennedy; and (3) hiring just one law clerk for the upcoming Term, October Term 2017.

At the time, Lat made an inquiry to the Supreme Court Public Information Office, and it got back to him saying, "Dude, he moved the reunion thing because he's 80 this year, which is #special, he's not going to Salzburg because he's busy shampooing his cat, and Jesus, he just hasn't hired all his clerks yet." You see, retired SCOTUS justices hire one clerk, whereas those currently sitting on the court hire four. And now Kennedy has hired all four of his clerks, so unless those are FALSE FLAG HIRES, to throw us all off the scent of his upcoming retirement, it sounds like he's planning on sticking around. So, hooray! (Also, oh man, that would be a dick move if he hired all those people and was all of a sudden like, "JUST KIDDING, you are fun-employed, you dumb clerks! I am going to France to dick around for the rest of my life, PEACE OUT HATERS!")

Lat notes that Kennedy has also already hired a clerk for 2018. (He seems to think it is likely that Kennedy will retire in 2018, which would be ... still ugh.)

That law clerk reunion was last night, and according to people there, Kennedy said he had a big announcement to make, which was that even after the dinner had ended, the bar would be staying open, which is just a very good announcement for a SCOTUS justice to make.

Of course, it's possible that if Kennedy retired this year or next, it wouldn't be THAT disastrous. (Except yeah kinda it would.) Chief Justice John Roberts, who used to always be a reliable conservative vote on the court, has been showing signs of wanting to become a swinger the past few years. (In the non-sexual way, you perverts!) He has really upset the wingnuts, by constantly voting to say Obamacare is awesome. Notably, also too, just today Roberts joined the majority in Pavan v. Smith, telling the Arkansas Supreme Court to get bent, as it had ruled against letting married gay couples list both spouses as parents on birth certificates. So maybe (MAYBE) in a Trump world, Roberts would be nudged even more toward the center, in order to save his reputation.

Also too, interestingly, in this year's term, the Court has ruled unanimously fully 70% of the time, which simply does. not. happen. In one case, the justices ruled unanimously that Neil Gorsuch is a big idiot, rejecting a decision he wrote in a disability case while he was testifying in his confirmation hearings. So maybe we can hold out hope that they're battening down the hatches to preserve the integrity of the judicial branch as a check against the Trump presidency?

We just don't know. But the point is that Anthony Kennedy is not retiring, unless he all of a sudden does, in which case it is OPPOSITE DAY, which means the contents of this post are 100% correct.

Wonkette is fully funded by readers like you, because we ain't got ads! If you love us, click below to fund us!