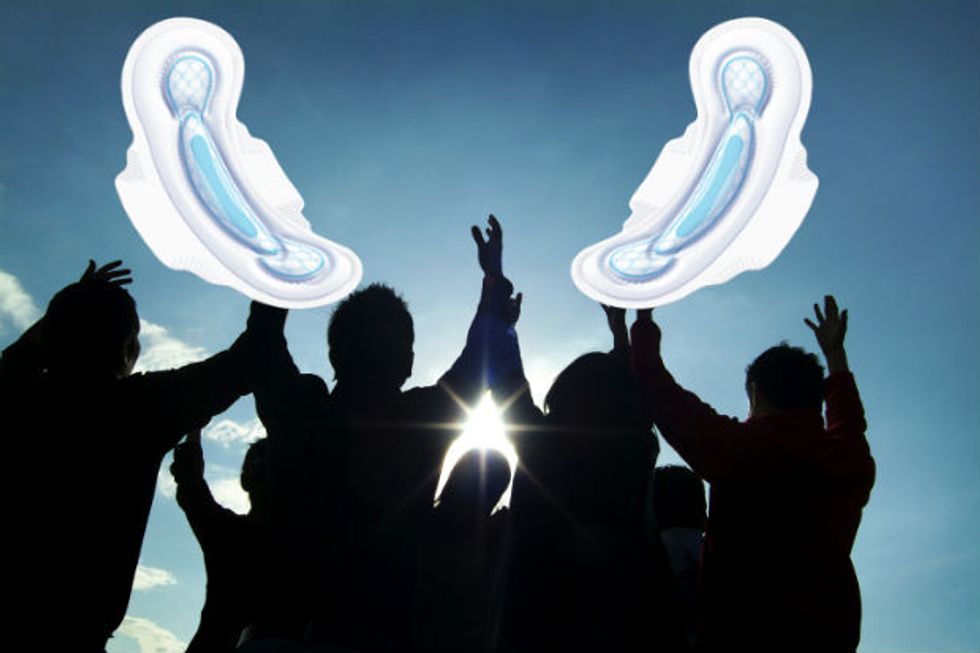 Mark your calendars! Next Tuesday, June 7, on the anniversary of Griswold v. Connecticut, Pro-life Wisconsin will be setting up prayer vigils around birth control centers across the state and praying for all the beautiful babies that did not get borned or even fertilized thanks to all the hussies out there shunning God's plan for them by taking their whore pills. Or something!

RightWingWatch reports the group sent out an email to all their friends, inviting them to participate in this most holy of occasions.

YAY! Funerals for unfertilized eggs! Why not? But how does it go? Do they say prayers like "Our menstrual fluid, which art in this Diva Cup, hallowed be thy stain, damn all the whores who think they can just have sex and not have to have a baby right to hell forever?" Is there a mass? What about a wake? Like a three-day-long Irish wake, where everyone can walk past a vat of used tampons and sob for the souls within? Or maybe make it a monthly occurrence!

You see, unlike even most "mainstream" pro-life groups, Pro-Life Wisconsin is vehemently opposed to all forms of artificial birth control. Why? Because "without the notion of 'unwanted' children that the contraceptive mentality fosters, there would be no abortion." Huh! So before the invention of the pill, literally everyone who had a baby was way excited to have that baby? Huh! GO KNOW?

Their website explains this position further by quoting one "Professor Janet Smith":

"The connection between contraception and abortion is primarily this: Contraception facilitates the kind of relationships and even the kind of attitudes and moral character that are likely to lead to abortion. The contraceptive mentality treat sexual intercourse as though it had little connection with babies; it thinks of babies as an "accident" of intercourse, as an unwelcome intrusion into a sexual relationship, as a burden. The sexual revolution has no fondness - nor room for - the connection between sexual intercourse and babies..."

How dare we go around having the sex and not be willing to pay for it by going through nine months of pregnancy and then raising a child? Without even considering that this is what Professor Janet Smith would prefer happen? Do we not even consider how happy it would make her if no one was having sex except to have babies? How she would joyously walk around all day, knowing she could look at any childless person and feel pretty secure that they had never had an orgasm? Do we think Professor Janet Smith and her personal preferences for how and why we have sex don't matter, just because we've never heard of her before in our lives? How cruel can we possibly be??

Quite honestly, I am INSPIRED by the actions of this group. Which is why I am going to look into the men involved with this, and I will be going to their houses and praying my heathen, whore-pill-guzzling heart out for all the precious sperms (AKA POTENTIAL LIVES) that they have likely callously disposed of in Kleenex tissues over the many years of their lives. I mean, let's be real here! It is pretty unlikely that these men have never jerked it even once ever, or had some kind of sexual experience which did not end in ejaculating into a vagina, even if it were on accident, and it seems as though God was way the hell more specific about not doing that than he was about hormonal birth control, which he failed to psychically predict. I mean, if MEN think that having an orgasm is some kind of "good time" that they can have without being pregnant for nine months and raising a child, then how are they gonna set a good example for us ladyfolk with our tiny ladybrains?