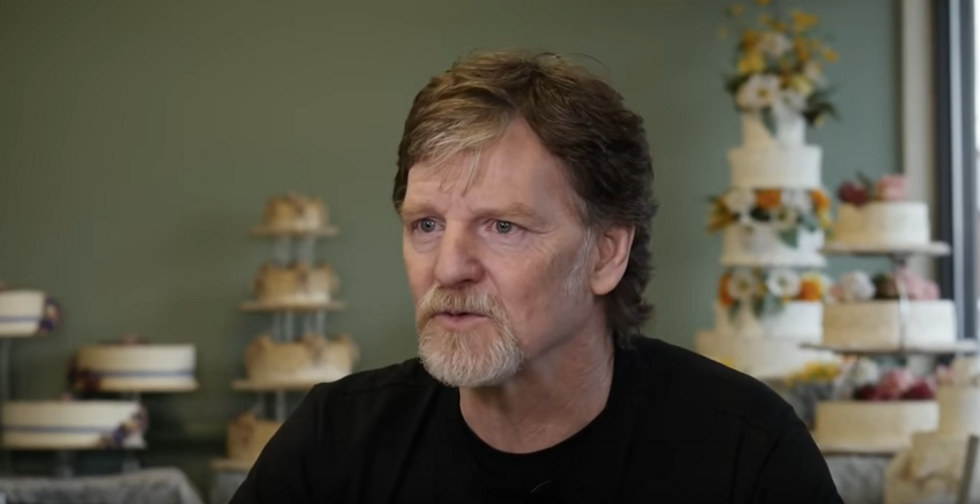 Now that the Supreme Court has heard arguments in Masterpiece Cakeshop, Ltd. v. Colorado Civil Rights Commission (the one with the Christian guy who doesn't want to bake cakes for gay weddings), it seems like everything old is new again. It's sort of like one of those episodes of the Golden Girls that was 90% flashbacks and 10% eating cheesecake, except it's not funny, no one learns any lessons, the cheesecake is made of rat poison, and all the Golden Girls have been secretly replaced with Billy Graham.

What I mean to say is, there are a heck of a lot of wingnuts out there right now ready to sell us a lot of shit we've all seen before as a brand new episode. They're cool now, you guys! They totally don't hate gay people. They just really love freedom. And strawman arguments.

This has been going on for quite some time now -- probably since the later seasons of the original Will & Grace -- but it seems that some of the people writing their bigot bakery hot takes think this is the first time we are hearing any of it, and are sure they are about to blow our very minds with their totally non-bigoted explanations for why a Christian baker should not have to bake a cake for a gay wedding, all of which are conveniently not based in any kind of reality.

If you read this morning’s column by my colleague Elura Nanos and nothing else, you might think that Phillips is a horrible bigot who refuses to sell any of his baked goods to gay people. You might also think that there’s no reason why this case should have gotten to the Supreme Court in the first place, because obviously religious people are evil and it’s impossible to hold good faith beliefs that aren’t a guise for expressing hatred.

Of course, none of this is true.

Well, some of it is. Jack Phillips is, indeed, a bigot. If he were not a bigot, this particular Supreme Court case would not even be happening, because he would have just made the damn cake like he would have for any other couple looking to get married. The fact that he is a bigot, however, actually doesn't matter. He can be a bigot in his heart all he likes, the problem is that he acted on it. If he were to make the cake, while really hating gay people, not only am I sure Jesus would forgive him, but he would not be in this mess to begin with.

It is also very much not true that we think that Jack Phillips is refusing to sell gay people baked goods across the board. No one thinks that or is even saying it! Surprise, we still think the thing he actually is doing is very wrong and illegal.

It is, however, very true that religious beliefs have been used to justify:

To name a couple!

If a customer walked into Masterpiece Cakeshop and wanted a cake with Jake Phillips’ face on it, with text that says “Jake Phillips is the Worst,” should he be forced to do that? No, of course not. The current case isn’t much different, except it involves sensitive issues of gay discrimination and religious beliefs.

It is, actually, very different. If Phillips would sell that very face cake to one customer, have it on the menu, and then refuse to sell one to another customer because of who that customer is, that would also be discrimination.

Those on the right can argue that it’s not discrimination because Phillips would have sold the same gay couple something else. Those on the left can argue that it’s not religious discrimination because no one is telling Phillips to marry another man. What remains is whether a business should have the freedom to decide what kind of work they want to do, regardless of who the customer is. Should a cheese shop have to provide non-dairy alternatives if a lactose-intolerant customer asks? Should a butcher have to sell tofu?

This would be a really poignant argument if the issue was that the gay couple wanted a cake made entirely out of SPAM, and Phillips, as a baker, did not sell SPAM cakes. A gay wedding cake and a straight wedding cake are not different products. They are literally the same product, and the only difference is that they will be eaten at a wedding where gay people are getting married. Ta-da!

Over on The Federalist, aka Land of The Hottest Takes, columnist Jeremiah Keegan argues in "Why The Cake-Baking Cases Are Really About Courts Deciding What Americans Can Believe" that if this case is not decided in Phillips's favor it will totally outlaw all the Abrahamic religions. And also feelings. Because this, he believes, is all about feelings.

Keegan starts out by talking about how very, very nice all the bigot bakers were to the gays right up until they were asked to bake a cake for their wedding and refused, as if this is proof of something:

Each case involved a hardworking and courteous entrepreneur who was more than happy to serve people who identify as gay, but refused to design any part of a same-sex wedding. In some instances, it is almost stunning to hear that the defendant was found guilty of discriminating against the plaintiff on account of his sexual orientation.

This is not actually about anyone's personal feelings towards gay people. It is not about whether or not they are "nice." It is not even about whether they, in their heart of hearts, are bigots. It is about public accommodation, end of story.

However, because Keegan seems to believe that we are legislating feelings and not actions here, he is quite sure that what all of this will lead to is it being illegal to "publicly disfavor" gay people. Quelle horreur!

If this should happen, it will not simply unjustly eject hundreds, perhaps thousands, of Catholics, Muslims, Orthodox Jews, and devout Protestants from any wedding-related businesses they have built. It will set a precedent from our highest court that it is discrimination on account of sexual orientation to publically disfavor (sic) any kind of activity that practicing homosexuals “exclusively or predominately” engage in. Given that all the Abrahamic faiths proscribe homosexual action, the decision to come out next year may truly be “religious freedom’s Roe v Wade.”

One thing that both Keegan and Blitzer may want to take into account here, if only to comfort themselves, is that people are still very much allowed to think women shouldn't vote, or think black people are the worst, or really feel like they would prefer it if interracial marriages never happened. Those beliefs can even be part of their religion, and often are!

Take a look around you, fellas! Look at all the gross Nazis, carrying tiki torches, whining about white genocide online and only ever being arrested when they kill or assault someone or otherwise break the law. You can do all the public disfavoring you want, and you will actually only get in trouble if you put that public disfavoring into action and break the law. It is actually very, very simple and not hard.

It's not about your feelings, it is not about whether you are nice, it's not about requiring businesses to sell things they don't sell to begin with, it's not about your religion or your beliefs. Hell, to some degree, it's almost not really even about LGBT rights. It's about the fact that regardless of what you personally believe in your heart, you still have to act in accordance with the law.

Hopefully, hopefully, the Supreme Court will see it that way too.

[Law and Crime | The Federalist]