Antonin Scalia Has Magic Jesus Constitution, Has So Much Jesus All Up In It 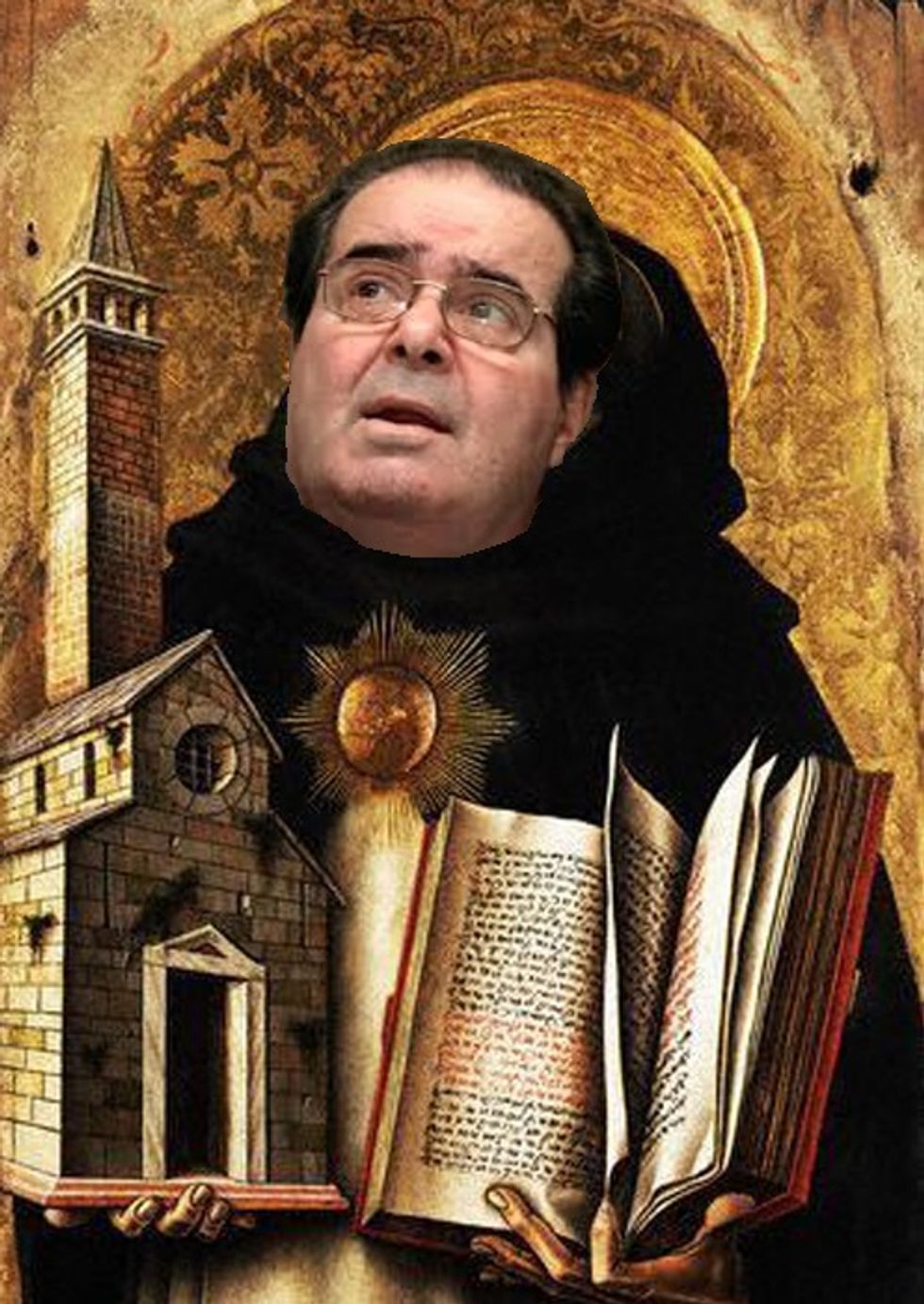 “I think the main fight is to dissuade Americans from what the secularists are trying to persuade them to be true: that the separation of church and state means that the government cannot favor religion over nonreligion,” Justice Scalia said.

“That’s a possible way to run a political system. The Europeans run it that way,” Justice Scalia said. “And if the American people want to do it, I suppose they can enact that by statute. But to say that’s what the Constitution requires is utterly absurd.”

We suppose that in Scalia's originalist, non-activist brain, "Congress shall make no law respecting an establishment of religion" actually means that as long as no laws promote any particular religion, then the state can still promote religion in general, because it's more fun to believe that government can promote God without actually endorsing religion. After all, Thomas Jefferson said that “God who made the mind of man made it free,” so if the guy who coined "separation of church and state" was OK with God, then so's the Constitution. Also, said Scalia, since we've always talked about God in our official discourse, it's impossible that the Constitution could ban that, ever:

"We do him [God] honor in our pledge of allegiance, in all our public ceremonies,” Justice Scalia said. “There’s nothing wrong with that. It is in the best of American traditions, and don’t let anybody tell you otherwise. I think we have to fight that tendency of the secularists to impose it on all of us through the Constitution.”

There is certainly nothing wrong with that, since the founders inserted God into the pledge of allegiance at the founding of our nation in 1954. Scalia also warned, as he is wont to do, of the dangers of treating the Constitution as anything but the cold dead hand of the Framers:

“Our [the court‘s] latest take on the subject, which is quite different from previous takes, is that the state must be neutral, not only between religions, but between religion and nonreligion,” Justice Scalia said. “That’s just a lie. Where do you get the notion that this is all unconstitutional? You can only believe that if you believe in a morphing Constitution.”

We hated the Mighty Morphin' Constitutional Powers, too -- the special effects and acting were sooo cheesy! Happily for Scalia, he doesn't have to worry too much about interpreting the Constitution as a Supreme Court justice, because the Constitution and the Framers' intent is just so completely obvious:

“If I had the other view of the Constitution – that it was an empty bottle, which was to be filed by my court, and it was my responsibility to decide … all these massive ethical questions -- if they were all my call, I couldn’t sleep at night,” Scalia said. “Some of my colleagues have said, ‘Oh, we agonize a lot.’ I don’t agonize at all. I look at the text, I look at the history of the text -- that’s the answer. It’s not my call.”

Honestly, since the Constitution is so completely clear on all this stuff, you sort of wonder why we have courts at all. If it weren't for liberals, then probably we could just get rid of the Supreme Court, let businesses do whatever they want to, pray that God will help them make wise decisions, and have a nice nap.