Any Random Sarah Palin Email Is Scandalous, As We Prove Here 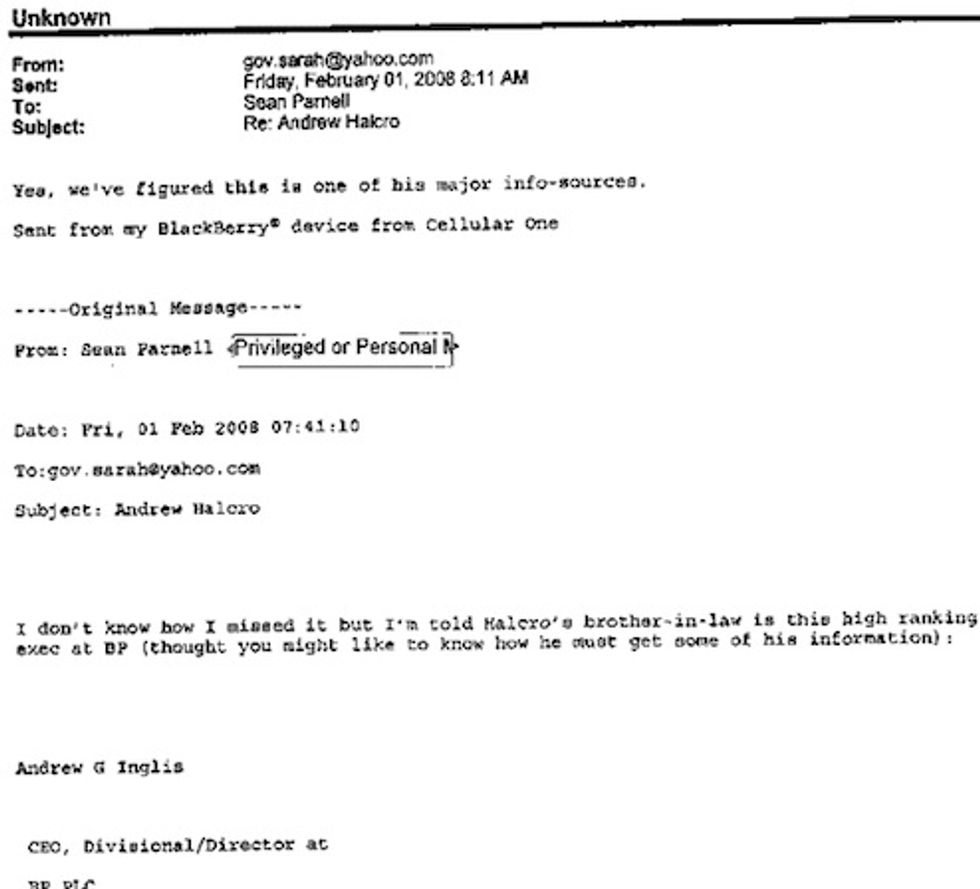 TheGuardian, America's greatest paper that is actually a socialist paper from somewhere in England, has this fun gimmick where you can see an unseen Sarah Palin Secret Email just by clicking a button. It is like Farmville, but actually dumber than that. The very first random unseen email we saw was a blank page that said "State of Alaska" at the top. Somehow not scandalous! But the very next one has a scandal involving BP and a brother-in-law and the usual paranoid Palin bullshit. So, we figure exactly half of these emails -- roughly 12,000 -- are proof of Palin's criminal snowbilly behavior. Put her in Gitmo before she emails again!

The text of this random email is something about how somebody's brother-in-law is gettin' some info Sarah Palin doesn't want somebody gettin', and it turns out this person is allegedly some Alaska bigwig at BP, the criminal oil company. Everybody is super guilty of this crime, whatever it is.

Here's the original file, gumshoes! Now let's try one more random one, because why not.

Okay, the next one is boring, somebody from yet another oil company writing something for public consumption about how the oil company should work happily with the Palin administration. SHUDDER, just the words "Palin administration" are terrifying and awful, even if they only refer to her couple of weeks as the governor of Alaska, before she flipped out totally. Let's get a CRIME MAIL, Lou Sarah, c'mon!

Oh hooray, it's another Sarah Palin gripe! She is griping about a local AP reporter's article, we think? And some mayors in Alaska are griping about Sarah Palin not meeting with them, because of whatever? And Sarah wants her people to start crushing skulls if that's what it takes, right? Hooray!

So, using this Scientific Method, we have proven that 12,000 Sarah Palin emails are full of scandals and crimes, the end. [Guardian]