Apparently Not Dead Dr. Dobson Wishes Some Real Men Would Shoot The Transgenders 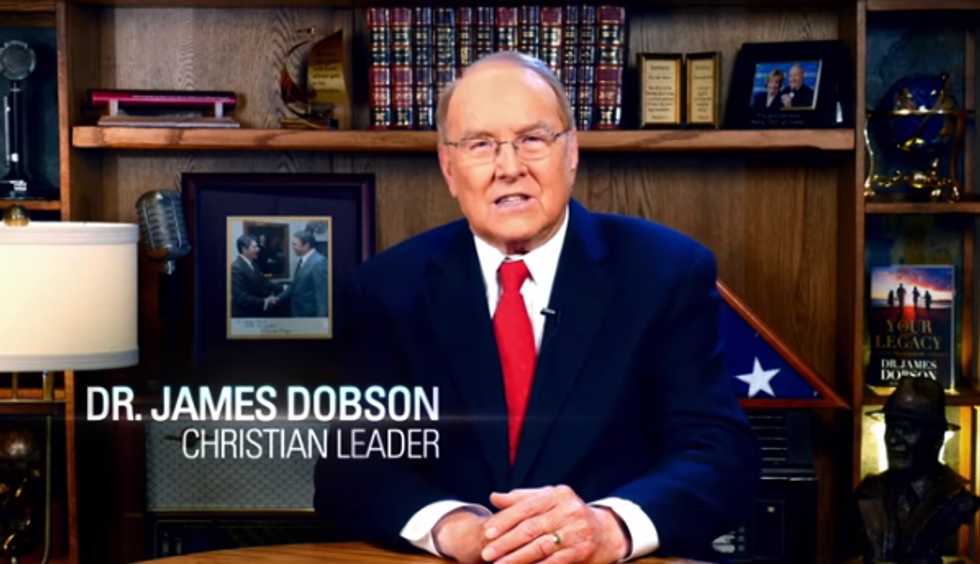 You may recall old wingnut Dr. James Dobson, who used to run the Focus On The Family organization. Well, he's apparently not dead yet, so BREAKING NEWS right there. Who knew?

He doesn't make as much noise these days, but back in the '90s and early aughts, Dobson was viewed as a pretty mainstream evangelical dude. Parents gave their kids his books about how to be Good Christian Teens. Perfectly normal-looking mommies read his book Bringing Up Boys, which is about how to raise rambunctious-yet-Godly, full-blooded, Jesus-loving American males. (NOTE: In that book, Dr. Dobson suggests that many teenage boys reject Jesus because they JUST CANNOT STOP JACKING OFF.)

And many run-of-the-mill Christians still think Dobson is the bee's tits, which is why his WorldNetDaily column about transgender people going potty is so insanely scary. He begins with an anecdote, because he always does:

When I was in the third grade, I raised my hand one day and asked the teacher for permission to “go to the bathroom.” She nodded, and I hurried down the hall to the door designated “Boys.” When I had relieved myself, I headed back in the direction of my homeroom. As bad luck would have it, the doors in the hallway all looked alike, and I opened the wrong one. Two second-grade girls were standing there with their mouths open in disbelief. Then they both screamed and pointed at me. The loudest one said, “You’re in BIG trouble!” The other shouted, “Get out of here!” Sweet kids.

I was mortified beyond belief. I sneaked back into class and looked at the floor, wondering who might have witnessed my unthinkable crime. That was decades ago, but I haven’t forgotten my humiliation.

James Dobson is 80 years old. He's still totally FUCKING freaked about the time he accidentally went in the girl potty and the kids made fun of him, and that's the closest anecdote he can think of to explain our current national nightmare of transgender people making boom boom:

Who would have believed a day would come during my lifetime when boys could meander into the private sanctuary of girls’ toilets, or that it would someday be a civil right for men to use women’s locker rooms and showers without permission or apology?

Ahem, that is not happening. Only a willfully misinformed bigot who refuses to learn the actual science facts about trans people would believe something so ridiculous.

Imagine sex-absorbed junior high boys ogling the bodies of developing pubescent girls or standing beside them in their showers. Have we gone absolutely mad?

Anyway, Dobson HATES President Obama for ordering schools to let trans kids pee in bathrooms that match their gender identities, a concept which, processed through fiendishly stupid wingnut pea-brains, is tantamount to letting grown men piss all over OUR WIVES AND DAUGHTERS in public restrooms. Think we are exaggerating?

If you are a married man with any gumption, surely you will defend your wife’s privacy and security in restroom facilities. Would you remain passive after knowing that a strange-looking man, dressed like a woman, has been peering over toilet cubicles to watch your wife in a private moment? What should be done to the pervert who was using mirrors to watch women and girls in their stalls? If you are a dad, I pray you will protect your little girls from men who walk in unannounced, unzip their pants and urinate in front of them. If this had happened 100 years ago, someone might have been shot. Where is today’s manhood? God help us!

THERE IT IS. Senile dumpster fart James Dobson thinks "strange-looking" men dressed like ladies stand up on top of toilet "cubicles" to watch your helpless wife take a whiz. He believes these same men use some kind of ninja mirror action to watch your helpless daughter pee in the stall, which must involve a LOT of mirrors, unless your helpless daughter didn't close the door to the stall. He also apparently seems to think there ARE no stalls, because here come all the men, unzipping and pissing at your wives and daughters.

And his yearning response is to ask why nobody is shooting these people dead, like they woulda in the good old days.

Dobson blabbers on for another thousand paragraphs about how Obama is a tyrant and parents must reject "gender feminism" for their children, but a WND editor really should have cut those grafs, as they are redundant and boring.

HAHAHAHA, we said a #joke, because WorldNetDaily does not have editors.