Are You Smarter Than These Gun-Toters? 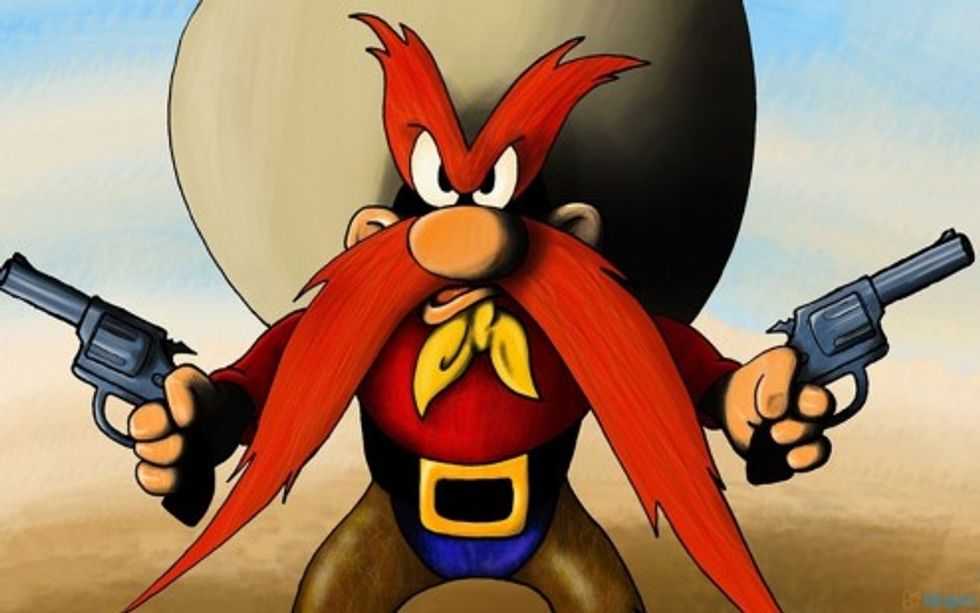 With the astronomical amounts of derp spewing into the atmosphere over the IRS, the AP, and BENGHAZI!!!!11!!!!, it is easy to forget that Americans continue every day to shoot each other with guns in ever more inventive ways. Lucky for you that yr Wonkette is here to remind you that every time you think the great American Experiment has dug deep enough down the mineshaft of Stupid to hit rock bottom, we can always break through the rocks to find another layer.

Take this particular specimen of dumbassery. What was that about arming more school employees, Wayne LaPierre? Fantastic idea. We can’t wait for the first time some police department reject working armed security accidentally kills a first-grader and the school district gets sued into oblivion. Hmmm, Aurora, why does that sound familiar? Has that place been in the news for a gun-related incident recently?

There is no word on how significant this high schooler’s significant injury might be. Hopefully the kid doesn’t lose his leg. Maybe this is all a secret plot to get us to home-school our children? Yr Wonkette is going to seriously consider it for this reason alone, should we ever be lucky enough to settle down and start a family, or accidentally knock up some floozy, whatever.

Or take this incident that occurred in Florida, because of course it did. We admit, since no one died we felt free to spend a few minutes giggling while imagining a customer saying “I’d like a decaf double-tall nonfat…” BANG!! “HOLY MARY MOTHER OF GOD MY LEG YOU SHOT ME IN MY LEG YOU NEANDERTHAL-BROWED SHITWIT AS SOON AS THE HOSPITAL RELEASES ME I’M GOING HOME AND UNFRIENDING YOU ON FACEBOOK JESUS H. CHRIST STEAMING MILK TO 150 DEGREES MY LEG!!”

Best part of that story? A link in it led us to this old chestnut from 2011. Father of the Year candidate right there! Good Lord. We were given to understand teenagers can barely be trusted to responsibly text each other on their turbocharged mcwhatsits. This guy gave his kid a loaded gun and told her to carry it around the mean streets of Cheyenne. Hey Pops, it’s not 1875. Is it 1875? We’re pretty sure it’s not.

Still, Brokeback Mountain there got off easy compared to this father in New Jersey who is facing charges of endangering the welfare of his children after one of his kids shot and killed a playmate with an unattended rifle. Police also found a whole bunch of unsecured shotguns in the house. How many kids have to shoot each other before people start locking these damn things up? Or maybe start asking themselves why they need a whole bunch of shotguns around the house in the first place? Is Anthony Senatore one of Dick Cheney’s regular quail-hunting buddies? Oh well, maybe Senatore will have a little time in prison to contemplate these questions.

How about some good news? Here, let us read about Square, a start-up that provides mobile credit-card readers of the type that flight attendants now use to overcharge you for a warm can of ginger ale and a rock-hard croissant at 30,000 feet. Square has announced it will no longer process payments for firearms, firearms accessories, bullets, or any other device “designed to cause physical injury.” Good for you, Square! Predictably the rubes in the comments of every article we read about this today are, pardon the expression, up in arms, and are goading each other to not do business with anyone who uses Square. To which we say: fuck ‘em. More warm ginger ale and rock-hard croissants for us on our next flight!

Oh, and remember Cody Wilson, the bush-league intellectual who has apparently gotten through college and law school without discovering girls? Last week yr Wonkette was all over Cody's plan to start distributing online his blueprints for a 3-D printable gun. This week the federal government stepped in and ordered Wilson to remove said blueprints from the web because distributing the plans might violate the Arms Export Control Act. Of course by the time the feds acted the plans had been downloaded over 100,000 times and are now being traded at places like Pirate Bay and Megaupload. Predictably Wilson is upset at this nanny-statism:

"I immediately complied and I've taken down the files," Mr. Wilson said. "But this is a much bigger deal than guns. It has implications for the freedom of the web"

Why the freedom of the web is more important than our freedom to not get shot, we do not know. Really we think it mostly has implications for Cody Wilson’s right to be a gleefully unreconstructed asshole who has not outgrown the joy he once felt in telling his kindergarten teacher that he would not participate in nap time. Drink a dick, Cody.

Finally, the New Orleans Police Department has named a suspect in the Mother’s Day shooting that injured nineteen people (but miraculously didn’t kill anyone). This being the NOPD, we’re going to cross our fingers and hope the cops are on the right trail. What depresses us about this story — besides the crippling injuries, the mayhem and the sadness of a nice Mother’s Day celebration ruined for hundreds of revelers — is that we are sure our fellow Americans, being a particularly paranoid, fearful, and angry lot, will take the wrong lesson and arm themselves even more, because one never knows when some punk is just going to pull out a gun and start shooting, and you could be a big hero and take the punk out and get invited to speak at the next NRA convention. Hell, you’ll probably get to sit next to the president’s wife at the State of the Union.

Actually, you’ll most likely panic and shoot the wrong person, or get yourself shot. And America will continue to not reckon with the terrible repercussions of its relentless passion for firearms, the high cost of physical care for broken bodies and the psychological cost to broken lives. Good job, you!

That’s about all the gun fun we can handle today, folks. Until next time, remember that when guns are outlawed…HAHAHAHA! Like the NRA will ever let that happen!