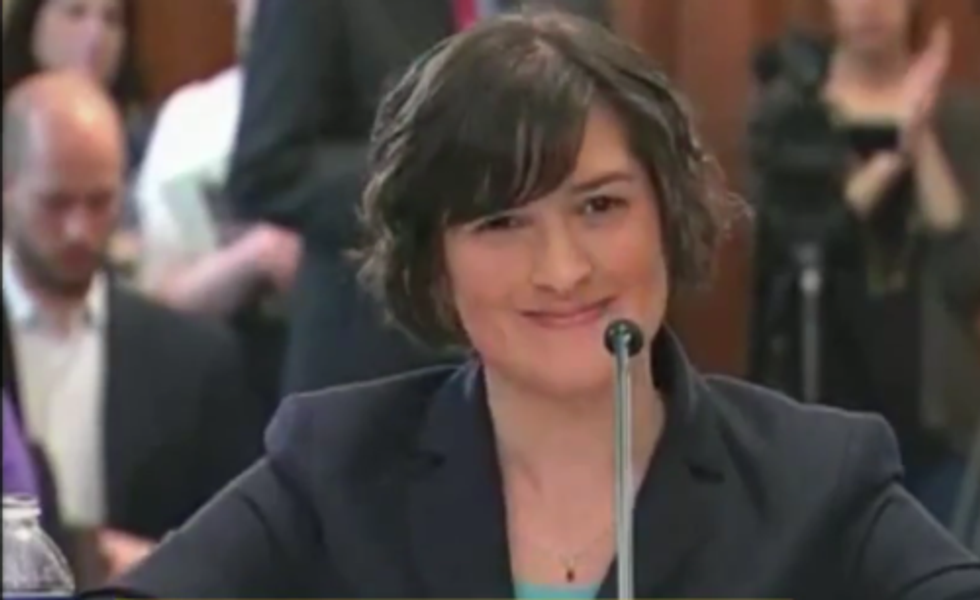 You probably remember Sandra Fluke. She's the nice young lady who testified to Congress about how birth control is sometimes used by people to regulate their polycystic ovary syndrome or whatever, and so Rush Limbaugh went fucking nuts, calling her a slut (for a week) and saying if he was going to pay for her birth control (we guess Rush Limbaugh does not really understand how insurance works?), she had a duty to produce a spank tape for him. It wasnot Rush Limbaugh's finest hour.

Well, now there is a lady, and she is a licensed clinical psychologist, although -- oddly! -- her website does not list any of her training or her schooling or her specialties except that she will psychologize your kids, which you should probably hop on, and can testify about forensic clinical psychologist stuff in four states, and those four states really might want to look into that, because this lady, well, she is a treat! She thinks Gloria Steinem is making Illuminati hand signs everywhere, and that Nancy Pelosi is here to murder all the grandbabies (that one is just obvious), and oh, so many thoughts about Sandra Fluke's "All-American, Totalitarian" vagina. Still.

Deborah C. Tyler, Ph.D., writing in American "Thinker," begins with a tale of a man who kept seeing so many vadges in a Rorschach test -- as you do. Dr. Tyler, with no irony at all, declares this man obsessed, and decides that Sandra Fluke, not she, is obsessed with the vadge, because of how Fluke studied feminism in college and ... Gloria Steinem? Some stuff. Get ready. So much blockquote comin' at ya.

Sexually oriented feminists can be divided into two generations. The central purpose of the first generation was to legalize abortion and normalize sex outside marriage. Gloria Steinem is still the leader of that generation. She, who is often seen flashing her hand signal for her vagina, like any gang-banger, is still the leading political sex fashionista of her generation.

Today, Sandra Fluke is a foremost publicity hound of the second generation of sex-feminists, the socialist ideological totalitarians. [...] Their cause is to make taxpayers foot the bill for all abortions, abortifacients, and sexually related treatments. The want to functionally criminalize Christianity through the tax code. To consolidate political power under the banner of sex ideology, as Fluke has been trying to do, it is necessary to tell the lie that access to contraception or abortion is difficult. Psychopathology flourishes in delusions of victimization.

We're just going to pull out a couple of phrases at random: "The [sic] want to functionally criminalize Christianity through the tax code." "Psychopathology flourishes in delusions of victimization." What next, Dr. Tyler? Gonna laugh at some gay kids getting beat up? Awesome.

Fluke majored in feminist, gender and sexuality studies at Cornell University. She then took those self-serving, lethal delusions to the New York Statewide Coalition for Fair Access to Family Court. Again defining people according to sexual behavior, she focused on the right for New York State’s presumptively homosexual teenagers to have special access to domestic violence civil orders. New York State’s millions of teens are not suffering primarily because there may be a micro-minority of homosexual teenagers needing restraining orders. They are suffering psychologically because most have no fathers to raise them, they are bombarded with dehumanizing stimuli from birth, and they are influenced by people like Fluke to start fornicating for the run-up to junior high.

Then Dr. Tyler calls Sandra Fluke "mentally imbalance[d]" because she used the word "absolutely" in a statement. This woman testifies about people's mental health in court. Then there is some stuff about Thomas Paine.

Then Dr. Tyler says Sandra Fluke has a "diagnosable mental illness" because Fluke said contraception could cost $3000 over the course of law school, when you could buy "500,000 condoms" for the amount these women are spending on law school. (Obviously, condoms will fix your polycystic oves right up. Also obviously, WHY WOULD A LADY NEED TO GO TO LAW SCHOOL hahaha lol dumb ladies, go get married already.)

There is a simple way to distinguish between valuable rights like those granted by the Bill of Rights and the “rights” offered by totalitarians. The former are blessedly useful to every citizen; the latter are inflicted by governmental rulers who have no use for them themselves. Women like Nancy Pelosi and Sandra Fluke are despicable because they maneuver to inflict humiliation and sorrow upon “the masses,” which they themselves will never have to suffer. The miserable Pelosi, the mother of five and grandmother of eight, enables the destruction of other women’s children and grandchildren. Fluke, a married heterosexual, sets herself up as the emancipator of homosexual people, and showboats for publicly funded birth control she will never need. Predictably, Fluke mentally decompensated when the Supreme Court ruling in the Hobby Lobby case contradicted her psychopathological absolutes.

Again, this woman is licensed to testify about people's mental health in four states, "Oregn," Washington, New Mexico, and South Carolina. Somebody should really probably do something about that.

Meanwhile, you can send money to Sandra Fluke's vagina here.