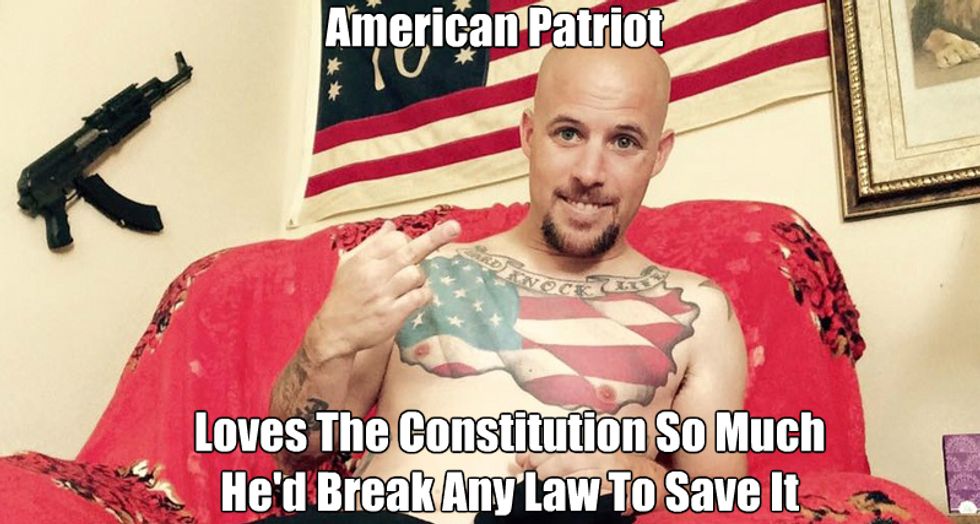 Oh, but that's the whole point, don't you get it? The Constitution has to be rescued from the law! Come see the violence inherent in the system!

Remember that idiot in Arizona who bravely organized the Great Big Phoenix Mosque Protest, then whined and begged for money to buy guns after he believed the big bad Muslims were coming to get him, and also fretted after he'd screamed and demanded publicity that he didn't have any privacy anymore? Yeah, that guy, proud former Marine Jon "Fuck Islam" Ritzheimer. Well by gosh, he is once again putting his life on the line for America (and publicity) with a plan to go to Michigan and "arrest" Sen. Debbie Stabenow for her treasonous vote on the Iran nuclear arms deal. If he can bum some money from the internet for gas and ciggies and Freedom Ammo, at least.

On the nigh-unreadable "Time to Rise" website, which appears to be in its second week of existence, Ritzheimer posted an "open letter" outlining his cunning plan:

On October 10th 2015, I, along with a growing number of patriots, will be saying goodbye to my loved ones once again and starting my journey from Arizona to Michigan. We are planning on driving through Texas to link up with more Marines and Patriots and then heading North towards Michigan. We are planning on arresting Senator Debbie Stabenow, who voted yes to the Iran Nuke Deal. She will be arrested for treason under Article 3 Section 3 of the Constitution.

Oh, yeah, that seems reasonable. As everyone who's read the Constitution knows, the power to accuse and try people for treason is reserved not for the courts, but for random wackos on the internet. But Ritzheimer and his Merry Band only see Stabenow as a start. Why her, by the way? The reason should be familiar to anyone who knows real estate: Location, location, location:

We have chosen her as our first target due to our strong ties with the Michigan State Militia and their lax gun laws that will allow us to operate in a manner necessary for an operation like this.

Huh. You don't often see a gun-humper describing any state's gun laws as "lax." We doubt that Ritzheimer and his Band of Bothers will actually manage to accomplish much more than making complete idiots of themselves, but this letter makes for pretty compelling evidence that bloody-minded loons like to take advantage of lax gun laws. Thanks for doing your part to encourage stricter gun laws, idiot!

So what's next in his program of Fixing America?

After we successfully detain her we will continue to move across the country and arrest everyone involved with the Iran Nuke Deal. Even the President who brokered this deal. America is still at war with terrorism and Iran is the leading sponsor of terrorism throughout the globe. I have been to war and I do not want to see bloodshed in our own country. We do not seek violence but we will be armed and ready to defend and uphold our oath to the constitution.

We'd like to think he realizes that we're not actually in a declared state of war, and that an arms reduction treaty is rather different from "providing aid and comfort to the enemy," but then, we're clearly lacking the keen Constitutional logic to understand why he thinks this is his job. By that logic, Ronald Reagan should have been prosecuted for negotiating with the USSR, and FDR should have been shot on sight for allowing the Germans and Japanese to surrender. We were at war with them, so why did he accept a treaty???

Also, asshole, once you were discharged from the Marines, your oath became irrelevant: You are no longer in the chain of command, and that the Constitution doesn't give you the power to declare personal war against perceived enemies. Really, you don't have that right. Did you talk to a lawyer before starting this "mission?" Or a psychiatrist?

Happily, Ritzheimer understands that he and his imaginary militia friends can't just shoot all the traitors: They have to give them a show trial first, just like the Constitution says:

There is no reason these people can’t be held accountable and have their day in court. ... If these people are innocent, then it should be proven in court. But there is overwhelming evidence stacked up against them that says otherwise.

Yep, that's the first rule of American jurisprudence: the accused is assumed to be guilty, but has the right to prove their innocence. This man sure does love the Constitution a whole bunch!

Ritzheimer assures us that while he's "not seeking fame or fortune," he is at least "humbly accepting donations to help with fuel costs for our convoy," presumably because right now, he has only one full tank of gas, half a pack of cigarettes, it's dark, and he's wearing sunglasses. Hahaha, we are kidding -- Jake and Elwood would drive circles around Jon and the Good Ole Boys.

Still, Ritzheimer's love for the Constitution practically bleeds off every sentence of his manifesto, like this part, where he explains that with him and his pals taking care of us, voting is actually unnecessary, as provided for in Article Spoon, Section Guano:

Our strength is in our numbers. We The People are what will fix the problems in our country. Not some election.

It's enough to make Hamilton, Adams, and Madison weep with pride, isn't it? Needless to say, he says he's willing to die in his noble cause if it will keep America safe from the Iran treaty. Not that he wants bloodshed, mind you. He's just ready for it if it becomes necessary.

As proof that we're no longer living in a free country, U.S. Capitol Police are already investigating Ritzheimer's thoughtful ideas for making America better, and they are coordinating with police in Michigan to keep tabs on the situation. It's getting to where a patriot can't declare his simple intention to abduct a U.S. Senator and put her on trial without people blowing everything out of proportion. Look, he said he's doing it because he took an oath to the Constitution, so that ought to make it OK, right? Don't those fascists have any respect for the Constitution?