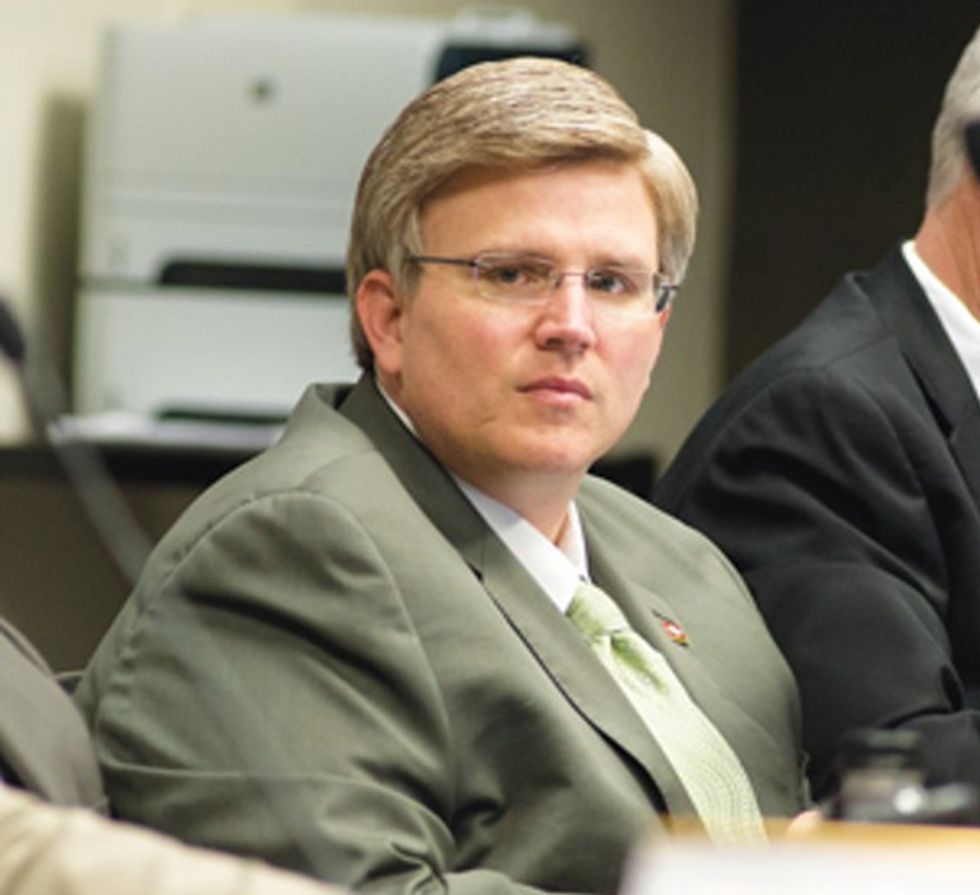 In with all the excitement around gross child-bad-touchers Josh Duggar (admittedly) and Dennis Hastert (allegedly), we also got an update late last week on terrible human being and Arkansas state Rep. Justin Harris (R-Ewww), the super-Christiany guy who adopted two little girls, then "rehomed" them with a friend and employee who would later go on to rape one of the girls. After the initial flurry of reporting and OMG/WTF stories about Harris, the Arkansas Times has kept on the story, and published a substantial follow-up on Harris Friday. And what do we learn? Justin Harris is still a big Jesusbag in the Arkansas House, he voted himself a pay raise, and as of right now, it sure looks like he's not going to face any consequences for discarding a couple of adopted children. Maybe he'll manage to lose in 2016. He's still quite certain that he's done nothing wrong; when he returned to Twitter after a few months -- with his messages only available to approved followers, of course -- he posted a couple of lines from Psalms 37:12-13 to make it clear that He Will Survive:

But the Lord laughs at the wicked, for he sees that his day is coming

Flashback To The Gory Details

Just to recap, Harris is a Godly family-values Republican who, with his wife Marsha, runs a daycare called "Growing God's Kingdom Preschool" in West Fork, Arkansas, which rakes in a very healthy income, roughly 90 percent of it from state and federal subsidies for low-income children, even though, being a small-government conservative, believes government spending does not create jobs.

But what really put Justin Harris on the national radar was the horrifying saga of the Harrises' adoption and abandonment of their daughters. The Arkansas Times has constructed a handy timeline of the whole sorry affair, from the girls' initial entry into the foster care system in 2011 after a meth fire at their birth mother's home, up through today.

It's such a horrible story that it almost defies summary: The Harrises claimed that the girls, perfect angels before the adoption, suddenly turned feral and threatening to the rest of the family as soon as the adoption went through; a babysitter for the Harrises claims, however, that the couple said the girls were possessed by demons, and that the family kept them locked up in separate rooms with surveillance cameras to watch them (the Harrises deny this allegation). The Harrises insist that the Department of Human Services (DHS) threatened to prosecute them for abandonment if they tried to undo the adoption, which is why they sent the girls to live with Eric and Stacey Francis, friends of the Harris family, just months after the adoption. Eric Francis was also hired as a teacher at Growing God's Kingdom. In January 2014, Eric Francis raped the older girl; he was arrested in April of that year and eventually sentenced to 40 years in a plea deal. Finally, in March of this year, the Arkansas Timesbroke the story that Harris had handed his adopted daughters off to a man who raped one of them.

So, About those Demons...

And what do we know now that we didn't know before? For one thing, current and former employees of Growing God's Kingdom, speaking on condition of anonymity, told reporter Benjamin Hardy that while the girls -- the paper calls the older girl "Mary" and the younger one "Annie" -- attended the preschool, they had witnessed Marsha Harris say that the younger girl was possessed by demons. When the girl wet her pants, Marsha Harris insisted that it was "no accident," and explained that demons were causing the preschooler's behavior problems:

Another worker says that she had seen Marsha Harris pray over an unrelated two-year-old at the daycare, again because demons were supposedly at the root of normal toddler behavioral issues:

"I watched her do it. Twice, it happened with a difficult child. He was a biter, a fit-thrower — regular 2-year-old behavior." Although she only saw a few such instances firsthand, she said that kids were also sometimes taken to Marsha's office to be prayed over. "I couldn't tell you how many times that happened."

Your tax dollars at work!

Where Are They Now?

As for Justin Harris himself, he's doing pretty well. He resigned the vice-chairmanship of the House Committee on Aging, Children and Youth, Legislative & Military Affairs, which oversees the budget for DHS, but remains a voting member of the committee. The Arkansas General Assembly voted to make rehoming a class-D felony, but since Justin Harris sent his daughters to a rapist 18 months before the law went into effect, he's good. No efforts have been made to censure Harris, and no leading Republicans in the state have called on him to resign. Gov. Asa Hutchinson, when asked if Harris should face consequences for his actions, said only, "I don't want to comment on any investigation that may be ongoing." So maybe there's a formal investigation of Harris...or maybe there isn't. House Majority Leader Ken Bragg didn't confirm or deny an investigation either, saying in an email:

"I think the whole story must come out before this can be determined in full. We need to understand the extent of the relationship between Justin Harris and DHS. I think that is one of the key drivers in this situation. A resignation now would be premature until we know fully both sides of the story."

As Hardy notes, that's a more cautious statement than Bragg's comment on Harris back in March, when he said Harris was "a dedicated Christian, a family man with the highest integrity who cares deeply for the welfare of children." And we also learn that ABC's newsmagazine 20/20 will be doing a story on Harris, with which he's been quite cooperative; that will air sometime this summer.

Oh, and one other Justin Harris update: Back in March, we noted that Harris had introduced a bill to loosen fire safety codes on buildings owned by childcare facilities, dropping the requirement that they have sprinkler systems just as long as they didn't have "commercial cooking equipment" in their kitchens. You'll be happy to know that that bill died in committee. So there's one blessing to count. But Justin Harris is still looking forward to seeing his wicked enemies crushed by the Lord.

[Arkansas Times; hat tip to Benjamin Hardy alerting us to the update]