Arkansas Gentleman In Jail Just For Loving Bible Too Much, Threatening To Kill Seven Mayors 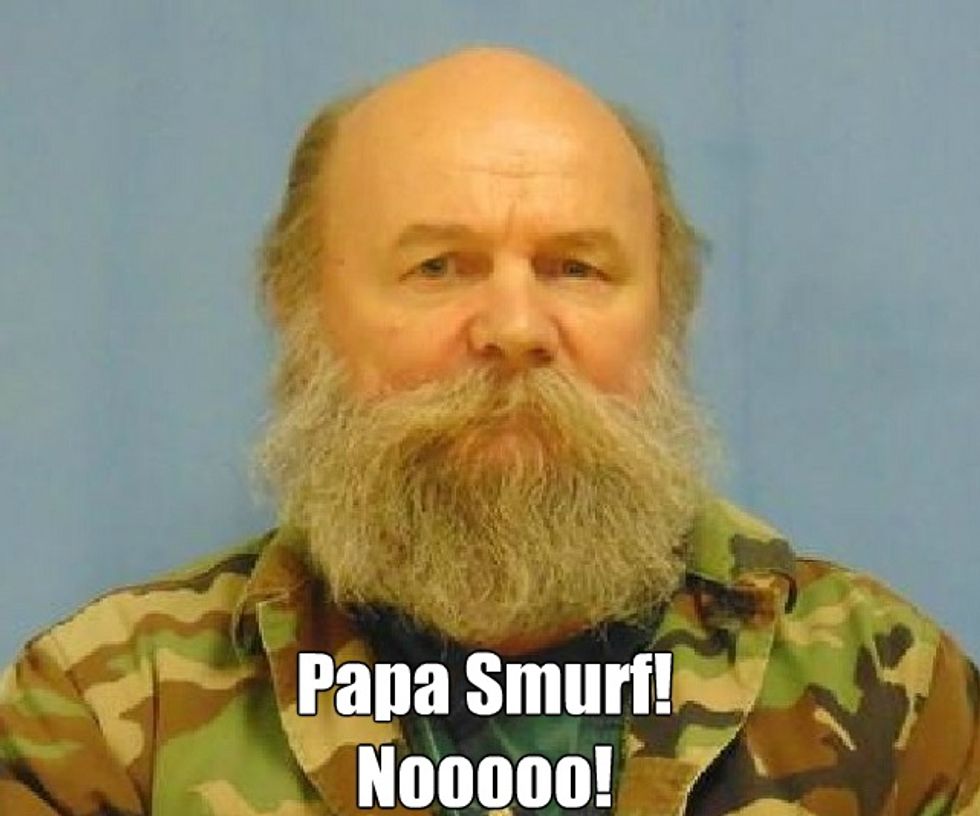 Guys with beards this epic are either brilliant or fucking nuts

An Arkansas man who threatened to hang seven mayors if they didn't replace the Common Core curriculum with Bible-based education is headed back to jail. U.S. Magistrate Judge Caroline Craven had originally released Maverick Dean Bryan after a March 28 hearing, but U.S. District Judge Susan Hickey was persuaded by Assistant U.S. Attorney David Harris that Bryan poses a threat to the public. Seems like a pretty good call to us.

Dean had sent letters to the mayors of Ashdown, Hope, De Queen, Lewisville, Nashville, Prescott and Murfreesboro, in which he threatened to hang them from "mighty oaks" on the lawns of local courthouses if they failed to eliminate Common Core and begin teaching religion in the classroom, exactly like America is supposed to work. The Texarkana Gazette reports that at his original detention hearing in March, Bryan also

admitted...to being the author of an advertisement that ran twice in the Thrifty Nickel last year seeking a $23 million loan to raise a Christian army to overthrow the U.S. government.

That's one of the problems faced by your inexperienced domestic terrorists: They simply don't understand the intricacies of modern fundraising and go to the Thrifty Nickel or Craigslist to seek support.

In addition, the letters to the mayors demanded

that the mayors no longer honor the votes of anyone who is homosexual, Muslim, socialist, communist, atheist, or who worships any God other than Jesus Christ, and that anyone fitting those definitions be required to “exit.”

Clearly a strict Constitutionalist, then, at least insofar as he understands the Constitution in his head.

At that March 28 detention hearing, Bryan did offer a number of compelling arguments for eliminating the "filthy Common Core" and replacing it with Christian madrassas. For one thing, he testified,

he wouldn't be "the man I am today," had he not been taught the Ten Commandments at the same time he was learning his ABCs.

That may not have been quite the testimonial to the efficacy of religious education he was shooting for. Bryan also tried to clarify that he wasn't necessarily threatening any harm at all, though once again, it may not have come across quite as effectively as he'd hoped:

Under questioning by Texarkana lawyer Jeff Harrelson, Bryan said he often hangs himself with rope from tall pine trees.

"I can hang you in a tree, put a diaper on you and hit you with a switch," Bryan said. "But I never meant no harm to no man."

Bryan explained that he wanted to get the officials' attention.

"I wanted them to think. I know they're too arrogant to act," Bryan said under questioning from Assistant U.S. Attorney David Harris.

An FBI agent testified that when a confidential source wearing a recording device met with Bryan in response to his Thrifty Nickel ad, Bryan was recorded saying he wanted to hang all living U.S. presidents, "especially Jimmy." Poor Jimmy! Why him, for heaven's sake? Bryan testified at the hearing that he didn't recall specifically saying anything about hanging any presidents. "Prison, yes. But that's what we used to do for treason in America."

So clearly, he thought all this through. It's not like he was going to hang any presidents himself. The Christian Army would presumably do that after a fair trial, though possibly not one held by the corrupted federal court system.

Judge Hickey was further persuaded that Bryan posed a risk because he had repeatedly ignored orders not to own guns, which should surprise absolutely no one, since any fool knows the Second Amendment overrules all other parts of the Constitution. Her May 2 order sending him back to jail before trial specified,

“Thus, Defendant has repeatedly demonstrated his unwillingness to abide by the laws concerning the possession of firearms by a convicted felon. This pattern of disobedience poses a threat to the safety of the community and gives the court little hope that Defendant would abide by any conditions set by this court.”

Assuming he doesn't freak out over gold fringe on the flag in the courtroom, Mr. Bryan is scheduled for trial later in May, on seven counts of "mailing threatening communications." If he's convicted, he faces up to five years in prison and fines of up to $250,000 on each count, but a conviction seems unlikely, given the indisputable fact that we're living under a tyrannical dictatorship. Perhaps Alex Jones can testify on his behalf.