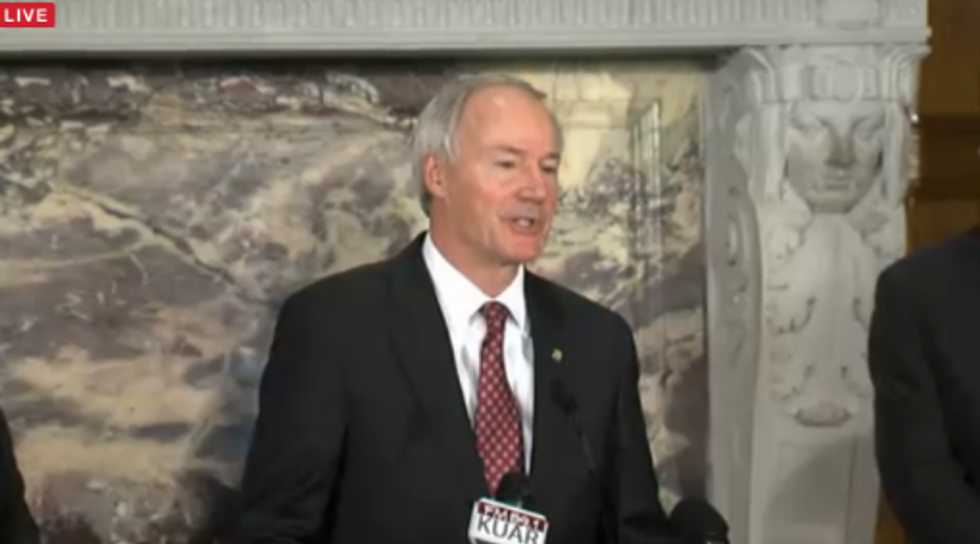 Having learned nothing from the PR disaster in Indiana this week, the Arkansas legislature passed its own Religious Freedom Restoration Act (RFRA) on Tuesday, sending it to the desk of Republican Gov. Asa Hutchinson. The bill, HB 1228, is a close facsimile of the one signed by Gov. Mike Pence, and, just as in Indiana, has resulted in several corporations threatening to cease or reduce operations in the state.

Gov. Hutchinson held a presser Wednesday to address the controversy over Arkansas's RFRA and answer the question everyone is asking: Is he as dumb as Gov. Pence?

"This is a bill," Hutchinson said, "that in ordinary times would not be controversial. These are not ordinary times. This bill is not really complicated." He noted that the bill in its current form "does not precisely mirror" the federal RFRA signed by President Bill Clinton, which would indeed be relatively uncontroversial, and has asked that "changes be made in the legislation" to more closely mirror that federal law, which will clearly make the religious right unhappy, as the special new parts of these state RFRAs are the ones that give them the most freedom to hate on the gays. The governor also floated the possibility of using an executive order to "make it clear that Arkansas wants to be a place of tolerance." As such, Hutchinson will apparently not be signing HB1228 any time soon.

Hutchinson expressed a desire for a law that "protects those of religious conscience but also minimizes chances of discrimination in the workplace and also in the public environment."

Senate President Pro Tem Jonathan Dismang (R-Searcy) also addressed concerns, saying that "it’s premature to say that there’s going to be an agreement” on making modifications to the existing bill, although he also insisted that the bill the legislature passed does not allow discrimination.

It is not Big Gay that is coming down so hard on these laws, but rather Big Business, usually a conservative's best friend. Dodging a question about whether gays and lesbians are entitled to civil rights protections -- he dodged several of those -- Hutchinson said, "In terms of where we go in society, I don't believe in a workplace that discriminates, whether it's Tyson, whether it's Walmart, whether it's Dillard's or whether it's state government."

Walmart CEO Doug McMillon surprised many by issuing a statement against Arkansas's Fuck The Gays bill, extolling diversity and stating that such laws, which purport to protect religious freedom, but in reality simply give gay-hating wingnuts a free pass to discriminate, are inconsistent with Walmart's values. McMillon ended by asking Gov. Hutchinson to veto the bill. When a conservative bill has lost Walmart, it might be time to reconsider things, maybe? There are of course wingnuts threatening to boycott Walmart, but ha ha ha, that will not happen, they are addicts.

Strong statements against the bill have also been issued by the Arkansas bishops of both the United Methodist and Episcopal churches, which bring to mind the Disciples Of Christ's threats to move their annual convention out of Indiana in protest of their Fuck The Gays law. The presence of mainstream Christian denominations on the right side of these issues exposes just how little about "religious freedom" these laws really are.

'Injustice anywhere is a threat to justice everywhere,' Dr. Martin Luther King, Jr. told us, and those words are as true today as they were half a century ago. In our home state of Arkansas, legislators are attempting to enshrine their own hatred into law…Once again, opponents of equality are giving credence to those who would refuse to serve their own neighbors under the guise of 'religious liberty,' telling us that our freedom of religion, cemented into law by the Constitution and by state law, is under attack. But we stand with our lesbian, gay, bisexual and transgender brothers and sisters, as well as religious minorities and others who could fall victim to discrimination under HB 1228, and we stand against this dangerous and derogatory legislation in its current form. This bill must be amended to protect civil rights or abandoned entirely.