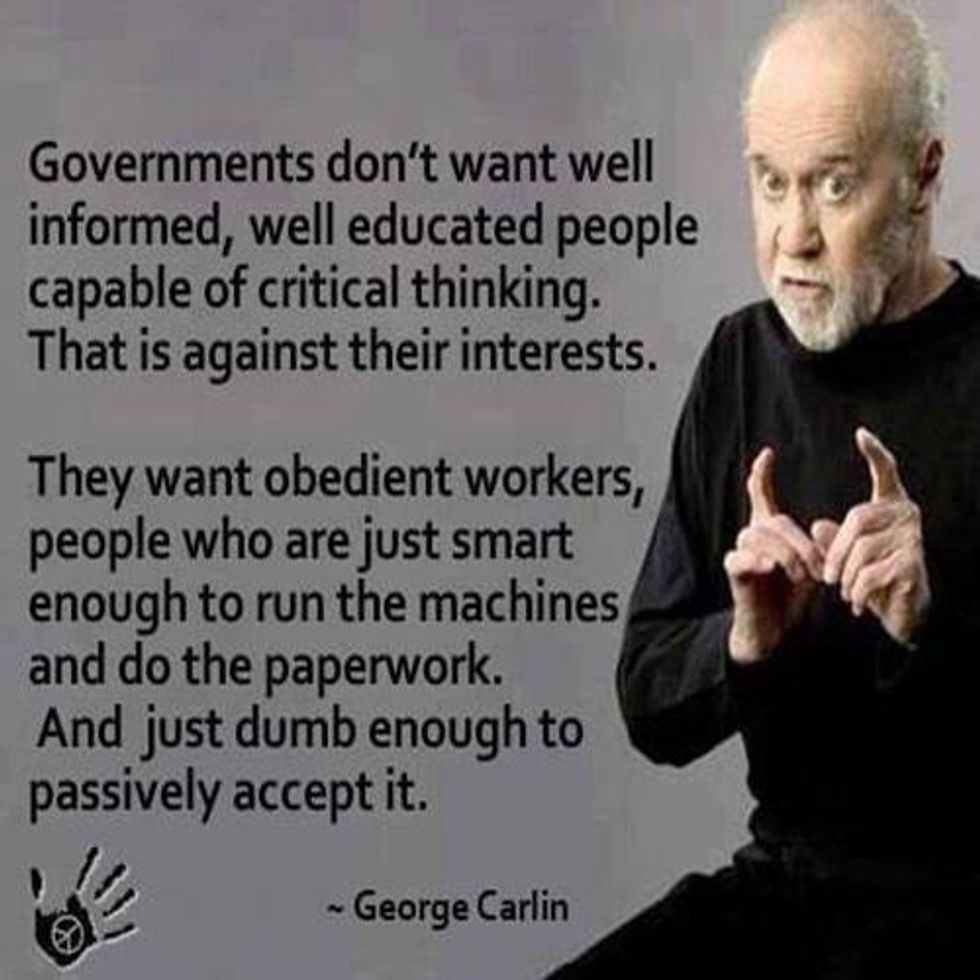 We love us some George Carlin. We can think of no higher occupation than Foole. We even love his later ranty years, those concerts where he was so thoroughly disgusted by the Damned Human Race and our institutions that it took a conscious act of will for him to go out on stage and not just howl for an hour. Which, OK, he certainly did, only he at least included some nouns and verbs. We'd like to think Carlin would have gotten a certain grim satisfaction from seeing one of his own rants remixed and brutalized by corporate pimps, because he could at least point to it and say This is exactly what I was telling you fuckers about.

This is not to say we don't share the disgust of the Daily Kos writer who found this thoroughly bastardized George Carlin "quote" on the Facebook page of the Heartland Institute, the nice corporate-funded folks who brought us those charming "Ted Kaczynski believes in global warming" murder billboards a couple years back. It pulled a few lines from the routine up top, gave them an anti-government libertarian spin, and removed any reference to the moneyed shitheads who in a better time would have been the first up against the wall:

We won't reprint the full transcript that the Kos article provides; it's really rather impressive, though, that a group so dedicated to the very sort of anti-thinking agenda that Carlin rants about in the routine would use him as an avatar of corporate libertarianism. It's not even so much that the fake quote portrays Carlin saying "Governments don't want well-informed, well-educated people capable of critical thinking" instead of the actual "The big wealthy ibusiness interests don't want that" -- hell, the bit dismisses the power of government, not because government is evil, but because it was already fully purchased and neutered by the moneyed bastards under Reagan:

We aren't even so sure that the "corrected" version put together at Kos is all that much better, apart from being an accurate collection of pull-quotes from the Carlin routine:

This has the benefit of being Carlin's actual words, but without the surrounding refrain -- "You have no choice. You have owners. They own you. They own everything ... They've got you by the balls" -- it seems a little bit too optimistic and hopeful, because the part of Carlin's rant that both versions leave out is that this isn't gonna change:

And, now, they're coming for your Social Security. They want your fucking retirement money. They want it back, so they can give it to their criminal friends on Wall Street. And you know something? They'll get it. They'll get it all, sooner or later, because they own this fucking place. It's a big club, and you ain't in it. You and I are not in the big club.

This country is finished.

Carlin was not big on the hope and change thing; not because he distrusted government, but because he had an abiding disgust for people in power and not a lot of hope that anything would improve. He was way beyond any solace from communing with tortoises in the desert, and had maybe even given up on the idea that satire could help, except perhaps to make the bad shit a little easier to bear.

For their part, we should probably mention that this chopped-up Carlin quote did not originate with the corporate whores at the Heartland Institute -- they just found an image macro that is all over the web in nine million versions, with "government" as the bad guy every single time. It just appeared to match their agenda. Once they got a virtual earful from Carlin fans, they posted an apology that Carlin would have loved tearing into:

A recent post on this Facebook page has caused some controversy. We posted an image of George Carlin along with a quote attributed to him. We discovered, thanks to the diligence of Carlin fans following us that the quote was taken out of context.

In addition to producing extensive original commentary, we attempt to serve as a clearing house for interesting and informative quotations and thoughts by academics, statesmen, and other public figures. It was through that latter endeavor that we came across the quotation in question. Ordinarily we check carefully to establish the veracity of these posts before reusing them, but in this instance we failed to do so.

Our intention is always to provide accurate quotes and information, and we acknowledge our failure in this instance. We did not design the meme we posted, but because we did post it, we own it. We apologize for the error.

Oh, also, we like to make up complete bullshit about climate change. Sorry about that, too.

Anyway, one instance of a bogus George Carlin quote has been removed. Victory is surely at hand.