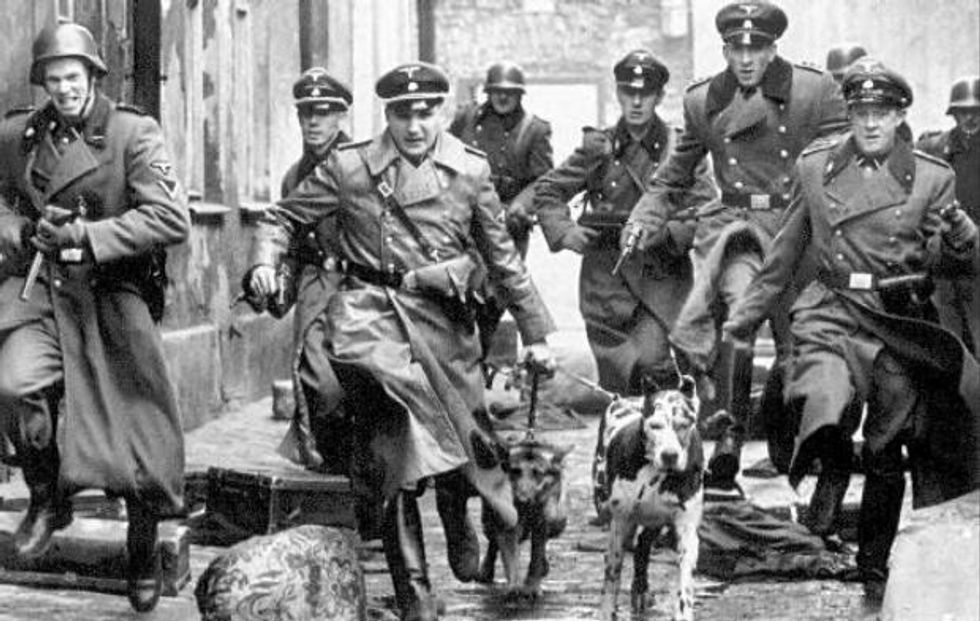 Today's "ICE fuckery is the worst fuckery" story comes from the Los Angeles Times, in the form of some jaw-dropping investigative reporting on American citizens being detained by Immigration and Customs Enforcement, and often put on a path toward deportation, thanks to crappy ICE databases. The problems with ICE's spotty record keeping are, of course compounded by immigration officers' widespread assumption that anyone claiming to be a citizen (or legal immigrant) is obviously lying, because they wouldn't have been arrested if they were innocent, now would they?

The LAT investigation found over 1,480 people who were released by ICE between 2012 and this year after the agency found they were citizens, according to internal ICE records. On top of that,

[A] Times review of Department of Justice records and interviews with immigration attorneys uncovered hundreds of additional cases in the country’s immigration courts in which people were forced to prove they are Americans and sometimes spent months or even years in detention.

It's immigration court, after all, where there's no such thing as innocent until proven guilty. Yes, to a remarkable extent, really.

The LAT piece explains that ICE has become so dependent on an array of government databases that nobody in the agency really bothers much with paper records, even -- sometimes it seems especially -- when those paper records contradict the computer files, as in the case of Sergio Carrillo, a US citizen since his teens (his mother became a citizen in 1994), who was arrested by ICE and held for several days. His son brought Carrillo's passport to the detention facility, but nobody wanted to look at it. He was released once an attorney intervened in his case, but by then Carrillo, a landscaper, had lost thousands of dollars in work and his phone was full of angry messages from clients who thought he'd stood them up. Oh, and why didn't ICE notice he was a US citizen?

Digital copies of Carrillo’s fingerprints and certificate of citizenship had never been entered into federal databases, and his name was misspelled “Cabrillo” in a central database used heavily by ICE officers. There also was no evidence ICE agents checked if Carrillo held a passport.

Funny, though: ICE was able to find a record of Carrillo's convictions, years ago, on charges of having a concealed weapon and sending inappropriate images to a minor, so if he really had been an undocumented immigrant, he'd have been a top priority for deportation. And yes, those crimes don't make him the most sympathetic character, but we don't deport citizens, even those with criminal records (we can probably look forward to some portion of the Dipshitariat insisting we must now strip citizenship from convicts). Still, things eventually worked out, sort of:

Carrillo sued for false imprisonment and was awarded a $20,000 settlement, but ICE made no admission of wrongdoing. An agency spokeswoman declined to comment, citing Carrillo’s right to privacy.

The Times investigation shows that wrongful arrests of citizens make up only a tiny fraction of the more than 100,000 arrests the agency makes annually, but it's disturbing that ICE is so reliant on bad data -- compounded by its own fuckups -- and that US citizens have to go through hell to prove they don't belong in detention at all. And here's one of the report's more ominous findings:

A decade of Justice Department records analyzed by the Times show the success of defendants making U.S. citizenship claims more than doubled if they had an attorney.

Of course, since immigration courts are outside the regular justice system, people caught up in the system have no automatic right to a public defender. If they get legal representation, it's because their family hired a lawyer or found pro bono representation through a nonprofit.

There are plenty of outrageous examples in the story, like that of a 10-year-old boy (a citizen) from San Francisco detained for two months in Texas. Or a Los Angeles man (a legal resident with no criminal history) whose attorney spent a year and a half getting ICE to correct the database entries for him after an ICE agent in another state connected his records with those of a deported felon. The deported felon had tattoos all over his face, but the attorney had to bring in handwriting and fingerprint experts to finally untangle his data from that of her client, who had committed the crime of having a similar name.

Or perhaps the Guatemalan-born woman who became a naturalized citizen in 1995, was wrongly listed as undocumented when she was arrested by county sheriffs in 2004, and then was turned over to ICE in 2009 because the database said she was here illegally. Lucky her! After being strip-searched, having her anxiety meds taken from her, then held overnight and having panic attacks (while guards mocked her claims of citizenship), she was released when her husband brought her passport to the federal office where she was being questioned. She still sobs when talking about it nine years later, because no one would believe her. Fortunately, the LAT comments are full of American Patriots who explain that any system has some errors in it, and most of the cases in the article happened before Donald Trump was president, so why are you liberals making a fuss about this anyway?

Incidentally, the article does note that ICE cases involving citizens "dropped significantly" after 2013, when the Obama administration began enforcing deportation cases more selectively, focusing on criminals. It stands to reason that Trump's "undocumented = criminal" policy will increase the number of citizens who are wrongly scooped up, but hey, it's not like they voted for Trump.

The most horrific story in the piece is that of Davino Watson, a Jamaican-born man who became a citizen as a minor when his father was naturalized. In prison in New York on a drug charge, Watson was handed over to ICE when he was eligible for release, and ICE kept him in lockup for three and a half years, Alan, after some idiot searched the immigration status of Watson's father -- but entered the wrong middle name. And even after ICE eventually sorted out who Watson really was, they continued to hold him. Federal lawyers

seized on a new U.S. reading of Jamaican law to argue Watson should be deported because his father was not his legal guardian when they left the island nation.

Watson was ordered deported, and lost appeal after appeal in immigration court, all the way up to the Board of Immigration Appeals. Once he took the case to US district court, Watson finally got a court-appointed attorney, who eventually got Watson released. After three and a half years when he never should have been imprisoned. Then again, he was involved with drugs, so perhaps summary execution would have been more efficient.

As Yr Wonkette says, read the whole thing. Yes, this shit started before Trump, but his drive to deport everyone will only make it worse. Of course, ICE's apologists will sigh and patiently explain that no system is perfect, and all these folks eventually got things sorted out, and what can you do? We're sure they'd be every bit as blasé if a similar rate of error at ATF or the FBI led to a few thousand people having their guns taken away because their names resembled a felon's.

And just in case you're not angry already, here's a video retweeted by New York gubernatorial candidate Cynthia Nixon, of an ICEman questioning everyone at a Syracuse bus/rail station about their citizenship.

This video was just sent to me from Syracuse showing Customs and Border Patrol intimidating people as they get on their buses and trains.

On my way right now to Syracuse to talk about this. pic.twitter.com/k19nROR9zU

But don't worry -- it's perfectly legal, since Syracuse is within 100 miles of the border with Canada. Business as usual, please move along. Makes you feel a hell of a lot safer, doesn't it? (And three cheers for the woman at the end, who informs the officer she doesn't need to show him her stinking papers.)

Yr Wonkette is going to have to look into whether we can make a few bucks selling weatherproof passport/immigration document holders on a stylish lanyard, so everyone can be ready when the ICEstasi asks, Papers, please!

Yr Wonkette is fueled by reader donations and incandescent rage. Please click here to help convert some of the latter into text.