At The Movies With Donald Trump: The Greatest, Classiest Review Of Dark Knight Rises 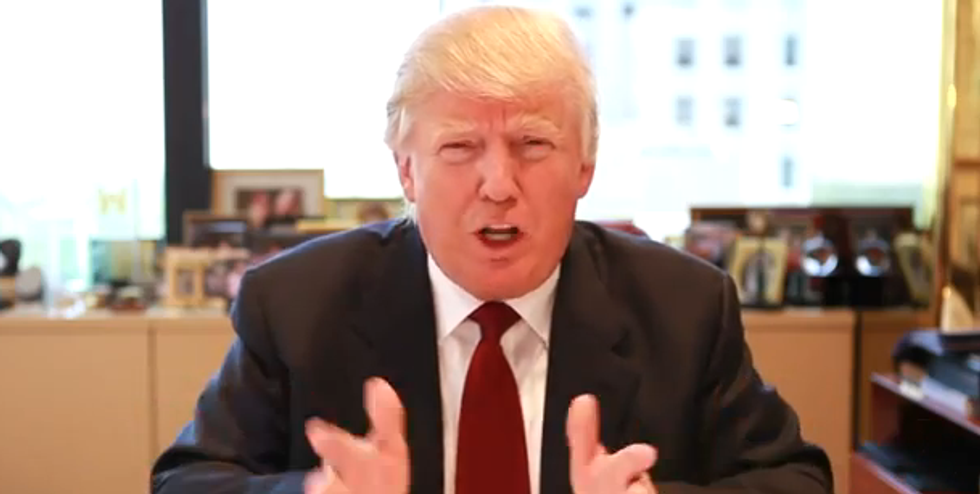 Gelatinous swamp-thing Donald Trump has taken to his Youtube again, and the result is a veritable Cindy Adams column of nonsequiters from the new Batman movie (have you heard? There is a new Batman movie) to his nuanced take on Anthony Wiener's "sexual perversions" ("he was never good before and he really turned out not to be good") to OPEC to Obama's college transcripts. Only in New York, kids! Only in New York! But the Daily Caller, it seems,does not care for Trump's brand of narcissist thuggery (it's not as sophisticated a narcissist thuggery as Tucker Carlson's), and they make fun of him! Like this:

Trump explains that the masses have requested his thoughts on a variety of subjects, and he has decided to humor the people by bequeathing his film knowledge upon the plebeians.

“Many people have been asking me to review things, especially movies,” Trump says during his opening remarks. “So last night I went to the opening of ‘The Dark Knight Rises’ which is commonly known as ‘the Batman movie.’”

Thank you for that clarification, Mr. Trump, for without you we commoners would not have known that “The Dark Knight Rises” was the same as “the Batman movie.”

Anyway, here is a video of Trump yelling at the camera all derp derp derp. Because that is what your day was missing until now.