At The New York Times, A Slow News Day 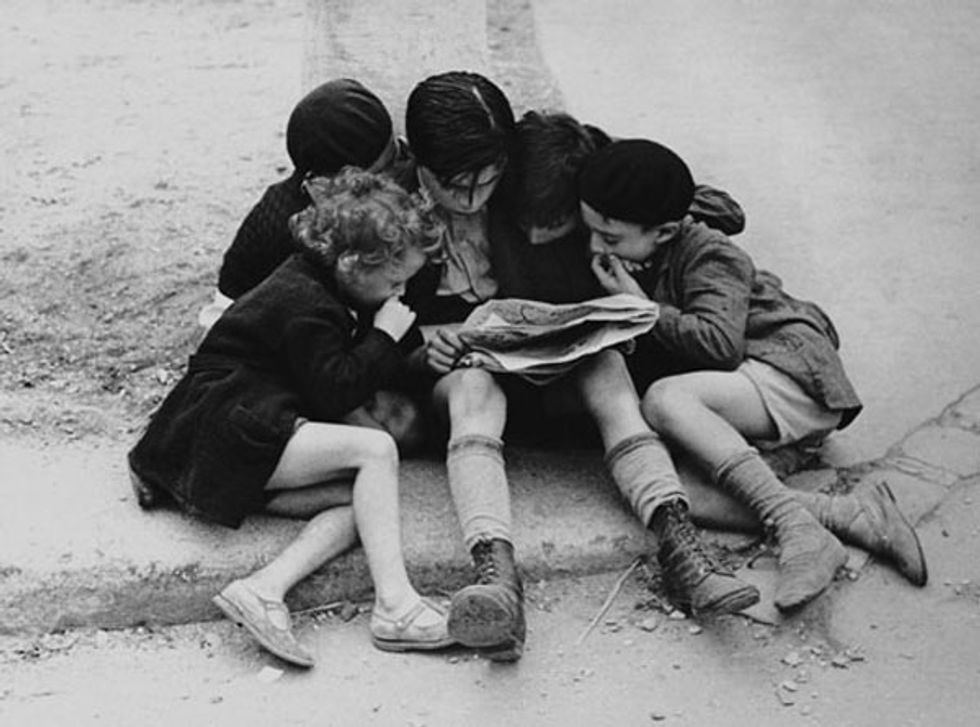 Things have quieted down in Ferguson and we have a holiday weekend, so the New York Times is full of analysis-type stuff today. There's a pretty good piece onDemocrats' attempts to mobilize African-American voters who are outraged over Michael Brown's shooting (and another story about that effort in Ferguson, specifically). There's also longish story about the Chinese Communist Party's attempt to prevent Hong Kong from doing free-n-fair elections, which is both well-reported and interesting, but which we bet you won't read because it is not sexxay, you laggards. Go on, we dare you! You probably can't handle it! The big breaking news of the morning, we guess, is the St. Louis Rams' cutting Michael Sam, and if you read the New York Times for sports news, that's in there too.

How about more analysis stuff? ISIS is both medieval in its politics, and pretty darn modern in its use of social media, doing what the Times calls "jihad 3.0." Also, too, five years after everyone freaked out about "Death Panels" in Obamacare, insurance companies are increasingly covering end of life planning sessions, and the American Medical Association has recently requested that Medicare do the same. The Centers for Medicare and Medicaid Services is considering the proposal but not saying anything about how it may decide, so get ready for a Return of the Death Panels -- or not, maybe, since aging Boomers really want coverage for their visits to plan living wills and such. And here's some cheery news: "Temporary" jobs are becoming a bigger part of the employment picture, and we're all doomed (OK, we skimmed that one).

The Social Q's advice column is as terrible as it ever was, and fun to read because you can thank your personal deities (ours are Molly Ivins and George Carlin) that you don't know any people like these:

An old friend has a perennial problem being faithful to girlfriends. His current mate, whom he met while cheating on his former girlfriend, recently discovered a number of his dalliances. She decided to stay with him, but asked me to stop being friends with one of the women he cheated with. (I was not aware of the affair while it was going on, if that matters.) Trouble is, I am not that close with the girlfriend, but I’ve become quite friendly with the woman I’ve been asked to drop. Thoughts?

We can't really quibble with the advice -- "Simply ignore the request. You are not that close" -- and the suggestion that if the new GF continues to press the issue, it would be best to sympathize but add "You focus on your relationships, and I’ll tend to mine.” But yeesh, we're happy we don't have any friends who are apparently still in junior high school. Also, too, there is a question about diarrhea, right there in the Paper of Record:

A sweet friend, who is justifiably modest about her culinary abilities, had us to dinner at her house. The next day, when I called to thank her, she said her husband had been up all night, feeling queasy. I did not confess that I, too, had suffered symptoms associated with travel in third-world countries because my friend (who has a low self-esteem thanks to a rough childhood) would be crushed. My husband viewed this as a matter of public health and thought I should have spoken up to prevent future episodes. What say you?

Again, the advice is spot-on (ewww), and even gets to the central weirdness of the question:

When your friend opens a food truck, trolling the streets of Stamford to hawk her extra-rare chicken cordon bleu, that is the moment for speaking up. But the morning after a modest dinner for four, where 25 percent of the guests have already complained of food-related illness, I would probably keep it to myself [...] But you have conjured a heroine almost as fragile as Laura Wingfield in “The Glass Menagerie.” Why smash her unicorn (again)?

Honestly, only here on Wonkette would we ever say, "Oh, yeah, that gave me the squirts, too!"

Which seems like the obvious transition to the Sunday Review section, and the note that Ross Douthat and Tom Friedman are off today, does it not? Instead, Roger Cohen has a column about Barack Obama's "hesitant foreign policy," and why mister we could use a man like Richard Holbrooke again.

Frank Bruni has a book-blurb as a column, about Sam Harris's upcoming Waking Up, which asks what it means to be "spiritual but not religious." It's every bit as fascinating and exciting as a Frank Bruni column should be, although Bruni does have this worthwhile question:

We hear the highest-ranking politicians mention God at every turn and with little or no fear of negative repercussion. When’s the last time you heard one of them wrestle publicly with agnosticism?

Hahaha, this is a hilarious question, seeing as how it is written about elected politicians in the United States of America Under God.

Maureen Dowd manages a third straight week without any mention of Bill or Hillary Clinton, largely because she's hanging out with a celebrity, Michael Sheen [one of those "M" names, whatevs -- Dok Z], star of Masters of Sex. Skip it, unless you like Michael Sheen a whole lot.

Nicholas Kristoff has the groundbreaking insight that white people, very often, simply Don't Get It, and he is eager to "push back at what I see as smug white delusion," which will probably win him some friends among the Bill O'Reillys of the world. After a litany of statistics that should be shocking, he says,

All these constitute not a black problem or a white problem, but an American problem. When so much talent is underemployed and overincarcerated, the entire country suffers.

Kristoff hopes that if more whites actually had black friends, they might become a little more aware of what reality is like for black Americans:

I was shaken after a well-known black woman told me about looking out her front window and seeing that police officers had her teenage son down on the ground after he had stepped out of their upscale house because they thought he was a prowler. “Thank God he didn’t run,” she said.

One black friend tells me that he freaked out when his white fiancée purchased an item in a store and promptly threw the receipt away. “What are you doing?” he protested to her. He is a highly successful and well-educated professional but would never dream of tossing a receipt for fear of being accused of shoplifting.

And he also says that a " starting point is for those of us in white America to wipe away any self-satisfaction about racial progress." Yes, we got rid of Jim Crow, in a legal sense, but maybe it also would be helpful "to acknowledge that the central race challenge in America today is not the suffering of whites."

It will be fascinating to see how Fox News addresses Nicholas Kristoff's shockingly racist anti-white column.