Atlanta Fire Chief Simply Does Not Care For Gay People, Wingnuts Are ON IT 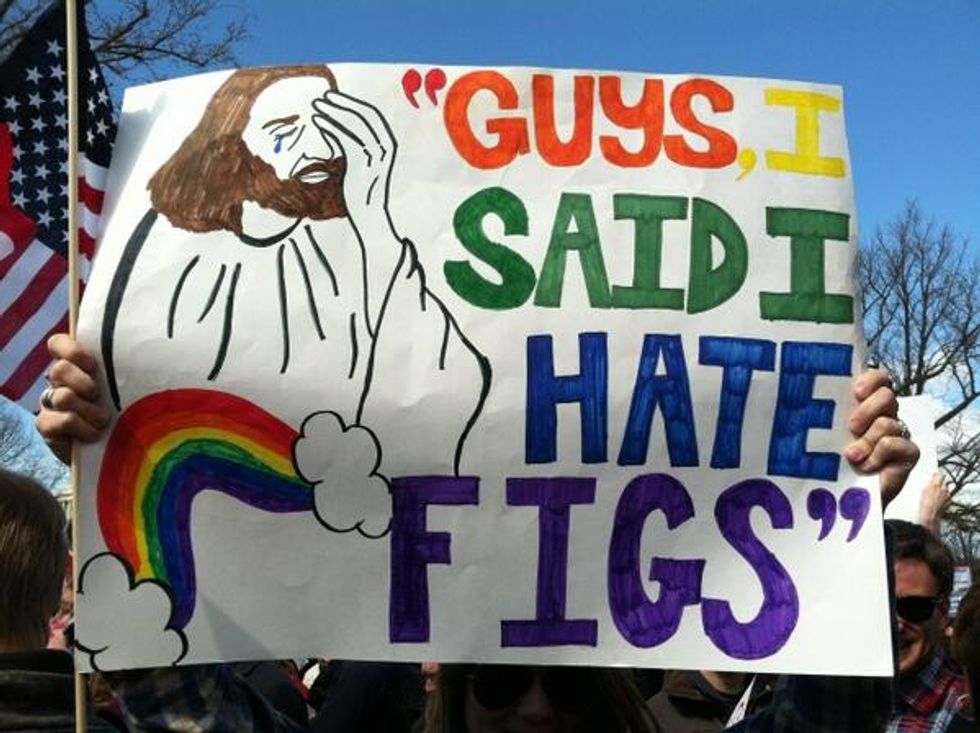 Today in religiously freedoming The Gays, we are hearing about the martyrdom of Atlanta Ex-Fire Chief and Soldier of Our Lord Kelvin Cochran, who was fired either for being a Christian hero for perpetual non-gay straightness, or for being a problem employee with abhorrent views who didn't follow procedure concerning Atlanta public officials who write books, you decide. Let's freedomsplore! Last fall, Cochran wrote a book entitled Who Told You That You Were Naked. Someone at ThinkProgress seems to have taken one for the team, hooray, and read parts of it, hopefully aloud to a laughing, jeering audience.

Would you like an excerpt from a section where Cochran opines on icky gay things that are gay and icky? Of course you would, here: "uncleanness — whatever is opposite of purity; including sodomy, homosexuality, lesbianism, pederasty, bestiality, all other forms of sexual perversion." There are even more words! Cochran goes on to describe sex by The Gays as a “vile, vulgar and inappropriate” act that “defile[s] their body-temple and dishonor[s] God.”

[contextly_sidebar id="W9eEz84Xav9rEHq1uarKoaAIxHQlcozN"]Cochran's book sounds very nice and should in no way be construed to reflect his own personal fantasies about his body-temple, shut UP. He self-published it (straight boy needs a better agent) and then generously gave out unsolicited copies to people he worked with in the Atlanta Fire Department. But oh no! That was not exactly the correct way for Cochran to handle his writing aspirations! One, he totally should have joined a writer's group and worked through some of that stilted language. And two, in Atlanta, if you want to write a bigoted manifesto about naked people's inappropriate body-temples, you have to FIRST clear it with the City Board of Ethics; THEN, if they approve your request, you are free to proceed with your very straight and biblical masterpiece, which you should not give to your co-workers if they don't ask for it.

When Atlanta Mayor Kasim Reed got wind of Cochran's literary tour de force, he was like, nope, nope, nope, nope, checked out the situation, suspended him, concluded Cochran hadn't followed procedure, and fired him. After an investigation into whether Cochran asked for or received authorization to write the book, the Atlanta Department of Law concluded that:

The Standards of Conduct provide a clear directive to “commissioners, deputy commissioners [and] department heads” to seek approval of the Board of Ethics before the department head “may engage in private employment or render  services for private interests.” No such approval was sought or rendered in the  publication of the book that is available on Amazon.com for purchase. [emphasis is Wonkette's]

But meanwhile, guess what else happened? Did you guess that the entire religious right persecution-industrial complex has fired all the way up? Because yes, of course they have! Disgruntled bigots rallied in Atlanta on Tuesday, claiming that religious freedom is dead, and how they can exist in their jobs if they can't religious freedom The Gays at all times, and Christians everywhere are probably going to be rounded up and tried by gay sharia law, who even knows, it is hard to listen to this crap. But one thing is clear: The terrorists have won, and they are gay, and we are not talking about France. Erick Erikson wrote some really moving blank verse about how Cochran's situation (bigot loses job for not following department procedure) compares to the Charlie Hebdo attack (12 people murdered by terrorists):

The terrorists did what had to be done to publicly destroy and ruin the offender.

So they demanded the Mayor of Atlanta fire the Chief of the Fire Department for daring to write that his first duty was to “glory God” and that any sex outside of heterosexual marriage was a sin.

And the terrorists won in Atlanta.

Tony Perkins of the Family Research Council jumped on the gay-terrorist-bandwagon, tweeting:

Have you been thinking lately that religious freedom doesn't mean the same thing it used to mean? Because we are pretty sure it used to mean "freedom to practice your religion without a ton of government interference." We are having a sad that this meaning got religioned into the new meaning of "freedom to act out your hatred and disapproval of The Gays during every single second that you are awake, and most especially in your place of business, amen." Do we think this new meaning of religious freedom has something to do with legalization of gay marriage pretty much everywhere (including, OMG, yesterday, even South Dakota)? Yes! We do think that! And the wingnuts are handling that development as well as you might expect, by trying to religiously freedom The Gays, all of the time, everywhere, for Freedom.

Stay classy, terrible people who are comparing this situation to the French massacre! At least now you know that The Gays are the real terrorists, because of how they walked right into an Atlanta fire station and complained 12 people to death.