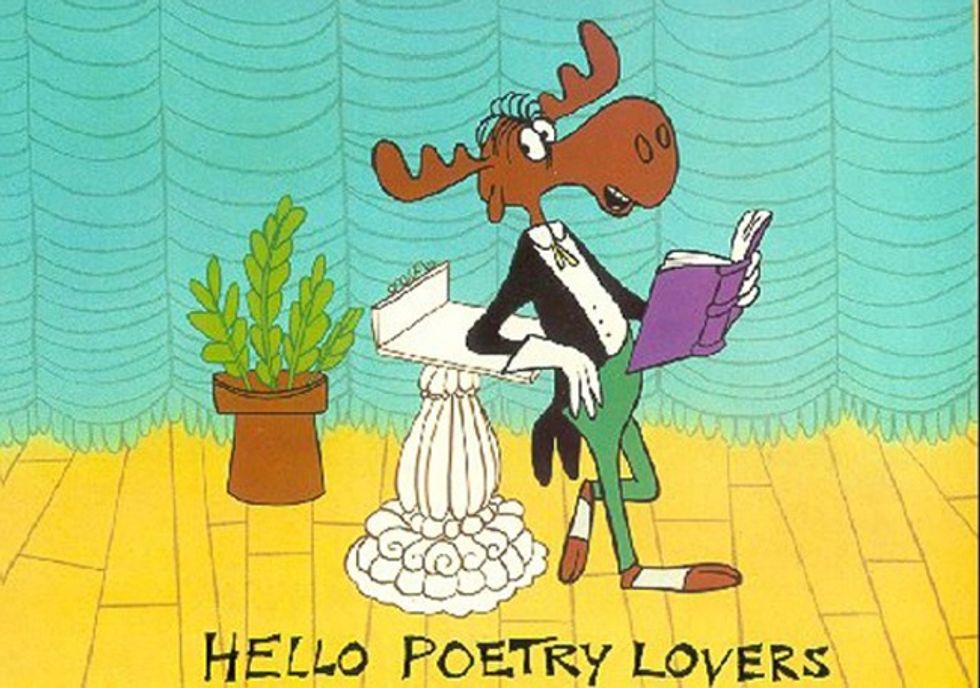 Greetings, Culture Vultures, Poetasters, rotten vegetables vendors, would-be Vogons, and of course Paula Nancy Millstone Jennings. The emergence (eruption? extrusion?) of that incredibly bad Trump Inaugural Poem, "Pibroch of the Domhnall," by self-published lyrical poetry genius and "celebrated American poet Joseph Charles MacKenzie of the Society of Classical Poets" has obviously gotten your creative juices flowing, or at least stimulated your gag reflex and peristalsis, so we must needs formalize this great moment of cultural ferment with an Official Wonkette Donald Trump Inaugural Poetry Contest. The rules are simple: Post your poetic effusions in the comments to this post (yes, even if you posted them elsewhere; we are not traipsing over three or four threads looking for entries) or email them to yr Dok Zoom with subject line "Poetry Contest" to doktorzoom at-sign wonkette dot com.

Also, too, keep in mind these "author's notes" by Joseph Charles MacKenzie, from the poem's official, officious website:

§ The refrains at the end of each stanza are to be recited by the Inaugural crowd.

§ A Pibroch is a rallying bagpipe tune and is pronounced like “PEA-brohgh.”

§ Domhnall, the Scottish form of the name Donald, is pronounced like “TONE-all”

§ Torquil was the royal progenitor of the MacLeods of Lewis, the outer hebridean island and birthplace of President Trump’s immigrant mother, Mary Anne MacLeod.

Entries will be judged on purely arbitrary criteria, but we're probably looking for elements such as funny, creative 'n' shit, not being yet another "Man from Nantucket" limerick, and most importantly, that delicate balance wherein your poem is intentionally, knowingly bad, without quite slipping over the line into stupid bad, given the stuffy self-importance of the great Joseph Charles MacKenzie, who is surely the Emmeline Grangerford of our age. Unless it's uproariously funny stupid-bad. Obscenity is allowed but not mandatory, and no, the words "Fuck Trump" printed several hundred times will not work, unless you manage to turn it into ascii art of Trump Tower. And maybe not even then. Also, this being a contest in honor of Donald Trump, outright bribery of the judges is fine with us; blackmail not so much.

To inspire you, a couple of starters:

This is Just To Say

I have repealed the health insurance you signed up for

and which you were counting on to treat that chronic condition.

I really wanted to cut taxes for my friends

And you don't really need that insulin

TOOK THE ONE WITH ALL THE PUSSY ON IT THAT LED TO THE RIVER FULL OF PEE, MY NAME IS DONALD TRUMP, I AM THE PRESIDENT NOW

And that has made all the difference.

You might also find comfort in the comments at the poem's official website, and at this reply to Mr. MacKenzie by True Scotsman and SF writer Hal Duncan. As a taste, the first couple stanzas:

From Scotland With Love

rank mediocrity of wank and shite

A decorated poet? Aye! A dick

be fine and fitting, a humungous prick

Oh, and the rest is awesome as well. Now get to rhyming, you filthy fuckaducks!

Earlier today, the Society of Classical Poets, the small literary organization that initially published the poem, posted on Facebook that Trump’s team “should” have it read at the inauguration.

As to whether Joseph Charles MacKenzie, traditional lyric poet, is sincerely an epic hack poet (or ipecac poet, as the case may be) or a brilliant troll, it's hard to say. God knows his webpage is self-important and self-indulgent enough to have been put together by a true crank, but it's also remarkably uncontaminated by verse. Yet even if he never produces another "poem," we remain thankful to Mr. MacKenzie for bringing some truly horrid poetry to life.