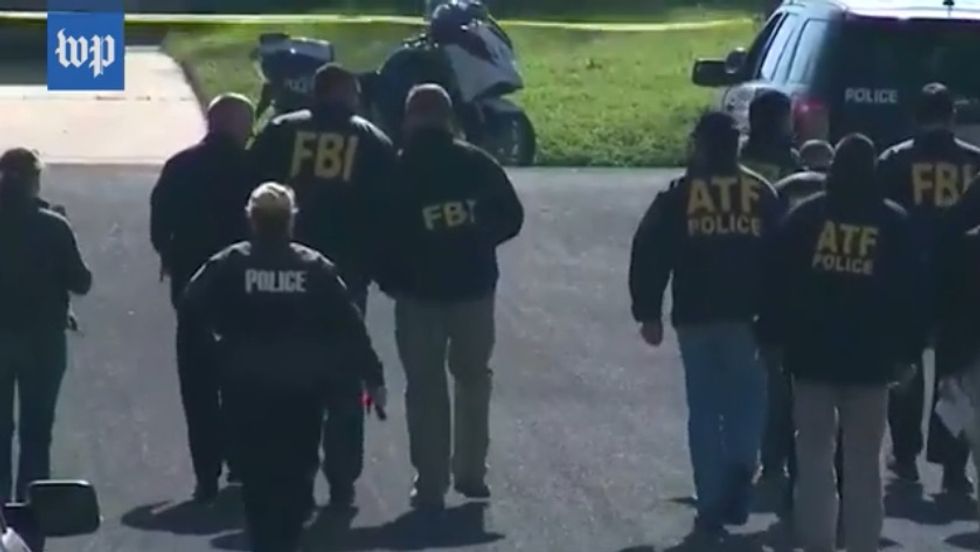 Or maybe bombings should be investigated deliberately by law enforcement instead of cranks on the internet.

There's been a fifth explosion linked to a series of bombings in Austin, Texas. Two black men -- members of the same African American church -- have been murdered so far, and an elderly Latina has been badly injured, with another two white cyclists injured Sunday. The explosion this time was at a FedEx facility in Scherz, Texas, where a package blew up shortly after midnight this morning, causing minor injuries to one worker, who was treated at the scene and released. The package, which contained nails and other metal shrapnel, had been sent from Austin and addressed to someone in Austin as well.

The first three bombs were left on the victims' porches and exploded when they were picked up; the fourth, which went off Sunday night, was attached to a "For Sale" sign and triggered by a tripwire. Brian Manley, Austin's interim police chief, said the Sunday attack suggested "a higher level of sophistication, a higher level of skill":

“What we have seen now is a significant change from what appeared to be three very-targeted attacks to what was, last night, an attack that would have hit a random victim that happened to walk by,” Manley said at a news briefing Monday. “So we’ve definitely seen a change in the method.”

It's not clear what the motive for the bombings is, although a hate crime is one possibility, since the three package bombs were left in eastern Austin, where the population is primarily black and Hispanic. The first bomb, which exploded March 2, killed Anthony Stephan House, 39, a senior project manager for a quarry firm. He was married and the father of an 8-year-old girl. He'd been planning to mentor kids this summer.

The second, on March 12, killed Draylen Mason, 17, a student who played bass in a youth orchestra and was taking community college classes while still in high school. He wanted to become a surgeon. His mother was also injured. A third bomb which exploded later the same day seriously injured 75-year-old Esperanza Herrera, who was visiting her mother to care for her; she lost some of her fingers in the explosion and doctors later had to amputate one of her legs. (Is this an appropriate place to note it's insane that in America, a 75-year-old woman is expected to provide home care for her mother? Consider that noted.) All three bombs appeared to have been placed by hand outside the victims' front doors, not mailed or delivered by a commercial service.

The fourth device was set up in an upscale neighborhood in southwest Austin, and injured two young white men, aged 22 and 23, who were walking along the road; they were hospitalized with serious but non-life-threatening injuries. The tripwire trigger meant that unlike the other bombs, which were addressed to particular people, this one was left out to kill or injure anyone who happened by. Manley said that despite the tripwire, the device had "similarities" to the first three that suggested the bombings were connected.

Christopher Combs, the special agent who heads the San Antonio FBI office, said more than 350 federal agents are in the Austin area and described the investigation as an "unprecedented response." Members of Austin's African-American community have expressed doubt about that, since police didn't issue a general warning to people to watch out for suspicious packages after the very first bombing on March 2 -- instead, that warning didn't come until after the March 12 explosions.

“If this happened in West Austin, then they would know by now,” said T.L. Wyatt, publisher of the Villager, a weekly newspaper in East Austin. “They didn’t give much attention to it.”

Yr Wonkette suspects Wyatt may be right about the amount of effort put into the investigation after the first bomb, but he may have too much faith in law enforcement finding the bomber quickly; it took the UNABOM task force 18 years to catch Ted Kaczynski, and that only after newspapers published his manifesto and Kaczynski's brother recognized the writing style.

But the Austin Police certainly seem to have gotten off on the wrong foot after Anthony House was murdered: They didn't reveal it was a package bomb at first, and even speculated that House may have accidentally blown himself up. Manley later apologized for the unwarranted speculation, both publicly and directly to House's family, saying that while it may have been an appropriate question to at least rule out, "it’s not something that needed to be said publicly." Until the bomber is found, any speculation about motives is mostly guesswork -- FBI profilers were initially both certain and absolutely wrong that the UNABOM suspect would turn out to be a disgruntled airline employee.

This seems a good time to note that white supremacists have been doing a lot of bomb plotting lately, and -- gee, not to get political or anything -- the FBI has recently focused on the threats of "black identity" and "Antifa."

After five explosions, two deaths, and five people injured (three of them seriously), Donald Trump hasn't found the time to say anything about this particular murder spree -- he's been too busy attacking the FBI. Then again, considering that the only thing he's likely to say is that we need to execute somebody as soon as possible (and since the bombs are in Texas, Build The Wall), that might be just as well. We'll keep you updated on whatever he says to make things worse.