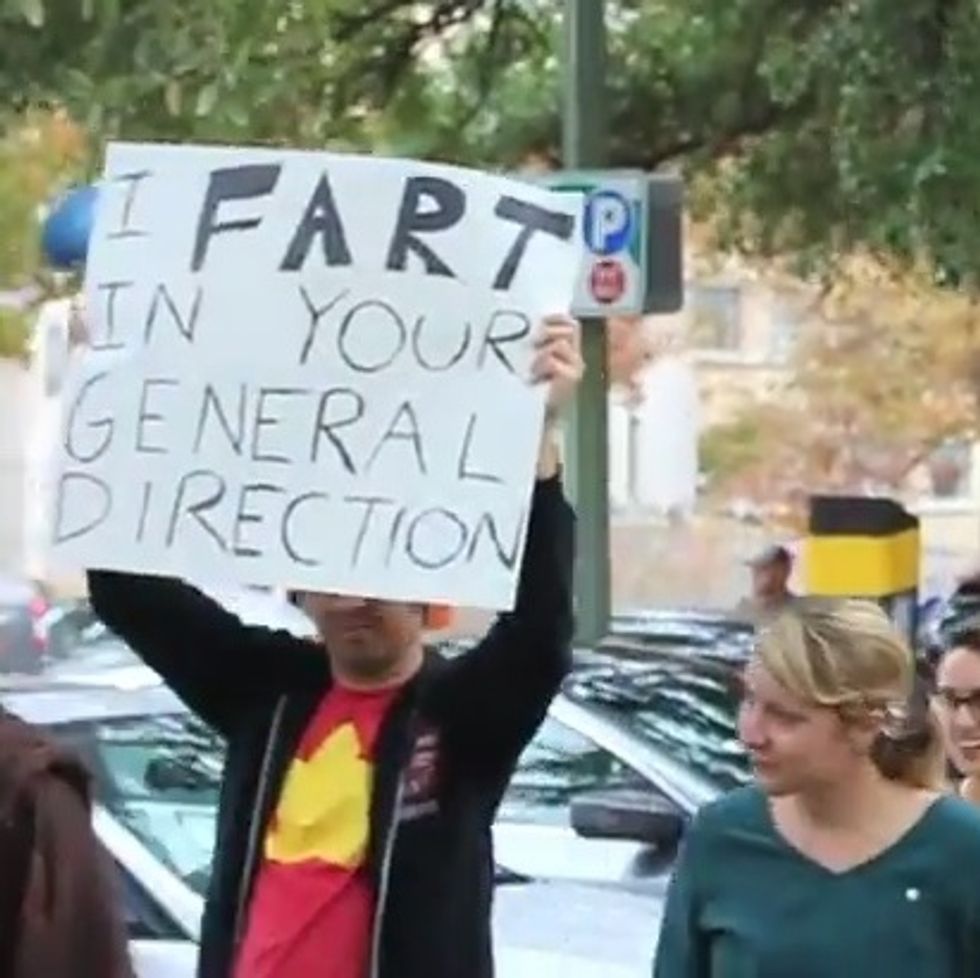 Go boil your bottom, son of a silly person.

The "mass farting" counter-protest was organized by UT alum Andrew Dobbs, who explained his motives thusly:

This isn't about guns necessarily. This is about scaring our community. This is about a choice between fear and a little bit of good humor. We are in a scary time right now and lots of scary things are happening, and some people want us to be more afraid.

"I choose to believe that fear is not the solution to the threat of our time. That laughing in the face of fear is a courageous act and toting a gun around everywhere you go, maybe not so much," he added. "When you come to my community, to the university that I love, and you threaten the lives of my friends, what I have to say is, I'm going to fart in your face!"

In addition to chanting "Texas farts" and "I fart in your general direction!" (a slogan whose meter is ill suited to chanting, so we're impressed), the counter-demonstrators carried signs with slogans like "Go play G.I. Joe elsewhere" and "A Gassy society is a polite society." They argued that a few fart noises were far classier than a mock mass shooting on the campus where one of the nation's worst mass shootings occurred.

The gun activists and fart advocates largely missed each other, however, thanks to the excellent strategic thinking of the pro-gun folks, who staged their "theatrical performance" of a mass shooting early, and in a different location than had been announced. Holding their publicity stunt at a time and location where nobody but the performers would see it made a very serious point, organizer Murdoch Pizgatti explained:

"On the other side of campus, the mock mass shooting happened. You don't get a time and place, you don't get a flier or an invitation for a true mass shooting. They happen unannounced," said Pizgatti. "And the response time for the police to get over here was well after the event took place. That also illustrates the point of these gun-free zones. You must protest yourself. You must be armed."

Ooh, that's deep. ThinkProgress has a video of the pretend slaughter, which is very dramatic, as a guy with a bullhorn narrates exactly how mass shootings usually happens: A bunch of defenseless victims hide behind a sign labeled "Gun Free Zone," crying "save us, gun free zone, save us!" The narrator solemnly explains that police response time averages between 8 to 12 minutes, as a bad guy in a bandana points a cardboard "gun" at a victim, who falls to the ground. Then someone squirts ketchup on the sidewalk next to them.

[contextly_sidebar id="wZcfABJDWFjM5vLekpGuCHzq0XheMRgQ"]It's a truly chilling argument either for open carry, or perhaps for acting lessons. After the "shooting," the dozen or so gun fondlers marched around a bit carrying real long rifles, as allowed under current Texas law. The state's glorious new open carry law, which will allow licensed firearm owners to carry handguns openly, goes into effect in August 2016.

Pizgatti seems like quite the wit, demonstrating that he wouldn't be constrained by some stupid laws that restrict his God-given right to let everyone see his Freudian complex:

Pizgatti, who was openly carrying a handgun Saturday, repeatedly cited a law passed in 2013 that protects those who "accidentally" expose their concealed gun. "Whoops!" he said, laughing.

While both groups claimed to have "won" whatever debate they were having -- "with the farters saying they effectively neutralized the impact of the mock shooting, and the pro-gun activists saying the counter-protesters made fools of themselves" -- we'd much rather hang out with the farters, who seem like a much nicer bunch of people, and who had the decency to appear on video in an easily embeddable YouTube format:

Give us mass fartings any day. If nothing else, you're far less likely to get into a tedious technical argument about the fine distinctions between various types of farts. Just as long as Open Farters exercise some common sense, and don't accidently fire a live round into their pants.