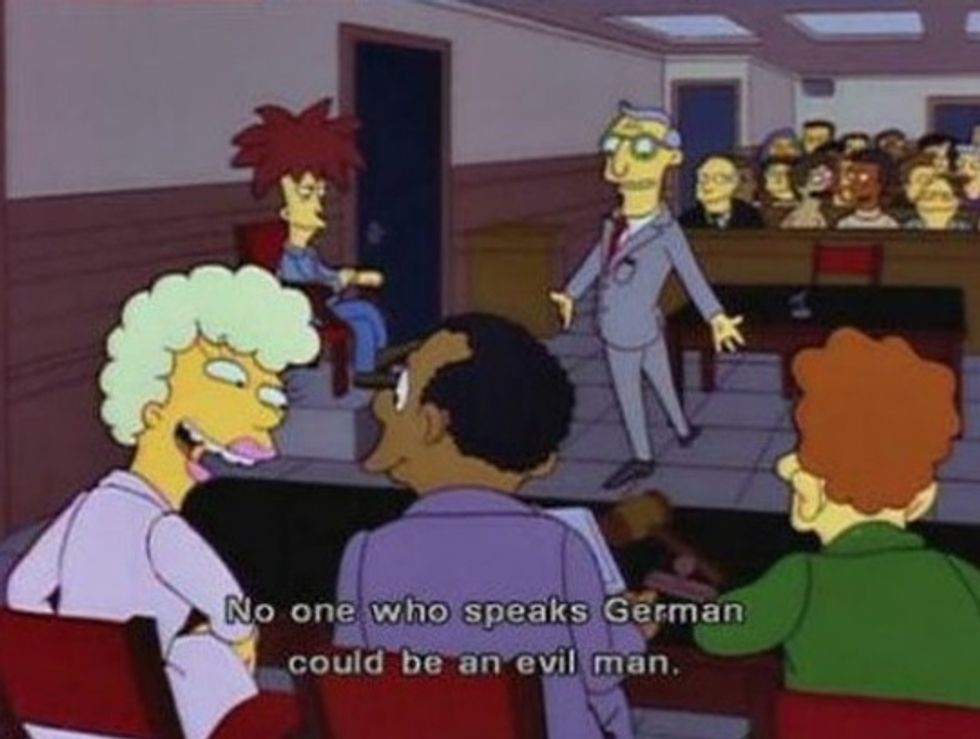 Yes, yes, the nice socialist speaks German too, please save your angry emails...

Hey, pretty good news from Austria: In a ridiculously close vote, Austria managed to defeat a right-wing, nativist immigrant-basher in its presidential election, choosing instead a big cuddly member of the Green Party running as an independent. Let's get the details from The Guardian:

Alexander Van der Bellen, a retired economics professor backed by the Green party, defeated Norbert Hofer of the anti-immigrant, Eurosceptic Freedom party a day after polling closed and only once more than 700,000 postal ballots -- about 10% of available votes -- were taken into account.

In a post on Facebook, Hofer wrote: “Dear friends, I thank you for your fantastic support. Of course today I am sad. I would have liked to have watched out for you as president of our wonderful country.”

Hofer wasn't the only sad little fascist to be deeply disappointed by the outcome. Dead Breitbart's Home For White Angst was quite put out by the development as well, only they had a slightly different take on that Hofer fellow in their lead story Monday morning:

Poor populist got his victory stolen!

So who is this Hofer guy who lost? Just your average far-right immigrant-hatin' nativist who has a fondness for unsubtle "flirtation with the iconography and language of the National Socialist movement," if you ask a Guardian analysis; in a manifesto for his Austrian Freedom party (FPÖ), Hofer declared the party's "commitment to a German people and cultural community,” longing for at least a rhetorical reunification with the Fatherland, although Hofer also denies he wants an actual merger with Germany. Say, you know who else wanted to unify Germany and Austria? On Facebook, Hofer lamented in 2015 that “since this so-called Germany was ‘liberated’ in 1945, it is ‘anyone’s’ country and is being governed by puppets” -- not that he means anything bad by that. In a TV interview, he refused to say he was "anti-fascist," specifically -- he prefers to describe himself as opposing all forms of extremism. Wink-wink, anschluss your mouth.

Or maybe Breitbart London's reporter Oliver JJ Lane has the more accurate description of Hofer and the significance of his narrow defeat:

Although defeated, Mr. Hofer remained gracious and hopeful. He said that while this particular election was over, all was not lost and the enormous popular support built for the party was “an investment for the future” [...]

The election, regardless of result will be a shock to Europe’s political elite, who have seen their sister parties beaten into also-ran position by a populist-right, anti mass migration movement, and a left-green political party. Discontent with the mainstream has been observed to be a driving force behind this move to insurgent political movements, with the migrant crisis having been a polarising force in Europe.

Nothing fascist at all about this gracious, hopeful fellow, no not at all. Also, Lane hints darkly, maybe the commies stole the election!

Freedom party secretary Herbert Kickl spoke out last week over the “unusually high number” of postal ballots requested, warning “[postal votes] repeatedly show inconsistencies”. The chief of the Freedom Party, Heinz-Christian Strache was motivated to remark today before the votes were even counted that there were “very questionable things happening” with the postal votes.

Damn -- who knew Obama and ACORN managed to steal even an election in Austria. No rightwinger ever lost a fair election. The comments, which you don't want to read, are all in agreement that the election was rigged, and that Europe is doomed to become part of the Islamic caliphate. Also, maybe George Soros did it. In any case, they all agree that the only way to save America from a similar fate is to elect Donald Trump. Unless it's already too late.