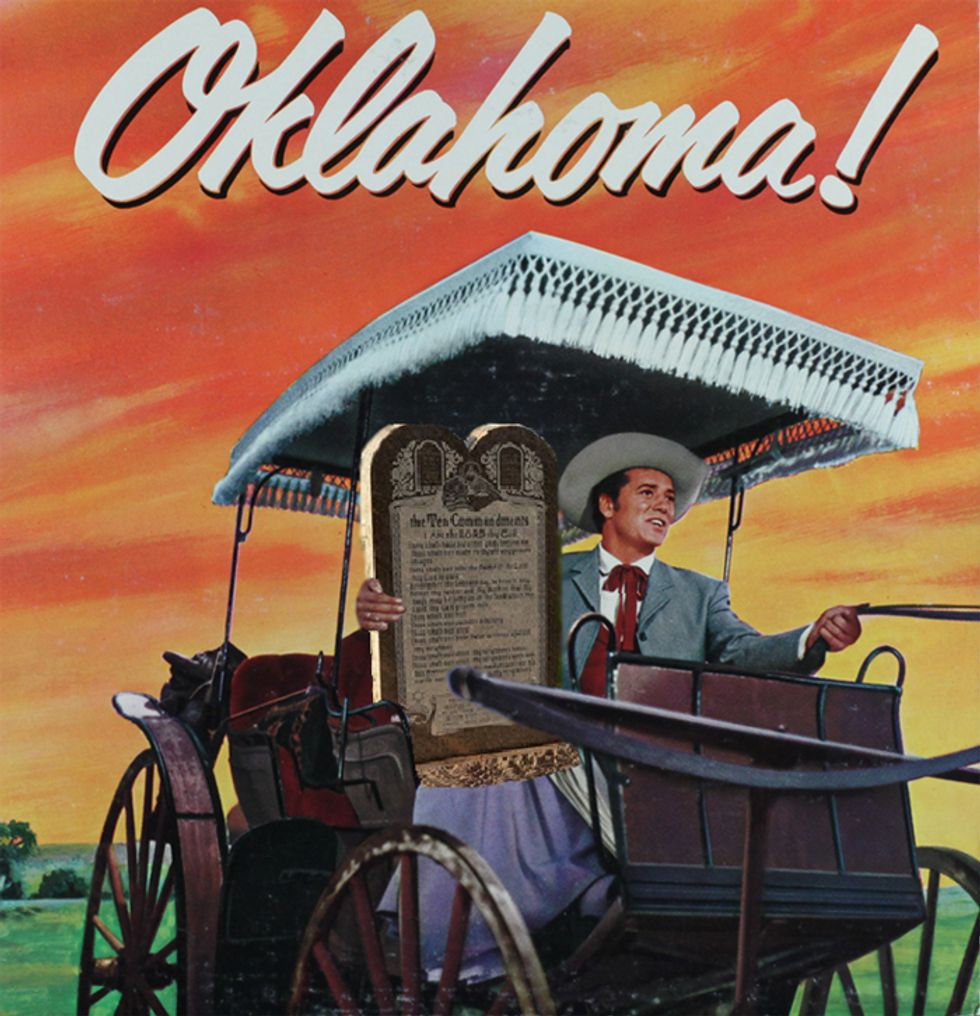 Oh, what a dumb fucking state.

Fire up the surrey with the fringe on top, because Oklahoma's rootin' tootin' mad, y'all! The state legislature is throwing all its turds at the wall, hoping something will stick, because it's just so mad about all the gays and the lesbyterians with their "equal rights," and even worse, the transgenders just drank a bunch of water and they're threatening to go to the bathroom!

[wonkbar]<a href="http://wonkette.com/592287/obama-could-be-president-for-life-but-he-doesnt-want-to-or-does-he"></a>[/wonkbar]So it's time for some anti-LGBT legislation, hooray! And also, to hilariously, stupidly, introduce a resolution calling for the impeachment of the president, who has been in office almost seven and a half years at this point, and is going bye-bye in January anyway. (UNLESS HE DOESN'T.)

[wonkbar]<a href="http://wonkette.com/601777/obama-administration-tells-schools-to-treat-trans-kids-like-people-furor-and-whining-to-ensue"></a>[/wonkbar]Let's look at the gay-hatin' bill, SB 1619, and then we will look at the legislature's dumbass resolution. The gist is that, since mean Barry Bamz Gender-Bender Obama decreed that schools all over the country (even in cow-tipping Oklahoma) refrain from discriminating against transgender kids, students (or their asshole parents) who have Sincerely Held Religious Beliefs, and thereby can't stand the idea of pooping next to a trans person, should be able to file a request saying that said pooping is against their religion, and please excuse them from it.

The FUN part is that, per this bill, the school could not say, "OK well, everybody else is happy, but you, entitled wingnut child, are not. So here, go use this one-seater bathroom if you're such a pussy." Haha no, the bill is actually written so that the religious freedom of the Bible-beating motherfucker would, in effect, discriminate against the trans kids:

We are wondering what exactly these Republican dipshit lawmakers (Senate President Pro Tem Brian Bingman and House Speaker Jeff Hickman, if you care) think the alternate "religious accommodation" would be. Do they have to spray the locker rooms for transgenders every time Johnny Jesuslover needs to take a shit? And as a religious accommodation, does that really help Johnny in his Walk With The Lord?

These fucking people. Oh, and the bill was filed as an "emergency," because these paint-huffing cousin-marriers feel it's "immediately necessary for the preservation of the public peace, health and safety." Who knew trans kids had such grotesque, all-encompassing powers?

So, the accompanying resolution. LOL. It is Senate Concurrent Resolution 43, and it was introduced by two other Republicans in the legislature (Sen. Anthony Sykes and Rep. John Bennett, as if gay-hating wingnuts are somehow unique from each other and need individual names, pffffft). It basically says WHEREAS Obama and Attorney General Loretta Lynch are mean assholes and WHEREAS transgenders are sooooo gross and WHEREAS how dare they threaten to pull our precious Title IX government moneys, just because we don't want to follow federal law, BE IT RESOLVED:

BLAH BLAH, GOOD LUCK WITH THAT.

The resolution also states that whatever Republican bumfuck yokel-fart who serves as Oklahoma's Attorney General (Scott Pruitt, like that even matters) is the boss of Obama and Loretta Lynch, and is hereby called upon to defend poor, put-upon Oklahoma from the Obamunistosexual Agenda.

To our knowledge, Lynch hasn't publicly responded to this bullshit, since it was just filed Thursday night, but we are guessing she has this look on her face right now:

[wonkbar]<a href="http://wonkette.com/601602/attorney-general-loretta-lynch-so-excited-about-kicking-north-carolina-in-the-ass"></a>[/wonkbar]Obama and Lynch's Justice Department are currently busy sticking their feet UP NORTH CAROLINA'S DUMB ASS over the lawsuit it just filed against the federal government, but we're sure they got extra feets available to dropkick Oklahoma from flyover country all the way over into the Pacific Ocean, or maybe directly into the sun, if the mood strikes them.