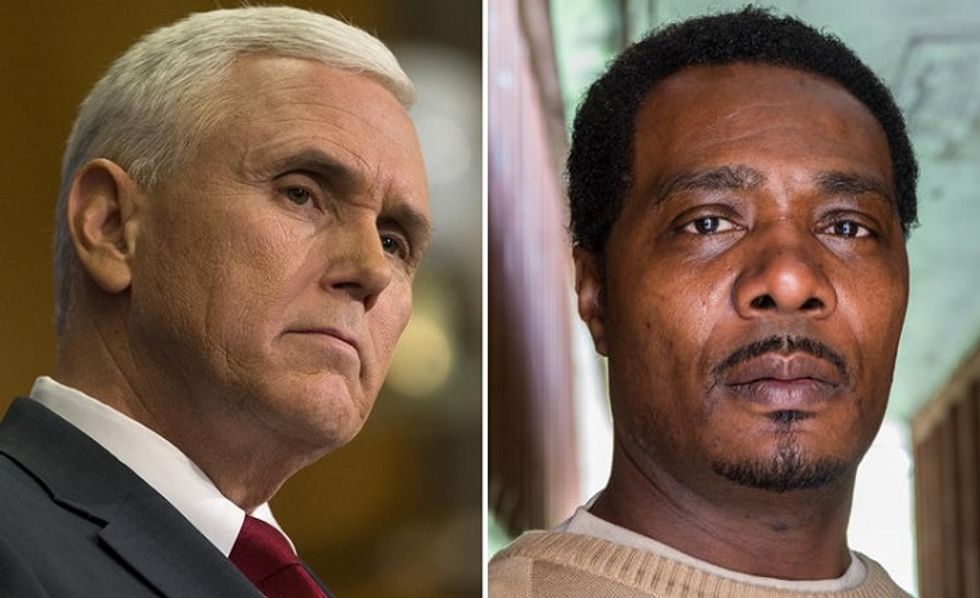 Gotta love a man who reveres the law so much.

It sure is good to know Mike Pence is against racial bias so much that he thinks we should never talk about it, and that he's a big fan of criminal justice reform, too. Otherwise we might mistakenly think the man's a completely unjust dick, seeing as how he recently denied a pardon for a wrongly convicted man who would rather like to have his improper conviction removed from his record, please, so he can maybe get a job and not be treated like a felon. Buzzfeed's Mike Hayes has the summary:

After serving 10 years of a 40 year prison sentence for an Indiana armed robbery and attempted murder, Keith Cooper was freed when eyewitnesses recanted their testimony against him, new DNA evidence showed he wasn’t at the scene of the crime, and a jailhouse informant admitted that he lied to investigators.

Well, that's a pretty clear-cut wrongful conviction, we'd say. So did the Indiana parole board, which "found unanimously that he should be pardoned and have the two serious felony charges wiped from his record." So why, two years after the board recommended a pardon, hasn't Gov. Mike Pence granted Cooper's request for clemency? Simple! Mike Pence simply has too much "respect for the judicial process" to interfere in what his office insists should be handled by the courts.

“To our knowledge, Mr. Cooper has not filed a petition with the courts in Elkhart County to determine whether post-conviction relief is available,” Gov. Pence’s general counsel Mark Ahearn wrote in a letter to Cooper this month.

You see, when Cooper's defense team introduced the new evidence, the judge didn't throw out his conviction, even though the evidence proved he hadn't committed the crime. Instead,

the judge offered Cooper a deal to be re-sentenced and be released with time served. By accepting this deal, Cooper withdrew a post-conviction relief petition attempting to have his conviction vacated. Cooper and his attorneys claim that when this petition was withdrawn, it prevented him from moving forward with his request to have his conviction thrown out by the court.

So on the books at least, Cooper is still guilty of the crime, although he was released from prison. A public defender wrote a letter as part of Cooper's petition for clemency, saying that by accepting the reduced sentence and withdrawing his petition to have the conviction vacated, Cooper already had exhausted his judicial options, but Pence's office didn't buy that, either.

“While Mr. Cooper’s counsel commissioned a public defender to submit a memo as to why post-conviction relief is not available to Mr. Cooper that is not dispositive, nor is it an official finding of any court,” Ahearn wrote in his letter to Cooper.

Ahearn wrote that this decision not to act on Cooper’s pardon request was “out of respect for the judicial process.”

The Chicago Tribune has a lengthy story on how Cooper and another man, Chris Parish, were wrongfully convicted, in separate trials, of a 1996 robbery in which two men broke into an apartment in Elkhart, Indiana, robbed a 17-year-old, and shot him in the stomach. There's all sorts of details about what a complete clusterfuck Cooper's prosecution was. When new evidence was introduced, Parish asked for another trial, but prosecutors dropped the charges instead; a federal jury later found police had violated Parish's civil rights and the City of Elkhart settled with him for $5 million. Cooper -- who had never met Parish -- instead accepted the reduced sentence and got out right away, but was still a convicted felon. Just to add insult to injury,

Attorneys for the city of Elkhart said the multimillion-dollar settlement with Parish was not an admission of liability. They noted Cooper declined a chance to prove his claim of innocence at a retrial.

"Because of his choice, he stands convicted of this crime," city attorney Vlado Vranjes said.

Mike Pence could make that unjust conviction go away with the stroke of a pen. But he won't, out of principle. And possibly, as Cooper's attorneys argue, since Pence dropped his reelection bid when he accepted Trump's Veep offer, it's just a lot more convenient for Pence to let his successor handle it. A spokesman for John Gregg, the Democrat running to replace Pence, said that Gregg is likely to pardon Cooper if elected, pending a full review of the petition. The Republican candidate, Eric Holcomb, didn't get back to Buzzfeed.

And just in case, Keith Cooper has filed a petition for a new trial. Gotta respect that judicial process.