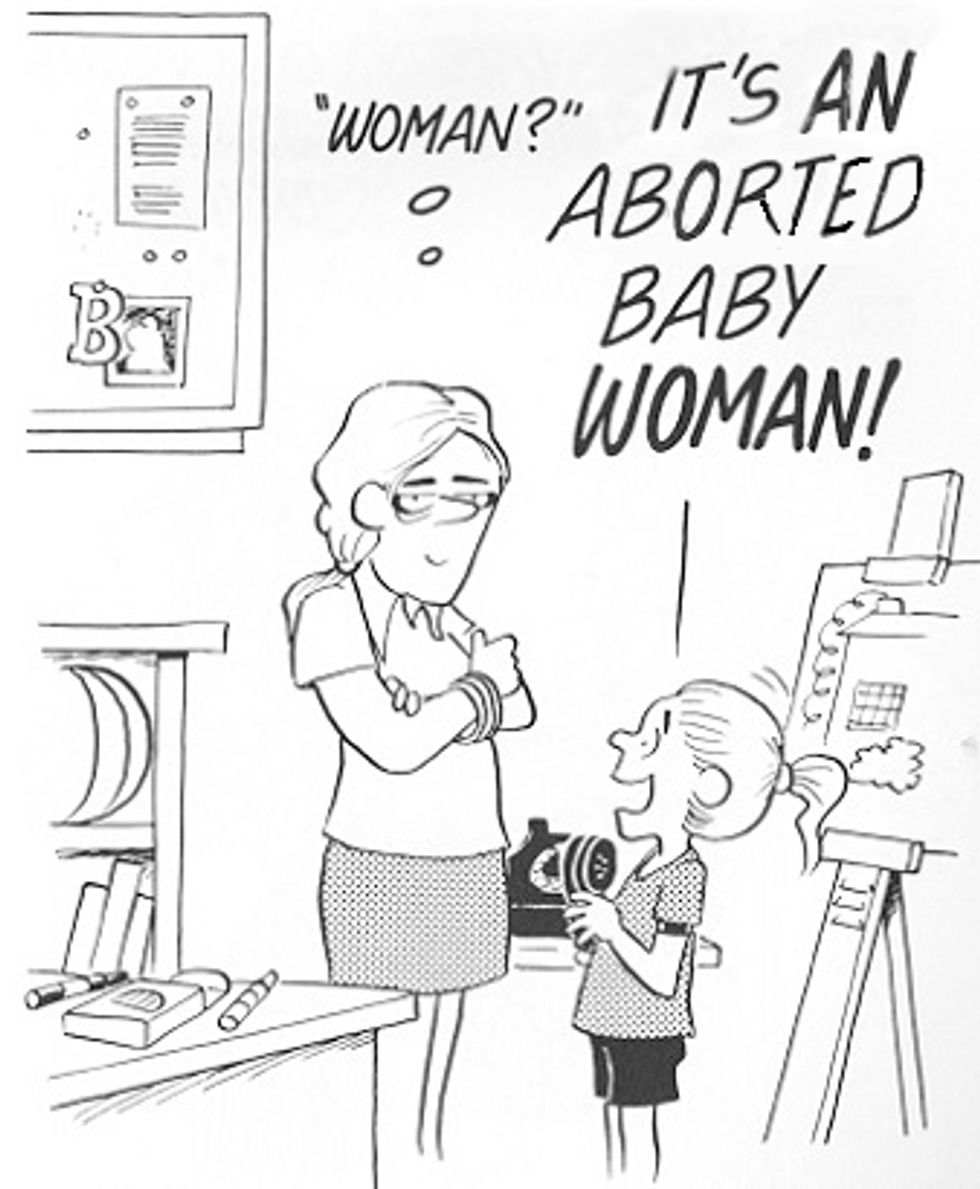 It always makes us discharge sad salty tears from our vaginas when “pro-life” ladies try to use feminism to be pro-lifey. It often involves using words all wrong, regurgitating “facts” that they “learned” that happen to be totally, demonstrably “wrong.” Really, it stings like vinegar, as much, if not more, than the #WomenAgainstFeminism who don't need feminism because it is mean to their boyfriends (and also their moms and grandmoms did all the feminism for them already).

Undress, with your eyes, this "pro-life" "feminist," for example: Her name is Aimee Murphy, she is 26, she is bad at words and also at thinking:

According to Murphy, “the central tenement [sic] of feminism is equality for human beings regardless of sex, gender, orientation, race, religion,” and that concept should extend to unborn children. “To devalue the preborn life simply because of their location or of their dependency is an act of discrimination,” she said. “In what good society does improving one side of human rights involve harming and causing violence to other human beings?”

Just because a baby happens to be geographically located inside of the shoddy apartment building that is your body, that is no reason for you to be sexist (and homophobic and racist, too, maybe?) against it. Good point, Aimee Murphy. FEMINISM!

Murphy was at a rally on Capitol Hill last week, cleverly activist hashtagged #WomenBetrayed, to demand that Congress defund Planned Parenthood. It's clever, you see, because doing healthcare to women's ladyparts (and their boyfriends' ladyparts too) is actually a betrayal of women, somehow. FEMINISM!

Who else was there? Oh, the usual suspects. Pro-life darling sweetheart prom queen fap material Lila Rose, who started harassing clinic workers when she was just a wee tween, spoke some words. Were they dumb? You tell us:

Sure, Lila, except how Planned Parenthood is a non-profit. Also, while your annual pap smear can be kind of uncomfy, with the cold speculum in there, "pain" is a strong word, and picking up your birth control? Well, that don't hurt a bit, especially not since President Obama made it free(ish, sort of, though really, he made it so ladies with health insurance don't have to pay copays, but let's not get lost in those details right now), THANKS OBAMA!

Lila Rose used to dry-hump David Daleiden while James O'Keefe home videoed it and gave tips. Daleiden is that other millennial prick behind the latest round of bogus GOTCHA! Planned Parenthood videos. They used to do that together, see, for "women." AND FEMINISM!

Was there more stupid on parade, for women opposed to women getting women's healthcare? Well, Sarah Palin was there, if that gives you a hint:

Was nobody at this tea party raised near the geographic location of a dictionary? Or is that really what Sarah Palin means, and Planned Parenthood angrily scolds women, via the actions of checking their boobs for lumps and terminating their unwanted pregnancies for them? Who cares? FEMINISM!

Here is another “feminist” who spoke at the rally to take away women's rights from them, FOR FEMINISM:

“Abortion hurts women. We will bring about a culture of love and a culture of life, where no women in her right mind would choose abortion,” one of the female speakers said at the podium.

Really, now, which is it? Do these “feminists” want to change women's minds, so that they never choose abortion? (Or pap smears? Or HIV testing?) Or do they want their (ahem, mostly male) anti-choice representatives in Congress -- like Sen. Rand Paul, he was there too, because he's such a feminist hero -- to deny women the right to choose in the first place? Which way, exactly, are these feminists feminisming?

Also, since when is it feminist to be real fuckin' dumb? Because saying REAL DUMB THINGS, like "abortion hurts women," is real fuckin' dumb. It is easy for feminists to do research on, to know whether it is a true thing (it is not) or an untrue thing (it is). Abortion is one of the safest medical procedures performed in the United S of A, with minor to zero side effects, and pretty much every single woman who has an abortion is real glad afterward that she did. If only the rest of life were as simple and easy as an abortion!

Things that do hurt women, if these “feminists” want to get in on being against that? Lack of access to regular pap smears. (Because cancer.) Lack of access to contraception and STD protection. (Because diseases; see also, DEATH.) Unwanted pregnancy. (Because depression, because addiction, because divorce, because poverty, because all those things “pro-lifers” warn are consequences of abortion, but are actually consequences of unwanted pregnancy.)

These are facts. You can Google them. Any self-identified feminist should be able to use her (or his, yay allies!) ladybrain to do that. And then she (or he, still!) can recite them, like how we just did, and also tell their friends and spread the word on MySnapFace or however. Because knowing what the zipless fuck you are talking about if you are going to open your grown-ass mouth in public, FOR FEMINISM, is a good thing. Also, it is very feminist.