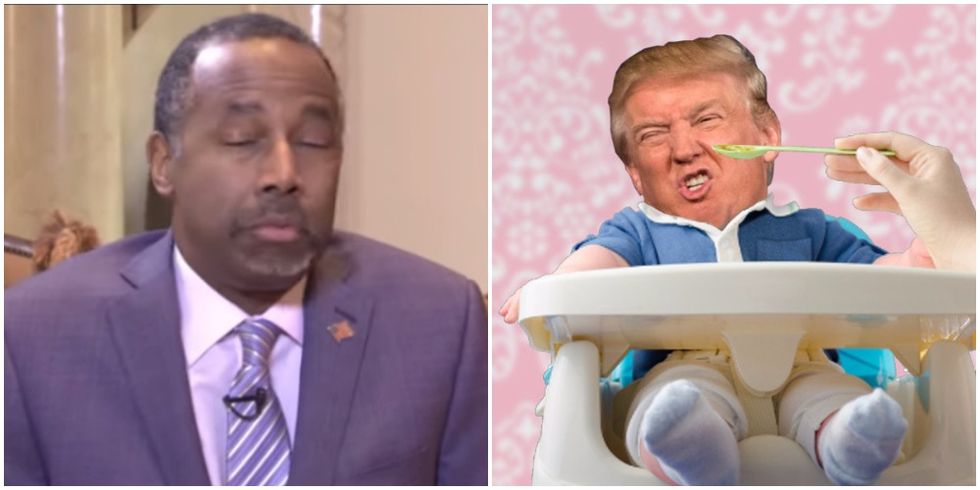 Carson is a doctor, so he knows what's wrong with Trump.

Oh good! Just what we have all been waiting for! The Dr. Ben Carson portion of Trump-Says-Racist-Thing-About-A-Judge-Gate! Yaaaaaay!

Carson explained, in an interview with Politico, that Donald Trump was not actually racist, he is just unable to control the words that come out of his mouth, and sometimes those words just happen to be kind of racist. Or something.

Carson, the most prominent African American in Trump’s orbit, says Trump is just spilling his unfiltered thoughts, not displaying latent racism. “He was probably talking out loud rather than thinking. That’s not a good thing to do when everything you say is going to be analyzed,” he said.

Carson agreed that an ill-considered comment by a president can move financial markets or create instability in the world, and Trump, he said, is beginning to recognize it as well. “He’s coming to that understanding,” Carson said. “I think he will change it, by necessity -- just the natural evolution of moving from the primary to the main event is going to necessitate a change.”

Yes, Donald Trump, a man who has been on this planet for almost 70 years is just now learning that you are supposed to think before you speak. He's coming to that understanding. He's learning. He's evolving. And it's very difficult for him because he has been living in a neverending episode of "My Super Sweet 16" for all of those years! He's been living in a bubble where, as a very rich person, he can say anything he pleases to people and they have to smile and take it and tell him he's wonderful. So, you know, he's a little handicapped in that way and we all need to be more understanding of that.

[wonkbar]<a href="http://wonkette.com/601084/ben-carson-so-mad-obama-sold-harriet-tubman-into-slavery-again"></a>[/wonkbar]And sure, Donald Trump may sometimes say incredibly racist things! But that doesn't mean he's actually racist, just that he thinks it's OK to say racist things. For reasons other than being a racist person! AND BESIDES! Ben Carson definitely knows who the real racist is, and it is Barack Obama, for selling Harriet Tubman into slavery again. Bad Obama!

And another thing, what alternative do we have, other than Donald Trump, if we want to restore our Traditional American Values?

“You know what I say to people who say that? I say, what’s the alternative?” Carson told POLITICO. “Look at where we are as a nation right now. We are moving full speed ahead on the progressive train, heading off the cliff. I mean, somebody 30 years ago, if you tried to describe America today, they would say, ‘get out of here.’ Are we going to continue on that train? Or do we want to get back to the more traditional values.”

Yes! Traditional American Values like racism, sexism, adultery, buffoonishness, rudeness and greed! So much better than like, letting gay people get married and all the other horrible things that have happened on this crazy progressive train!

[wonkbar]<a href="http://wonkette.com/595704/ben-carson-insists-he-really-was-a-teen-thug-stabs-cnn-reporter-to-prove-it"></a>[/wonkbar]In this interview, Carson explains that Trump doesn't know yet how to control his temper when someone says something that upsets him, which is a thing Carson can identify with. After all, he did pull a knife on his mom that one time! Supposedly! Of course, this isn't a problem because he will for sure figure that out, and also change his entire personality, once he is President! He's a growing boy! Just going through a stage! Surely he will mature before he has access to bombs and things. Surely.