Badass Baltimore Lady Will Make Yard 'Relentlessly Gay' As She Wants, Thanks 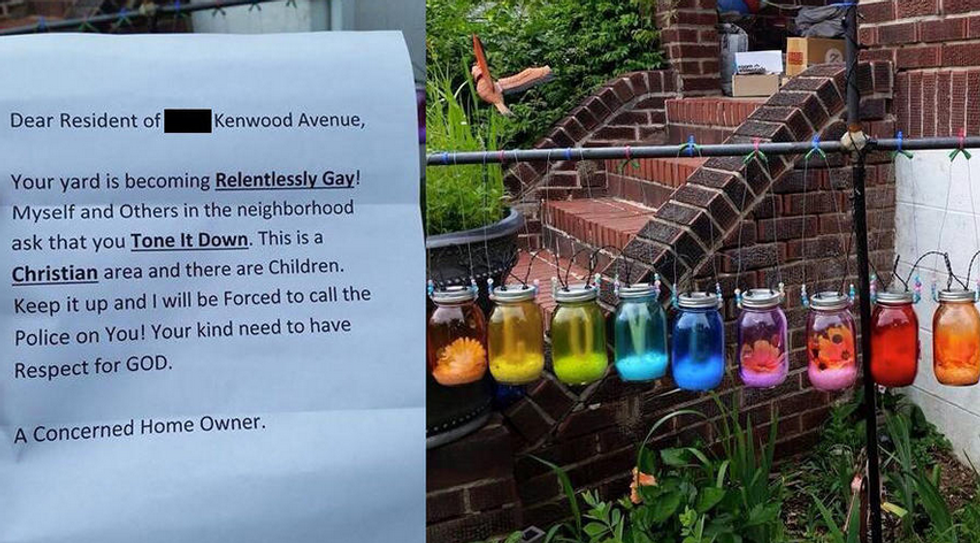 Here is a joyful story to distract everyone from all the sad murder for a moment! A lady in Baltimore named Julie Baker got the above note from some asshole fundamentalist Christian who lives in her neighborhood and is probably lowering everyone else's property values, by being an asshole fundamentalist Christian. Baker was apparently unaware that her Relentlessly Gay yard was offensive to GOD and the Christians in her area, but is she going to Tone It Down? Absolutely not, Bye Felicia to ALLATHAT.

Instead, one of Baker's friends sent it to George Takei, and you know what happens when he posts things on Facebook: ALL GAY HELL breaks loose, and the damn thing has gone viral, with people from sea to shining sea literally LOLing at the anonymous "concerned home owner" who sent the letter.

Baker has decided to go one further, by setting up a GoFundMe to make her yard relentlessly gayer! She explains that the gay items in the yard that prompted the note were NOT, as we had suspected, a bunch of butt-sexing Christmas reindeer, but rather, a "set of rainbow jar solar lights hanging in my yard that spell out 'love' and 'ohana'," which is probably Hawaiian for "lesbian." But she needs MOAR GAY STUFF:

So, I am starting this fundraiser so I can work to make my Home even More "relentlessly gay"  If we go high enough, I will see if I can get a Rainbow Roof!

Because my invisible relentlessly gay rainbow dragon should live up there in style!

Put simply, I am a widow and the mother of four children, my youngest in high school and I WILL NOT Relent to Hatred. Instead, I will battle it with whimsy and beauty and laughter and love, wrapped around my home, yard and family!!!

Baker thanks everybody for relentlessly, gay-ly supporting her quest to defile her wingnut Christian neighbor, and we've gotta say, she's doing pretty well, considering that her goal was only $5,000. As of this writing, her tally is $32,115 and counting. Hopefully she'll take some of the extra money and use it to help LGBT kids who are hurt by people like her shitty neighbor. Or she can give it to Wonkette, that's fine too.