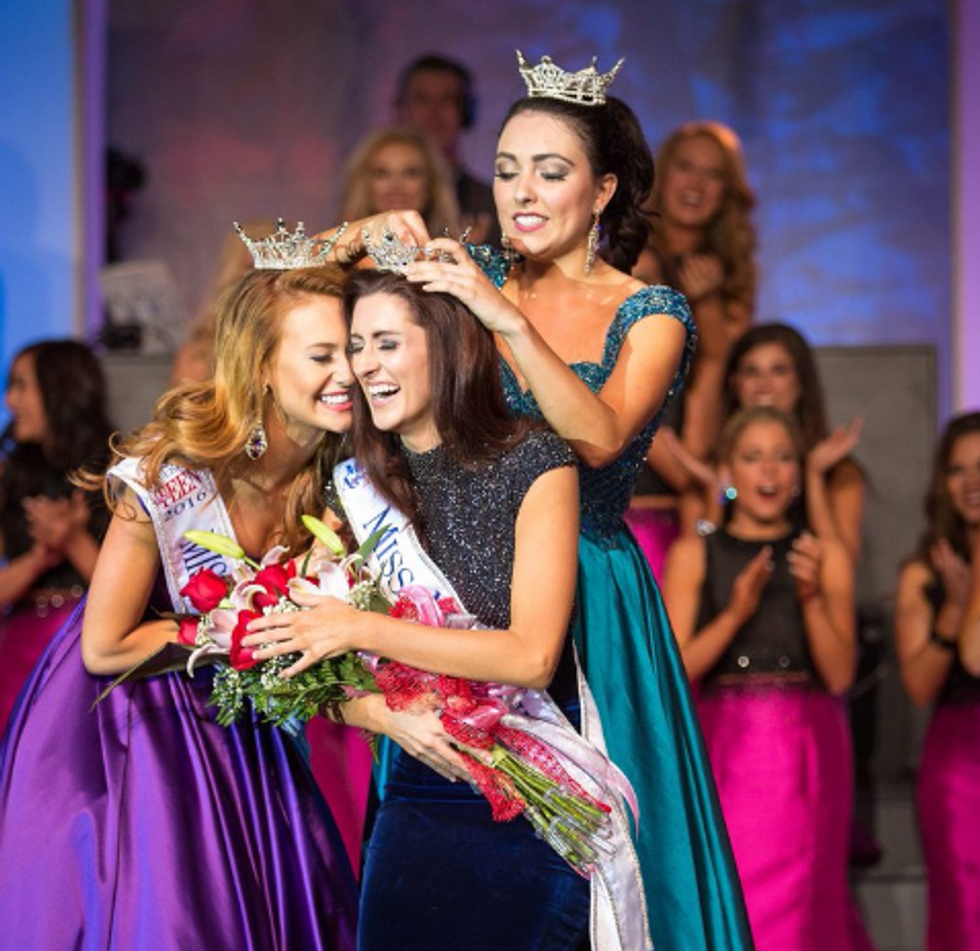 Erin is the one in the middle, WINNING THE THINGS. (Pic by photographerDavid Pickering. Hire him for a thing if you are in Missouri!)

It is Friday morning, which means you need a Nice Time. Wait, scratch that. It is Friday morning, which means you need the NICEST TIME. Did you know that for the first time ever in the history of all lady US American pageantry, an openly lesbi-nesian woman will be going to the Miss America contest? (Not Miss USA, which Donald Trump sold last September. This is Miss America, the one with the talent competition, what Gretchen Carlson won back before she signed her brain away with Fox News. WE DIGRESS.)

Introduce yourself to the new Miss Missouri, who is out and proud, long hair don't care, and probably see ya wouldn't wanna be ya!

All 30 contestants competing Saturday to become Miss Missouri were likely nervous: the winner goes on to the Miss America pageant — and so not only are the honor and glory of victory at stake, but also tens of thousands of dollars.

But St. Louis resident Erin O’Flaherty had special reason to be anxious: She wondered if being openly gay would hurt her chances.

“I had my concerns about it. Progressive is not exactly a word people might think of when you think Missouri,” O’Flaherty admits.

The crown that was placed on her head Saturday night said otherwise — as Missouri crowned O’Flaherty its first openly gay winner.

WOULD YOU LOOK AT THAT? All these glass ceilings getting broked this year! First lady to win the presidential nomination for a major party, first GOP presumptive nominee to ever call the Mexican population a bunch of rapists (probably), and now this!

As for Erin, she says she didn't really mean to be the first, she just sort of was:

Now O’Flaherty says she wants to use her moment in the spotlight to open eyes up to the LGBT community.

“I didn’t choose to be the first; I just am. Often you hear that our politics don’t always match our people and I think that’s really true,” O’Flaherty says. “What I’m going to try to do this year is open up people's eyes and minds a little bit.”

We bet she sure will! We hope she can start with the Missouri legislature, which is full of anti-gay Republican dicks. Maybe they will see that a bee-yoo-tiful, smart, nice lady named Erin is the official Miss Missouri, and they will learn to cheer her on in the Miss America pageant, even though they think gays are icky.

[wonkbar]<a href="http://wonkette.com/593047/missouri-republicans-demand-interns-stop-being-too-sexy-to-resist"></a>[/wonkbar]ALTERNATELY, since the Missouri lege is full of such horn-doggy teenagers that they try to pass rules to make their sexxxy interns cover up their sexxxy bodies so they don't accidentally get boners, maybe all those gross bastards will be like "Mmmmmhmm, HOT LESBIANS," and they'll be so excited about the Miss America pageant, they'll forget to pass anti-gay legislation. Look, we're just trying to be realistic here, because the Missouri lege is, again, full of hormonal jizz-pimply adolescent men whose mamas did not raise them right.

To be serious for one second, one cool thing about Erin is that her platform is suicide prevention, which she ties into The Gay Thing quite nicely:

At the age of 13, one of O’Flaherty’s close friends committed suicide. As she mourned she realized all the warning signs had been there, and over time she saw how suicide affects the LGBT community in particular.

“I don’t carry a rainbow flag with me everywhere I go, you know,” she says. “It’s not going to be my focus, but I certainly hope my presence will help people open up a little bit more."

Very nice. Maybe we will watch Miss America this year, for once! Wonkette wishes Erin O'Flaherty all the luck in the world, and thanks her for winning Miss Missouri so we could have this #NiceTime post this morning, in Jesus's name, Amen.