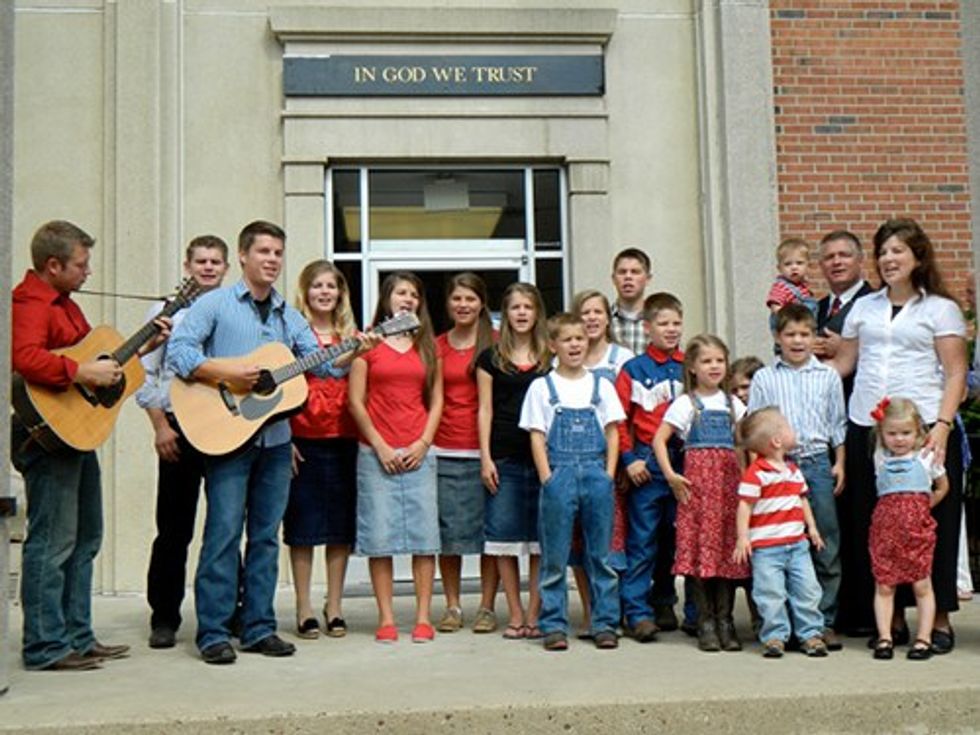 On Tuesday, a group of happy Christianscelebrated the dedication of a brand new plaque reading "In God We Trust" over the doors of the Anderson County Courthouse in Clinton, Tennessee. On Wednesday, a Native American defendant in an attempted murder case filed a motion to have charges against him dismissed because the courthouse is now a "temple of fundamentalist Christianity." Gosh, no one could have seen THAT coming, except maybe the four county commissioners who voted against the proposal.

The dedication ceremony on Tuesday "featured four pastors giving short speeches sandwiched between opening and closing prayers." One of the speakers, Mike Thompson, a Baptist minister, repeated the old saw that because the words "separation of church and state" don't appear in the Constitution, the idea doesn't exist in law, either:

“We do not separate God from government,” he said. “Separation of church and state really has nothing to do with whether or not we acknowledge God as a nation and as a people.”

Speakers at the event crowed that the installation of the signs represented a celebration of the majority and democracy, because fuck you, there's more of us is why:

“Whether you agree with this or disagree with this, the democratic process took place,” said Tom Byrge, director of missions for Clinton Baptist Association. “The majority of the U.S. citizens will continue to believe, and will not be ashamed to say, ‘In God We Trust.’”

“This is people standing up for what they believe in,” said Steve McDonald, pastor at Calvary Baptist Church in Oak Ridge. “We have a right to the democratic process and majority rule.”

The day after the dedication, Kenneth Darrin Fisher filed a motion asking that attempted murder charges against him be dropped, arguing that the inscription over the door and the all-Christian dedication ceremony constitute

“the endorsement by the (county) government of a particularized and fundamentalist view of Christianity which not even all people who regard themselves as Christian agree.”

Fisher's motion states that he follows "the 'Red Road' spiritual path" as part of his Cherokee heritage, but does not demand that his chosen brand of god-bothering be inscribed in granite over the courthouse doors.

County commissioners who had opposed the signs may be having a very quiet "I told you so" party, though probably not in public. Commissioner Robin Biloski said that her opposition to the signs had gotten her labeled an atheist, although she is actually just a person who's "proud of my faith, but it is personal.”

Shortly before the dedication, the commissioners received a memo from Anderson County Law Director Jay Yeager, who warned that the inclusion of only Christian prayers at the ceremony could “produce unwarranted legal challenges at the expense of our taxpayers.” Score one for accurate predictions!

Two other commissioners, Jerry Creasey and Myron Iwanksi, had offered a compromise proposal, in which "In God We Trust" would go over one of the courthouse's four entrances, while the others would have the state motto, “Agriculture and Commerce,” as well as “E pluribus unum” and “Liberty and Justice for All.” That proposal was voted down, and standing-room-only crowds at hearings were solidly in favor of the god stuff, which they can now spend tax dollars defending in court against challenges like Fisher's and others.

To better reflect the realities of the judicial process, we would like to suggest that the signs simply be changed to read "All Others Pay Cash."