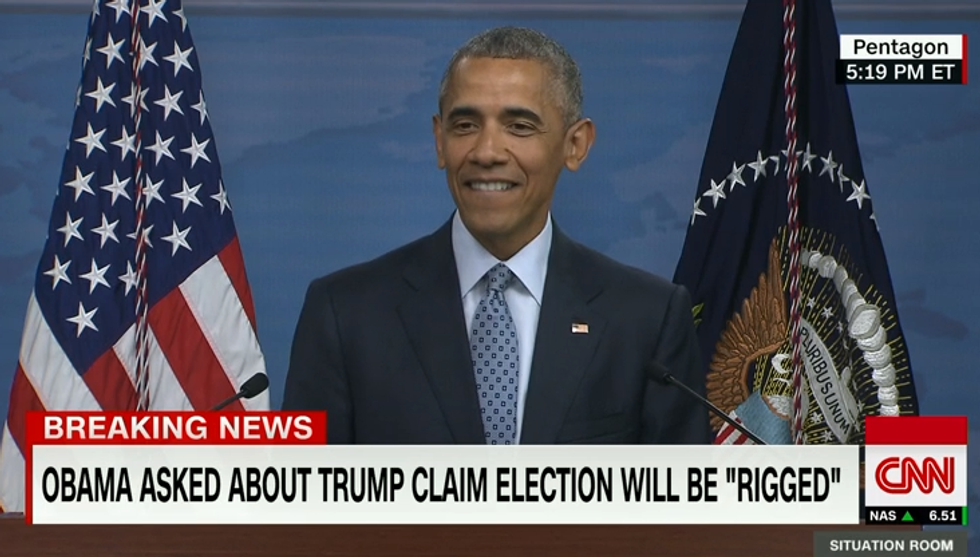 Remember how Thursday was Barry Bamz's 55th birthday? Well, if you watched his press conference yesterday afternoon, you could tell he was super excited that A) it was his birthday, which means birthday sex and 2) his vacation to Martha's Vineyard starts Saturday, which is TOMORROW. So Obama was obviously in the mood to LOL at Donald Trump (some more!) and not give one solitary fuck about saying what was on his mind.

Trump has been bitching that the election will be "rigged," by which he means everybody besides stupid people will not vote for him and he will lose. Here is what Barry thinks about that:

Of course the elections will not be rigged. What does that mean? The federal government does not run the election process. States and cities and communities all across the country, they are the ones who set up the voting systems and the voting booths, and if Mr. Trump is suggesting that there is a conspiracy theory that is being propagated across the country, including in places like Texas [pause for LOLs] where typically it's not Democrats who are in charge of voting booths ... that's ridiculous. That doesn't make any sense, and I don't think anybody would take that seriously.

[wonkbar]<a href="http://wonkette.com/605060/president-obama-calls-trump-dumbass-again-because-trump-is-being-a-dumbass-again"></a>[/wonkbar]Intelligent, sane people wouldn't take it seriously. Donald Trump does, because he is a crazy, sad dumbfuck who is shy about his baby hands.

The president's presser was primarily about his plans for kicking ISIS in the ass, and also kicking the Zika virus in the ass, if bunghole congressional Republicans will please pass funding for him to do that.

[I]f they want to be president, they've got to start acting like president. And that means being able to, you know, receive these briefings and not spread them around.

Obama also explained that all this bullshit about America paying Iran "ransom" with the cash we sent them is indeed a bunch of bullshit. For a long explanation of why, please read Wonk pal Charlie Pierce, who splained it so we don't have to.

And what about Donald Trump having the nuclear codes? Heh, Obama had a thing or three to say:

I obviously have a very strong opinion about the two candidates who are running. One is very positive and one is not so much ...

[wonkbar]<a href="http://wonkette.com/605100/why-cant-man-baby-donald-trump-use-nuclear-weapons-why-why-why-a-wonksplainer#SuYReZMLRz1zHbY5.01"></a>[/wonkbar]MM HMM, there's that damn Obama, acting like Americans are smart enough to figure things out for themselves, will he ever learn? Hey, remember how Donald Trump allegedly asked a foreign policy expert three times why he's not allowed to use our nukes, even though he REALLY wants to, and Wonket was forced to actually crash course on AP U.S. History to explain why the fuck that was a bad idea? Good times.

Having said all the important things about the United States of the Universe, Obama said he had to leave because he was going to be late for his "birthday dinner," which must be what the kids are calling it these days, KIDS THESE DAYS WITH THEIR SILLY EUPHEMISMS FOR BONING.

Here, watch the whole presser if you like things that are sexxxy: