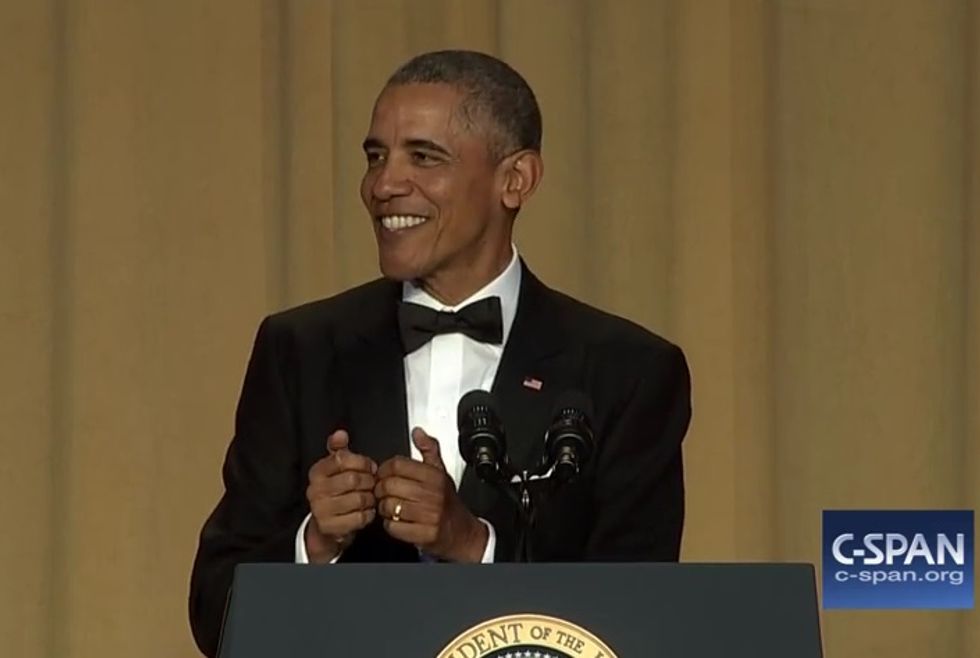 Just in case you missed it, here's Your President Barack Barry Hussein Bamz Obama in his eighth and final appearance at the White House Correspondents' Dinner, and after doing this seven previous times, he has this stuff down. It's really pretty impressive. Sure, he's got a staff of talented people writing material for him, but his delivery is spot on from the very first moments -- "Eight years ago I said it was time to change the tone of our politics. In hindsight, I clearly should have been more specific" -- to the very last Trump joke. And there were a LOT of Trump jokes. He went out with style, and now that he's gotten really good at this, leaves us wondering if future presidents are going to be able to measure up. As he reminded us, "Next year at this time, someone else will be standing in this very spot, and it’s anyone guess who she will be." Watch it again and realize how much you're going to miss this guy.

Larry Wilmore's speech was much more a hit-or-miss matter. For one thing, he was following one of the best presidential comedy performances ever, and unlike the previous speaker, this was Wilmore's first WHCD. A lot of his jokes at the expense of the press were funnier to those of us at home to the stuffed shirts in the audience -- "A little bit about me: I am a black man who replaced a white man who pretended to be a TV newscaster. So yeah, in that way, Lester Holt and I have a lot in common" -- and unlike his delivery on "The Nightly Show," sometimes his timing was off. But when he connected, he was on target and devastating:

And then there was Wilmore's final heartfelt line to Obama, “Yo Barry, you did it, my nigga,” which should be good for at least three weeks of pure white-hot anger from Fox News and the Wingnutosphere. Oh look, here it is now! Thank goodness we'll get to have another round of angry white people whining that they can't say that word about the president, at least not in public, because The Blacks are so racist. Enjoy your National Conversation on Race, America!