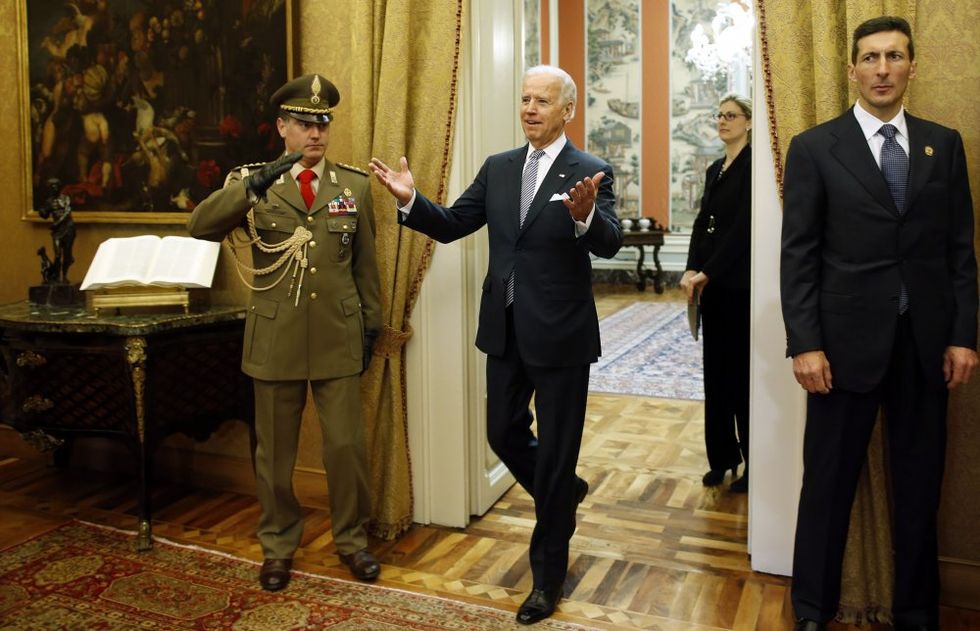 Did you all know Barack Obama is gallivanting around the world, telling the Hague he is going to blow up Manhattan we think (?) and then jetting off to see his fellow communist, New Pope, Francis I? Who does he think he is? Russell Crowe? We did not even know our Barry was gone, since all the news has been on Michelle Obama's jaunts to Communist China, where she is probably executing pro-democracy forces for sport, with tigers maybe. Which brings us to the important question: Are Barack Obama and Michelle Obama even allowed to be out of the country at the same time? What about the succession? WHO'S IN CHARGE HERE? (It is Al Haig.)

So here is Barry Bamz cold boring New Pope to death. Look at New Pope. LOOK AT HIM. He is looking at our CareBar and thinking that he is a center-right jerkoff capitalist who #wars on everyone all the time, and he is JUDGING HIM. But he is being nice about it. Maybe he is just shy. Just kidding, New Pope is not shy, he kisses severely disfigured people on their faces and makes phone calls like so, "Hey! It's me! The Pope! Oh, nothing, you?"

But Barack Obama has very nice manners, and gets up when the other dude joins them, so yay good manners Barry. Also, he did not even bow, so points for that! Even so, he is being all humble and stuff, like look at him hat-in-hand with his ingratiating smile, like, ooooh, nice Vatican, when New Pope does not even like the Vatican, he thinks it is some self-aggrandizing bullshit! You would know that, BARRY, if you'd bothered to read the one million articles about how New Pope is like "the Vatican? Fuck that."

This is how you meet a pope, Barack Obama.

Also, we could not hear any of their excruciating small talk, because of the camera shutters, so thanks a lot papa-razzi. (Get it? Ugh.) But it sounded excruciating.

Presumably, once the cameras were ushered out, il Papa gave Barry whatfor and reminded him he is supposed to be a communist 'n' stuff, for Karl Marx and Jesus, and then demanded he put Paul Ryan and Rick Santorum in jail, with drones. Maybe tigers. Definitely tigers.