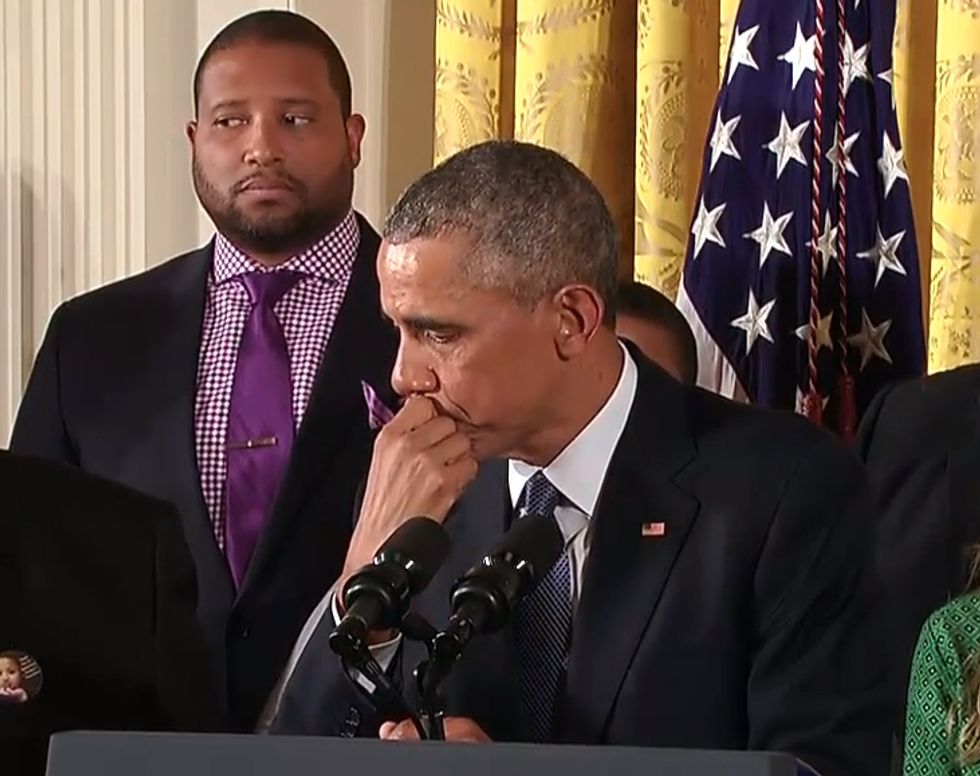 Now that Barack Obama has nullified the Second Amendment and grabbed all the guns, we'd like to look back at the speech in which he sounded the death knell of freedom for approximately the 1,485th time in his presidency. After noting this week marks the fifth anniversary of the Tucson massacre that killed six and injured twelve, including then-congresswoman Gabrielle Giffords, who attended the speech with her mother, President Obama said:

It wasn't the first time I had to talk to the nation in response to a mass shooting, nor would it be the last: Fort Hood, Binghamton, Aurora, Oak Creek, Newtown, the Navy Yard, Santa Barbara, Charleston, San Bernardino.

And he could have added so many more. Sure, it's a cliché, but there's something to be said for the power of a list that sounds like a funeral bell tolling. It reminds us how many times this president has had to speak after the massacres Americans inflict on each other, and of the tens of thousands of individual deaths by gunshot that can't be marked by a presidential speech, lest the president do nothing but give 80 speeches a day. In lieu of that, here's the speech he gave Tuesday:

Obama quoted Martin Luther King, saying when it comes to doing something about guns, "We need to feel 'the fierce urgency of now,' because people are dying." He added the mandatory disclaimer that must be stated when a Democrat talks about guns:

There is a ritual about this whole thing that I have to do. I believe in the Second Amendment. It is there, written on the paper, it guarantees a right to bear arms. No matter how many times people try to twist my words around, I taught constitutional law, I know a little bit about this.

I get it. But I also believe we can find ways to reduce gun violence consistent with the Second Amendment. I mean, think about it -- we all believe in the First Amendment, the guarantee of free speech. But we accept that you cannot yell "fire," in a theater. We understand there are some constraints on our freedom in order to protect innocent people.

[contextly_sidebar id="KDBXCTB7v8Vij4fWaoXZMNWSDiV8fAXL"]And of course, Obama noted that even before he announced his executive actions, thousands were wailing this is "the first step in some slippery slope to mass confiscation." Not so, he said -- he simply wants to expand background checks to prevent people who shouldn't own guns from slipping through gaps in the current system. Not that folks like one-man conspiracy theory generator Alex Jones were reassured; Jones had this impressive graphic posted to Twitter within moments of Obama's speech:

Are you scared yet? Buy another gun!

So what are the components of Obama's nefarious, unconstitutional scheme to confiscate all the guns? It's pretty radical stuff:

The package includes 10 provisions, White House officials said. One key provision would require more gun sellers — especially those who do business on the Internet and at gun shows -- to be licensed and would force them to conduct background checks on potential buyers. Obama would devote $500 million more in federal funding to treating mental illness — a move that could require congressional approval — and require that firearms lost in transit between a manufacturer and a seller be reported to federal authorities.

At the president’s direction, the FBI will begin hiring more than 230 additional examiners and other personnel to help process background checks 24 hours a day, seven days a week. Also, the Bureau of Alcohol, Tobacco, Firearms and Explosives has established a new center to investigate illegal gun trafficking online and will devote $4 million and additional personnel to enhance the National Integrated Ballistic Information Network.

In other words, complete confiscation of all firearms and an immediate imposition of martial law. There's probably a hidden clause canceling Christmas, too.

For those few who might be persuadable, Obama gave it the old college try (you can't see his transcripts, which are in Kenya). He pointed out -- to appreciative applause and laughter -- that under "the Affordable Care Act, also known as Obamacare," mental health treatment is covered the same as other illnesses. He added:

And for those in Congress who so often rush to blame mental illness for mass shootings as a way of avoiding action on guns, here's your chance to support these efforts. Put your money where your mouth is.

The most emotional section of the speech argued all constitutional rights, even the Holy Second Amendment, must be balanced against each other, because that's how the Constitution really works:

[Our] right to worship freely and safely -- that right was denied to Christians in Charleston, South Carolina.

Our right to peaceful assembly, that right was robbed from moviegoers in Aurora and Lafayette. Our inalienable right to life, and liberty and the pursuit of happiness, those rights were stripped from college kids in Blacksburg and Santa Barbara, and from high-schoolers in Columbine, and from first graders in Newtown.

[contextly_sidebar id="ZrArW1Va2CIou1jPTUbt7nhWA0B8spaD"]As we all know, this is where Obama cried like some kind of weak babyman, merely because 20 elementary school kids were gunned down:

First graders. And from every family who never imagined that their loved one would be taken from our lives by a bullet from a gun.

Every time I think about those kids, it gets me mad. And by the way, it happens on the streets of Chicago every day.

Obama's speech was met with exactly the sort of thoughtful, sober reflection you'd expect from the right. On Fox News, Andrea Tantaros explained it was all an act, because why would Obama give two shits about 20 dead first graders, or dead children in Chicago?

Tantaros nailed the Hypocrite in Chief for faking emotions she knows he's incapable of feeling, because he is a monster:

This is how many years? Almost eight years, he’s almost at the end of his term. And you haven’t heard him go to Chicago and really speak out about this issue ... But everything he's doing won't solve this problem. So I would check that podium for like a raw onion or some No More Tears. It’s not really believable.

Andrea Tantaros serves a useful purpose in our lives. She reminds us that even when we think we're as disgusted as possible with the damned human race, some new variation on political spite can still surprise us. Haw Haw, the president cried about dead children! What a faker!

Will no one cry for the guns that will never find loving homes through straw purchases? Don't Gun Lives Matter?

Ben Shapiro won't get all emotional over some kid. Remember, this is the man who welcomed his newborn daughter into the world by sneering at Barack Obama:

[contextly_sidebar id="WpVnmwCwIDfOQMMUG7Hd3pYPy3vMuNT0"]Yes, this is where we must remind you not to wish ill on Ben Shapiro or his daughter. He's only capable of empathizing with people he personally sired, but we're better than that.

Then there was Breitbart horcrux John Nolte, who Zaprudered the living fuck out of Obama's simulated human emotion over dead children:

The finger goes back and to the left

Since his application to the FBI Academy was rejected, Nolte's been watching CSI nonstop. Watch out, Quantico, here he comes! Also, the thing we said above about Andrea Tantaros? Triple it for Nolte, and pass the scotch. As ever, O Terrible Ones, keep The Rules in mind.

Texas Gov. Greg Abbott, who last week challenged Obama to Mole on his Labia, issued a press release Tuesday claiming Obama had "trampled the purpose and substance of the Bill of Rights by unilaterally imposing Second Amendment restrictions" and vowing Texas would never give up, never surrender in the face of federal tyranny. Which is not to say Texas doesn't love all the defense spending coming into the state.

In contrast to their usual hyperventilating about the death of freedom, the National Rifle Association seemed almost smug about how little the president's executive action can accomplish without Congress (a wholly owned subsidiary of the NRA):

“This is it, really?” Jennifer Baker, a spokeswoman for the National Rifle Association, told The New York Times. “This is what they’ve been hyping for how long now? This is the proposal they’ve spent seven years putting together? They’re not really doing anything.”

We'll give them a few hours. They should be able to twist it into a wholesale assault on freedom, motherhood, and the flag by this evening. And needless to say, the gun and ammo sales will hit new levels.