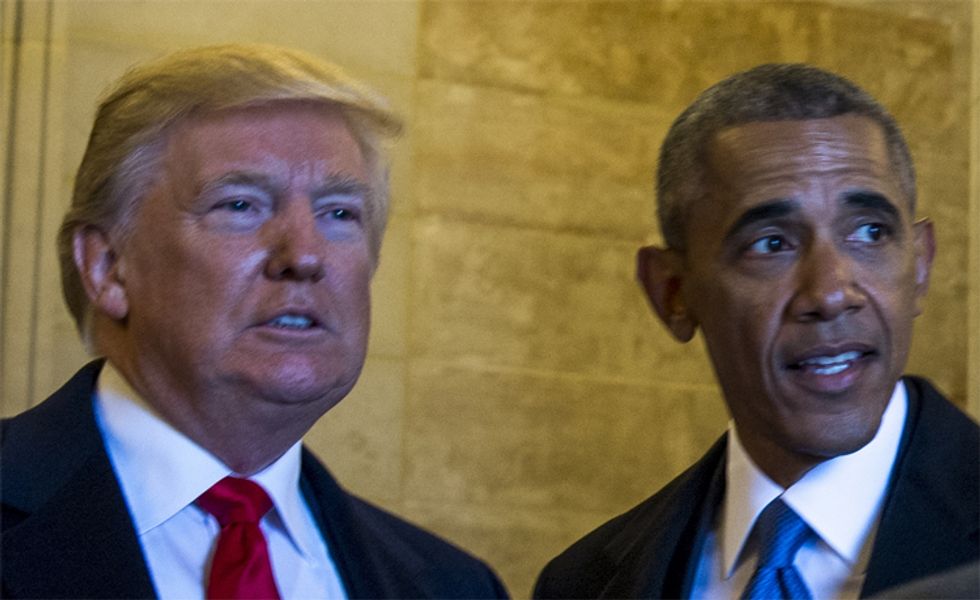 'You're wearing a tie. I invented ties. Stop copying me!'

Donald Trump had a little hissy fit this weekend about how Barack Obama is copying him, and it's not fair, so Donald is TELLING. Oh, and while he was at it he confirmed that he had indeed called the House version of ACA repeal "mean" in a closed-door meeting with Republican senators two weeks back.

The guy whose name is synonymous with Care has some thoughts on what the Republicans want to do to healthcare.

He actually used my term, mean. That was my term. Because I want to see, and I speak from the heart, that’s what I want to see. I want to see a bill with heart[.]

He won't necessarily complain if he doesn't get a bill with more heart, because if it passes, it will be terrific, whatever it is. But he certainly won't stand for anyone using his words. They're the best words, after all.

In the playground mind of Donald Trump, one of the worst crimes anyone can commit is to be a copycat of something Trump thought of first. Like that time back in 2015 when Mike Huckabee totally stole Trump's promise to never cut Medicaid. Boy, did THAT ever make Trump mad!

Bernie Sanders is back in the Senate, and HE'S GOT VISUAL AIDS.

Trump might remember that time, or the many other times he stated there would be no cuts to Medicaid. Bernie Sanders even made a big poster of the tweet. But now Trump's OK with cutting Medicaid, as long as it's done with heart, and as long as nobody steals his words, especially not that Kenyan guy who also stole the idea of colluding with the Russians. Not that there's anything wrong with that.

Trump then went on to complain that Barack Obama ate all the cake and didn't leave him any, that Barack Obama never got accused of violating the emoluments clause when HE ran hotels with his name on them, and that Barack Obama got to ride shotgun in Air Force One for four years after the 2012 election, even though Trump had clearly called it.

Yr Wonkette is supported by reader contributions. Please click the "Donate" clicky to give us money, even though Donald Trump thought of money first.